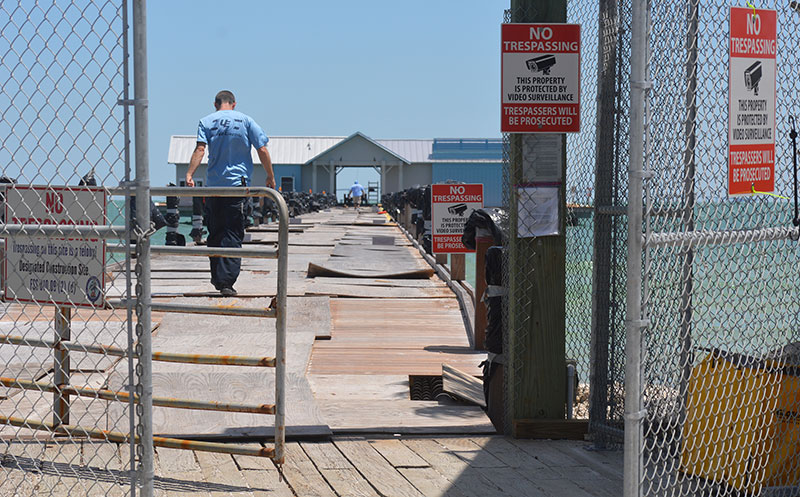 They had a winner.

And they had confliction.

Restaurateur Sean Murphy’s bid to operate the restaurant and bait shop on the new city pier was selected May 6 by Anna Maria city commissioners, but following a motion to rescind the bid approval, Murphy withdrew his bid May 10.

During the May 6 teleconference commission meeting, commissioners voted 4-1 to proceed with negotiations to lease the restaurant and bait shop on the city pier with Sean Murphy.

However, Mayor Dan Murphy, on May 8, set the agenda for a special meeting at 2 p.m. Thursday, May 14, to include a request from Commissioner Amy Tripp to rescind the May 6 bid approval.

Tripp declined to comment to The Islander May 8 due to possible conflicts with Florida’s Government-in-the-Sunshine Laws.

Since Sean Murphy, owner/operator of Beach Bistro, Doctor’s Office and Eat Here, all in Holmes Beach, withdrew his bid, the commission will now face options May 14 on authorizing the mayor to start lease negotiations with the only other bidder — Mike Ross, co-owner of the Ugly Grouper restaurant in Holmes Beach — or entering a new proposal process.

The public can download an agenda for the teleconfernce with directions for attending from the city website, cityofannamaria.com.

In a May 10 text conversation with the mayor, Sean Murphy stated due to concerns over the spread of the novel coronavirus, “the hospitality industry has been turned on its head.”

In response, the mayor thanked Sean Murphy for bidding, said he would pass the withdrawal request to the commissioners and noted the message as confirmation of a withdrawal for the bid.

When lease negotiations with Mario Schoenfelder, pier tenant since 2000, fell through in January, the city issued a request for proposals for the restaurant and bait shop on the T-end of the pier.

Schoenfelder’s lease expires at the end of December, which is about the time the city anticipates a new tenant could open the restaurant and bait shop.

Sean Murphy and Ross were the only two who submitted proposals to operate the pier facilities and they both participated in the May 6 teleconference call.

According to the materials provided by the city, commissioners were asked to evaluate the bids based on six criteria:

The mayor and consultant Doug Sullivan, former general manager of the Sandbar restaurant, analyzed the bids and provided commissioners with their analyses.

The criteria were placed in order of importance, with annual base rent being the most important factor, according to the mayor.

For an alternative rent formula, Murphy offered a flat rent of $168,000 per year or 5% net of sales.

The mayor said, according to Sullivan’s analysis, the pier revenue likely would be $3 million-$4 million a year, with a “sweet spot of $3.5 million.”

Regarding local presence, the mayor and commissioners agreed both bidders have contributed equally to the island community.

However, on the categories of corporate experience and past performance, the mayor and commissioners said Sean Murphy had an edge, with high ZAGAT Survey ratings and accolades from Florida Trend magazine and the James Beard Foundation, compared with positive social media reviews for the Ugly Grouper.

On financial ability to perform, Mayor Murphy said he did not ask for a credit report, because it was not necessary for the bid phase.

The Ugly Grouper stated it has a $2 million line of credit.

At a Feb. 26 pre-bid meeting, the mayor estimated the size of the covered lease space, including the bait shop and breezeway, at about 4,600 square feet, with usable interior space at 3,712.5 square feet.

The restaurant could seat about 150 people, depending on the configuration, he said.

The mayor said the building is an “empty shell,” with the plumbing and electric roughed in, and the successful bidder will be responsible for the buildout.

The mayor told The Islander May 8 that the primary items remaining on the city’s punch list are completion are the bathrooms, walkway lighting and air conditioning for the bathrooms and bait shop, which are set to be completed by May 15, barring days off for inclement weather.

The new pier was built to replace the pier that opened in 1911 but was closed after damages from Hurricane Irma in September 2017.

Demolition then occurred and construction on the new pier started in 2018.

Although construction nearly was complete as of May 8, the city planned to wait to open the pier to fishing and sightseeing until officials determine the novel coronavirus impact has been significantly decreased in Manatee County.

City officials hope to have the restaurant and bait shop open in late 2020 or early 2021.