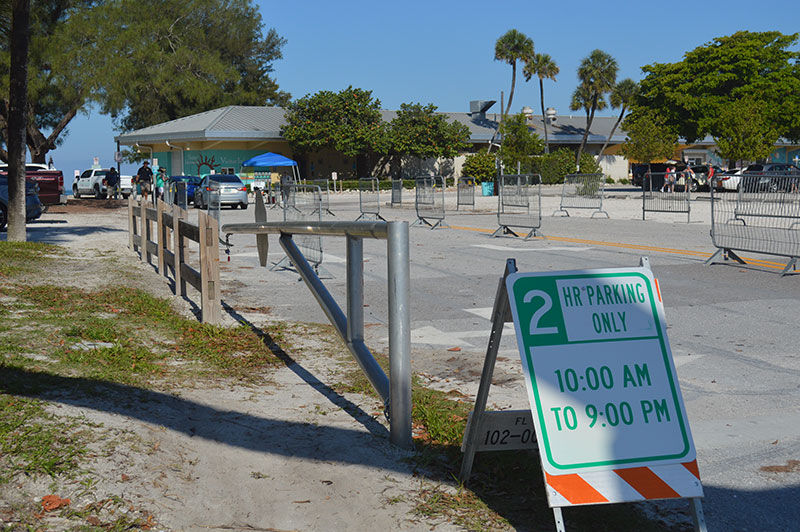 “So far, so good,” Bradenton Beach Police Chief Sam Speciale said May 6 of Manatee County reopening the public beaches May 4.

The same day Coquina and Cortez beaches in Bradenton Beach and Manatee Public Beach in Holmes Beach reopened with reduced parking and two-hour limits, Gov. Ron DeSantis’ safer-at-home order was revised and some businesses — restaurants and retail stores — were allowed to open with 25% capacity.

While law enforcement in the island cities was not responsible for managing the public beach parking lots, the BBPD and Holmes Beach Police Department watched over beaches and city streets for an influx in traffic and also monitored businesses to ensure compliance with social distancing.

Speciale said May 6 that county code enforcement had “done a great job” of handling parking and his department saw no overflow of illegal parking.

Holmes Beach Police Chief Bill Tokajer said May 6 that the city had some problems with people parking in private spaces and commercial parking lots.

He said beachgoers apparently parked at Publix, 3900 E. Bay Drive, but management hadn’t complained.  “People need to know that if they park on private property, they can be towed or ticketed,” Tokajer said. “People wouldn’t want someone to park in their driveway, so they should know it is not OK to park at someone else’s business — or their residence.”

He said a vacation rental manager contacted the HBPD after observing people parking a vehicle at a property where there were no authorized guests.

“They asked us to go and ticket them, so we did,” Tokajer said.

Additionally, he said officers asked large groups to leave the beach on a couple of occasions.

Anna Maria Mayor Dan Murphy said, “No major issues have occurred since last week, but we did have more activity on the streets than we have had since mid-March.”

Murphy said the county announced it may open Bayfront Park, 316 N. Bay Blvd., May 13. The park had remained closed when other county-run beaches opened May 4.

“The Manatee County mandated two-hour parking limit approach concerns me, as it would seem to create a churn of beachgoers as well as create even more traffic on our narrow streets,” Murphy said. “I have asked the county administrator to take that into consideration when they open that park.”

Meanwhile, Speciale said officers were called May 5 to break up a Cinco de Mayo party at the Wicked Cantina, 101 Seventh St. N.

“It was one of those things that got a little out of hand, but they took care of it as soon as we called them on it,” he said, adding businesses appeared to be complying with the order for 25% capacity.

Tokajer said Holmes Beach officers had reached out to some businesses on the governor’s orders and they seemed willing to comply.

“We are all adults here,” Speciale said. “As long as people behave like adults and do the right thing, everything will be OK. If people are obviously violating the order, they will be educated and possibly cited.”