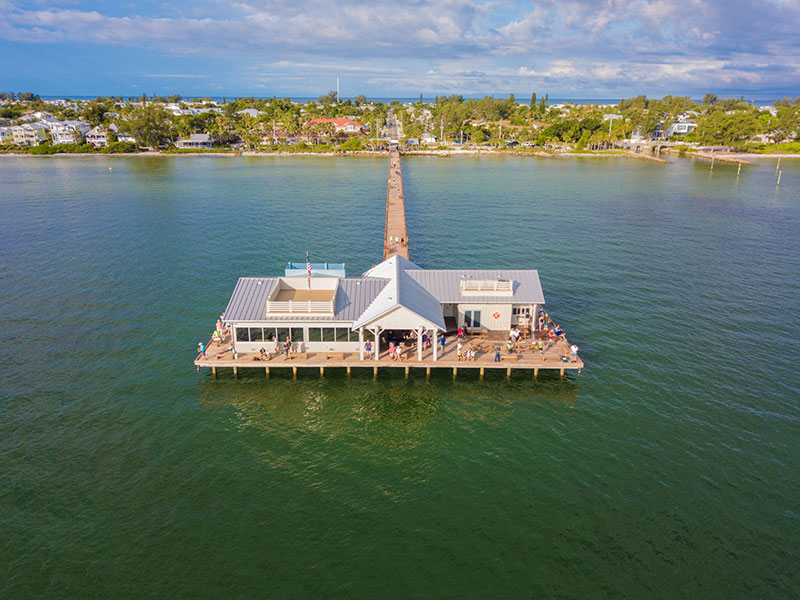 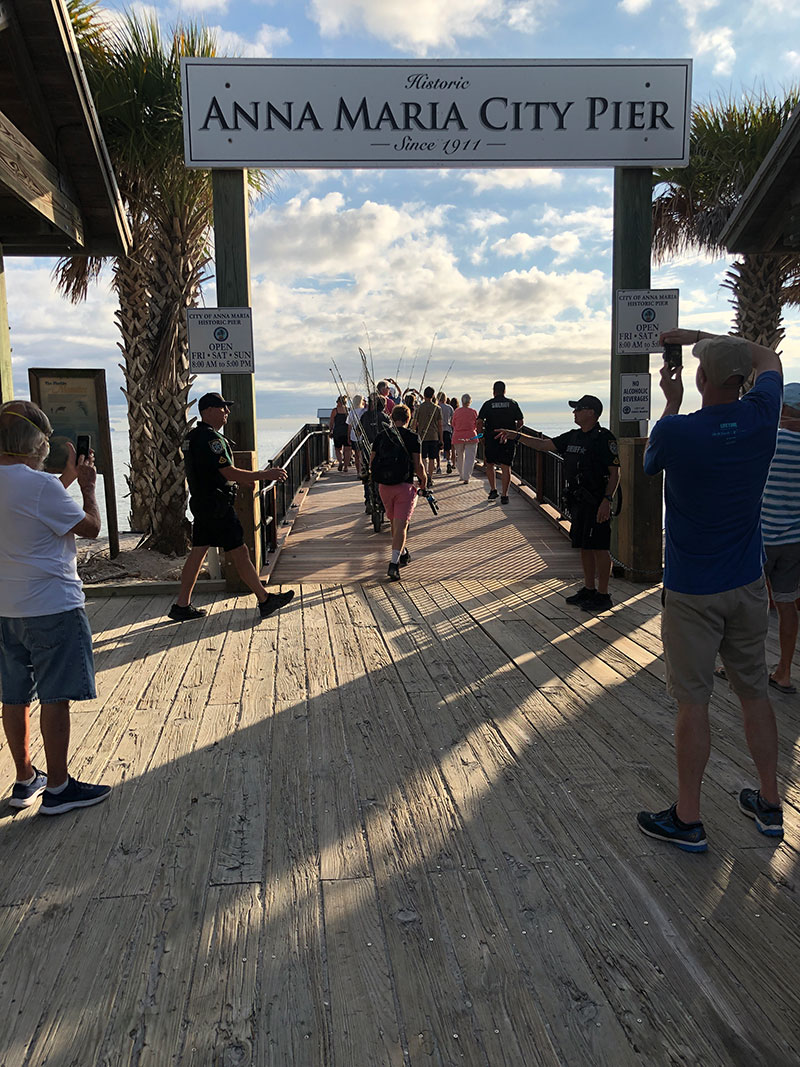 About 50 people who waited landside flood onto the new Anna Maria City Pier June 19, as the gate swung open for the first time in nearly three years at 8 a.m. The city built the new pier to replace the original 1911-built pier, which was demolished by the city in 2018 following a declaration of damages caused by Hurricane Irma in 2017. The total cost is estimated at $6.8 million, according to Mayor Dan Murphy, who declined to provide a breakdown. Islander Photo: Bonner Joy 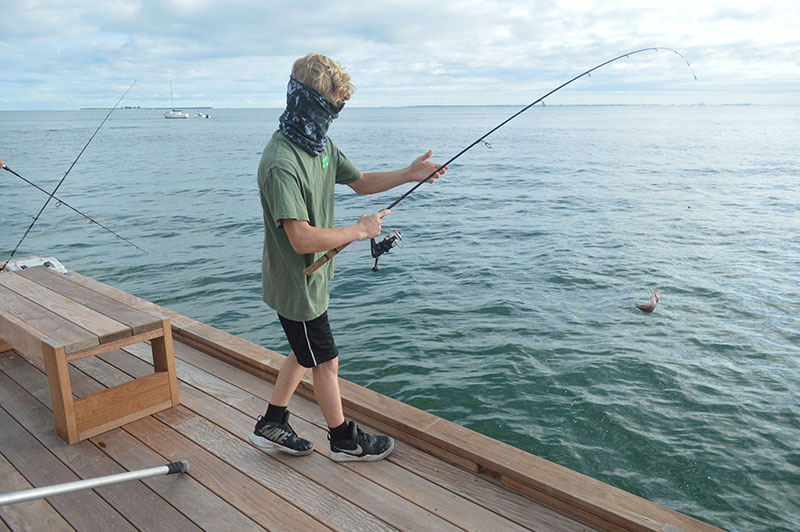 Joseph Dolan, 13, of Palmetto, was among the first to arrive to the Anna Maria City Pier on opening day June 19, and also the first to reel up a fish — a small snapper — at the T-end of the new pier, 101 Bay Blvd. Islander Photo: ChrisAnn Allen 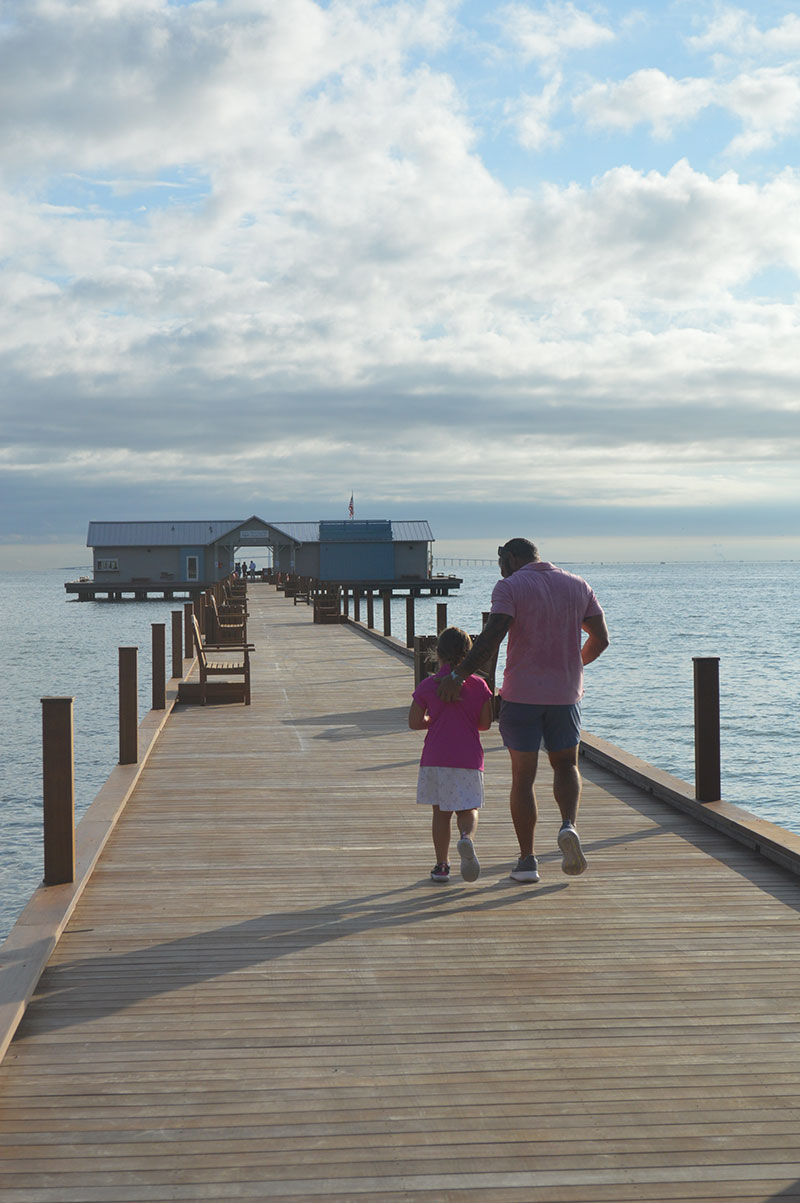 Frank Agnelli, partner in Mason Martin Construction, the contractor for the restaurant and bait shop on the T-end of the new Anna Maria City Pier, and his daughter, Sadie, 6, of Holmes Beach, were the first two people to walk through the gates at the opening, June 19. Agnelli said, “Building this pier was a great privilege.” Islander Photo: ChrisAnn Allen

It took nearly two years for the new pier to welcome people to the boards.

The pier at the east end of Pine Avenue in Anna Maria was built to replace the historic pier, which opened in 1911 but was removed by the city after damage from Hurricane Irma in September 2017.

An initial crowd of about 50 people made its way down the walkway to the T-end June 19, where Mayor Dan Murphy and Commissioners Carol Carter and Amy Tripp were waiting to greet visitors.

Due to concerns over the spread of coronavirus, the city postponed a ribbon-cutting event in lieu of a “soft opening,” but officials plan to hold a celebration honoring those who contributed to the pier, according to Murphy.

“I’m very happy with how it went,” Murphy said of the opening. “It was a really nice crowd with lots of families. And that made me feel good.”

Tripp also said she enjoyed seeing families on the pier.

“So many people said they missed the pier and how happy they were it was open again,” she said. “Seeing all the families with kids was great. I feel like it will really be a community-connector,”

“I loved seeing many residents of the island and Manatee County, who had so looked forward to being able to walk out on the pier,” she said. “For many months they’ve been anticipating this as they’ve been watching things develop.”

Anna Maria resident Skip Roach, his wife Marie and granddaughter Catherine were among the first people on the pier when it opened.

“I’ve been coming out here every day at sunrise,” Roach said. “I was heartbroken when it was damaged. But here we are today. And it is beautiful.”

Florida’s Government-in-the-Sunshine Law limits when two or more officials on the same board can gather for discussions.

On June 19, as members of the public were held back at the gate to the new Anna Maria City Pier, Mayor Dan Murphy and Commissioners Carol Carter and Amy Tripp were observed on the T-end of the pier prior to the 8 a.m. opening.

Murphy and Carter each told The Islander in separate phone calls after the pier opening that they arrived early to set up tables, check the bathrooms and ensure masks were available for the public.

There was no ribbon-cutting, speaker, refreshments or entertainment at the opening.

Tripp said she too arrived before the gates opened and that she and Carter chatted about their families while awaiting the crowd. Carter concurred.

The mayor and commissioners each told The Islander that no city business was discussed.

Per state regulations, the event notice posted on the bulletin board at city hall in advance of June 19, stated, “There may be one or more commissioners, committee members, or board members on the city pier at one time during the opening of the city pier, June 19-21, 2020. There will be no city business conducted at this time.”

The notice was not posted to the city website nor was it provided to The Islander until after the meeting.

And many times, in many Sunshine Law training sessions, all who attended have heard the attorneys and others who conduct the mandatory training, advising officials of elected and appointed boards to avoid the appearance of impropriety.