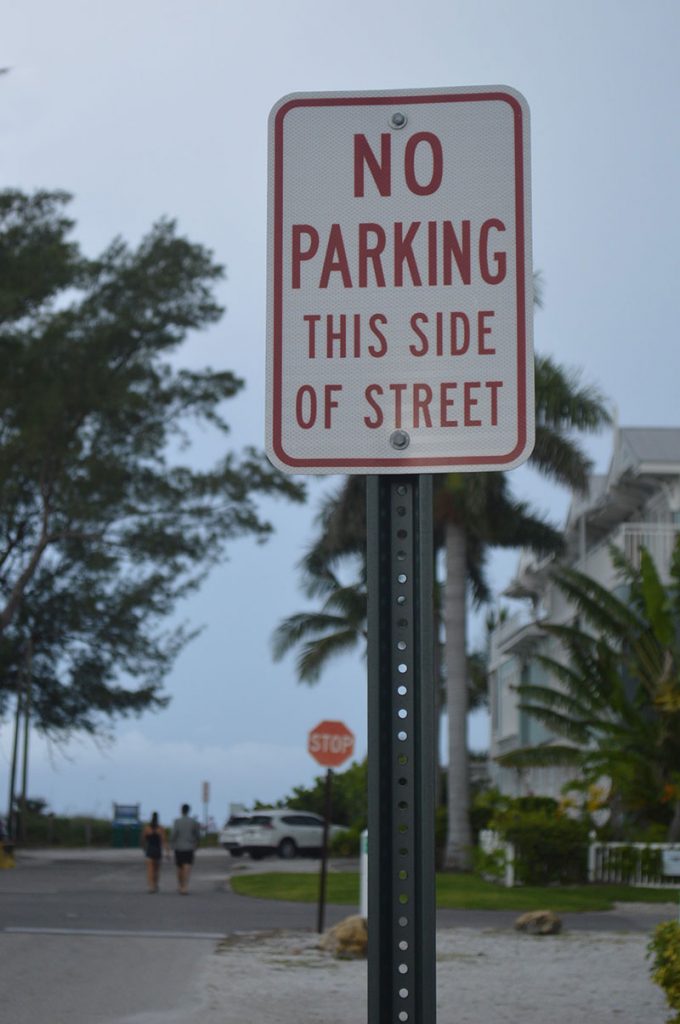 About 1,100 on-street parking spots in Holmes Beach, including parking in the 200 block along 30th Street, were designated no parking by the city after the parking closure imposed during the coronavirus beach closure was lifted. Manatee County now wants to work with the island cities to help find parking solutions on Anna Maria Island. Islander Photo: ChrisAnn Allen

Anna Maria — For as long as most islanders can remember, parking has been difficult.

As one of few places with free beach parking, accessibility has led to increased congestion and trash in neighborhoods where on-street parking is allowed, according to some residents.

Over the years, Anna Maria, Bradenton Beach and Holmes Beach officials have grappled with failed options for paid parking, including meters and garages.

Following a decision in late April by Holmes Beach officials and staff not to reopen about 1,100 parking spaces within a quarter-mile of the beach once the coronavirus beach closure was lifted, Manatee County commissioners agreed: It’s time to speak with island city leaders about parking.

At a June 16 teleconferenced county commission meeting, commissioners reached consensus on County Commissioner Carol Whitmore’s suggestion to bring island city officials into a discussion with the county about possible parking solutions. Whitmore is an island resident who previously served Holmes Beach as its mayor.

The meeting was not set as of press time for The Islander.

In a late April teleconferenced public meeting, Holmes Beach commissioners agreed to Police Chief Bill Tokajer’s plan — a plan requested and reviewed by Mayor Judy Titsworth — to remove the parking spots. The matter was not advertised on the city meeting agenda and no vote was taken.

The city charter includes traffic engineer in the chief’s duties.

Since then, county and state officials have voiced opposition, citing concerns with parking required for federal and state beach renourishment funding and accessibility of public beaches to all taxpayers.

Titsworth countered that since the county advertises the island as a tourist destination, it should help with infrastructure. And Holmes Beach neighborhoods, which have more on-street parking — excluding large parking lots such as at Coquina Beach — than the other two cities combined, should not have to supply the bulk of the parking needs.

As of June 18, the city had 500 allocated spots for beach renourishment, even though it is only required to have 364 parking spots to retain funding, according to Tokajer.

When the new “no parking” signs went up in early June, some island residents, property owners, business owners and off-islanders posted to social media, contacted news outlets, circulated and signed petitions, called elected officials and staged a public protest with concerns that the decision was made both at a vulnerable time and without public input.

As a result, Holmes Beach commissioners planned to discuss a draft ordinance at a June 23 work session for a “parking-by-permit-only zone” that would provide decals to city property owners for parking preference.

Former Commissioner Rick Hurst, who is again running for a seat on the city commission in the November election and has publicly opposed the parking reduction, said June 18 that he supports the commission’s decision to consider the options, but a town hall meeting might have been a better format.

Hurst said there is a “silent majority” of people in Holmes Beach who don’t usually speak up on matters but are concerned that the city is polarized by the recent parking restrictions.

“I think the city officials should step up and say, ‘We made a mistake,’ and we want to hear you. We want to listen,’” Hurst said. “Instead they have already put forth (a draft) ordinance. Is that what everybody wants?”

In the meantime, Tokajer said June 18 he is willing to work with the county.

“We are open to having discussions with the county to try and get them to understand our concerns and, hopefully, provide viable solutions that the city would be willing to participate in,” Tokajer said. “I cannot speak for the city leaders, but I think the only way to come to some type of agreement is through open dialogue.”