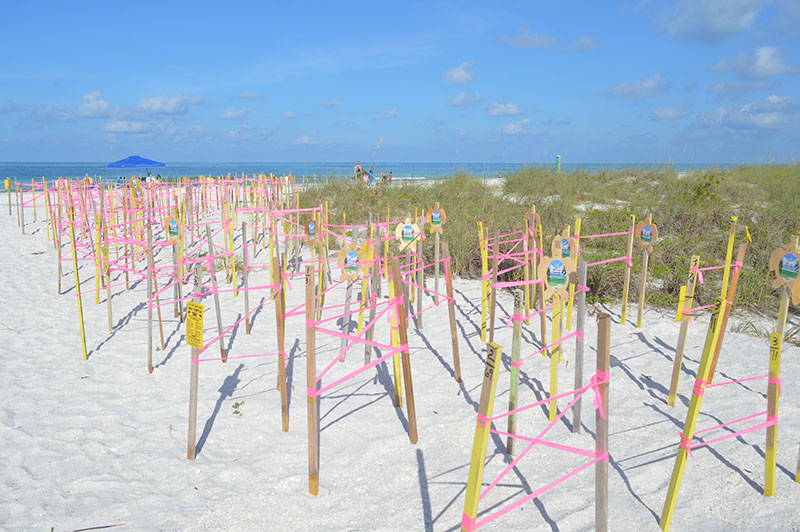 Brightly marked rows of relocated sea turtle nests stretch seaward June 24 on the beach in Anna Maria. The nests were relocated to Anna Maria from Bradenton Beach and Holmes Beach ahead of a renourishment project. Islander Photo: ChrisAnn Allen

“Nesting is down a bit from 15 a day,” Suzi Fox, Anna Maria Island Turtle Watch and Shorebird Monitoring executive director, said June 24. “That gives us a chance to catch our breath.”

As Fox and her league of volunteers take a breath, Manatee County is gearing up a beach renourishment project on Anna Maria Island, working from 78th Street in Holmes Beach to Longboat Pass in Bradenton Beach.

As of June 25, turtle watch volunteers had spotted and relocated 209 nests from the shoreline in Bradenton Beach and Holmes Beach to areas north of the Manatee County beach renourishment project zone, so eggs were not destroyed by equipment or covered by sand pumped in to restore the eroded beaches.

Fox said she has worked closely with the county biologist and project contractor to ensure nesting turtles and hatchlings will not be in harm’s way during the work.

The county planned to begin beach renourishment July 2, weather permitting, and will continue through Oct. 31 — coinciding with the end of sea turtle nesting season.

Since the season began May 1, nests laid on beaches slated for renourishment have been relocated to human-made nests on beaches in Anna Maria, outside the project area.

However, Fox said nests laid in newly renourished sections, after equipment has passed through, will not be relocated.

“It won’t be as many, since things are slowing down, but people could see some nests marked in Holmes Beach and Bradenton Beach,” Fox said.

For each nest in the relocation zone, volunteers collect the eggs, retain them until after sunrise and deposit them in a hole dug in the sand to mimic the shape of a sea turtle nest cavity, following Florida Fish and Wildlife Conservation Commission and U.S. Army Corps of Engineers regulations.

Nests laid outside the relocation zone in Anna Maria are not marked or reported, but turtle watch tracks the dates laid and location.

Fox said, any day now, hatchlings from the first nests of the season will start emerging from the nests and heading to the Gulf of Mexico.

Each nest contains about 100 eggs, which all will hatch at once, after about 45-70 days of incubation.

After that, males never leave the water and females only come ashore to nest.

Turtle watch volunteers excavate nests 72 hours after hatching to count hatched, unhatched and partially developed eggs and collect other data, which is shared with federal, state and county agencies.

Previously, AMITW invited the public to attend excavations. This year, with concerns over the spread of the coronavirus, volunteers will work without a gallery.

“We want to do what is safest for everyone,” Fox said. “We can protect the turtles while protecting ourselves.”

For more information about turtle watch, people can visit the AMITW website at islandturtlewatch.com or contact Fox at 941-778-5638 or suzilfox@gmail.com.

To find out more about beach renourishment, including anticipated scheduling, visit mymanatee.org.