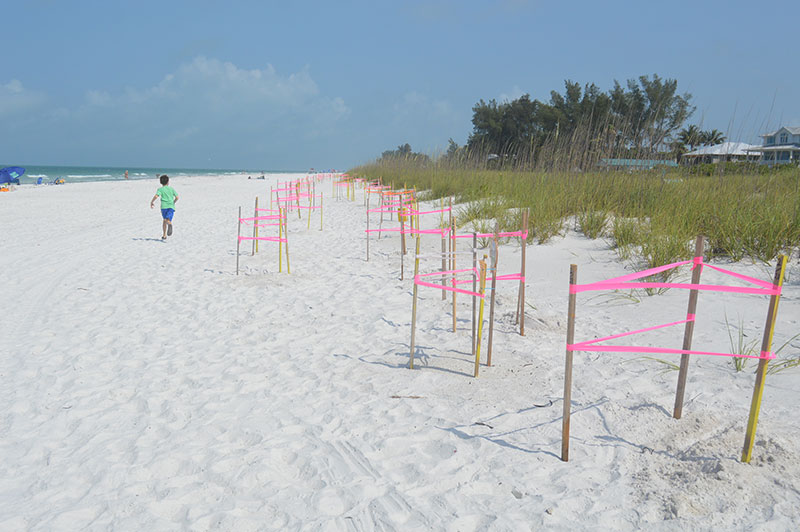 Human-made sea turtle nests, dug by AMITW volunteers and marked with stakes and pink ribbons, line the dunes along the beach north of Peppertree Lane in Anna Maria. The eggs were relocated from clutches laid in Holmes Beach and Bradenton Beach due to an anticipated beach renourishment project. Islander Photo: ChrisAnn Allen

As temperatures start to climb, sea turtles get busy.

“They are reptiles, so everything is temperature driven,” Suzi Fox, Anna Maria Island Turtle Watch and Shorebird executive director, said May 28.

AMITW reported 60 loggerhead nests as of May 28 — up from 34 nests a week prior — on beaches within the Manatee County beach renourishment project zone, which extends from 78th Street in Holmes Beach south to Longboat Pass.

The locations of nests on Anna Maria beaches north of the project are recorded, but AMITW volunteers are not marking those nests and will not track hatchlings, as they will with the relocated nests.

Fox said she has been approached by people walking north-end beaches who noticed tractor-like tracks leading to nests and asked why they were not marked.

“People think we missed something,” Fox said. “I just have to explain it is being documented in a different way.”

AMITW performs duties under a contract with Manatee County to document nesting and hatching data for the state related to beach renourishment — and the nonprofit is compensated for the work.

And since nesting season picked up, Fox and her AMITW volunteers have had their hands full moving nests out of the renourishment area and into safer areas of the beach.

The organization transitioned this year from an army of volunteers walking the beach each morning, to a core group that canvases the beach by ATV and rapidly relocates the eggs from nests found in the renourishment area to nests dug by volunteers along the dunes north of Peppertree Lane in Anna Maria.

“It couldn’t work any better,” Fox said of the process. She said she plans to continue conducting nesting surveys by ATV for future seasons, as it has worked well so far this year.

She said traveling the beach by ATV limits interactions with the public, but with concerns over the spread of the novel coronavirus, she is encouraging distance.

“Most people we see are practicing social distancing just fine,” Fox said, adding she tells people to visit the AMITW website at islandturtlewatch.com and she can be reached by phone at 941-778-5638 or via email at suzilfox@gmail.com.

However, she is concerned with people keeping a safe distance from shorebirds, which are arriving to nest among the dunes on island beaches.

Fox said black skimmers congregated in several spots but had not yet nested. She cautioned that people should keep their distance as any human interactions could prove disruptive.

Additionally, she said five adult sea turtles disoriented, traveling north or south along the beach instead of nesting.

People, objects and bright lights can distract the female sea turtles, which only leave the water to nest.

Fox said, in one instance, volunteers found where a sea turtle had dug a deep egg cavity, but abandoned it for a location higher in the dunes, likely because someone was walking nearby.

“There are a lot of people on the beach right now,” Fox said. “And we know they are excited. But they need to understand that wildlife needs distance, too.”

Beachgoers and boaters can report sick, injured, entangled or dead sea turtles and birds or other wildlife to the FWC Wildlife Alert Hotline at 1-888-404-3922, #FWC or *FWC on a cellphone or text tip@myfwc.com.

Holmes Beach residents want more seating to watch as the sun sets on the beach.

But Anna Maria Island Turtle Watch and Shorebird Monitoring, as well as the police chief, have concerns about benches that could be placed too close to the shoreline, which could interfere with nesting sea turtles.

Commissioners supported the request, but Police Chief Bill Tokajer said he is concerned because, in the past, beachfront benches were found to be safety hazards for nesting sea turtles and their hatchlings and had to be moved landward or moved off the beach.

Tokajer told The Islander May 28 that he was meeting with Suzi Fox, AMITW executive director, and they are working up a plan for benches.