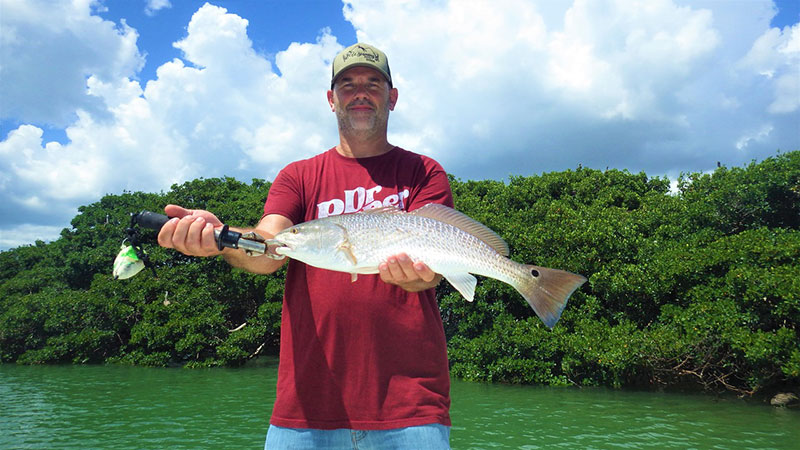 Chad Greer, visiting Anna Maria Island from St. Louis, fished inshore using shiners as bait. He hooked this catch, photo and release redfish and more, and some snook, too, all on a guided trip with Capt. Warren Girle.

In Tampa Bay, structure is prime for a variety of fish. Bottom fishing with live shiners or pinfish is resulting in mangrove snapper and gag grouper. But free-lining live shiners over structure also can entice the snappers along with some of the more ravenous species — Spanish mackerel and jack crevalle. which typically beat the snapper to the hook.

On the flats of Tampa Bay, catch-and-release snook fishing is still a good bet. Just make sure you have good tidal flow if you want to heighten the experience. The same applies for catch-and-release spotted seatrout. Good numbers of these popular buck-toothed fish are present in the deeper grass areas.

Those willing to make the voyage offshore were being rewarded with limits of American red snapper up to the season’s end July 25. Other snappers, such as mangrove and yellowtail are being caught, too, and fishing wrecks offshore is leading to some excellent action on permit and sharks.

Lastly, hard-bottom areas are a good place to look for some keeper gag and red grouper.

On my Southernaire charters, I’m collecting limits of mangrove snapper for the cooler. Fishing structure in Tampa Bay is providing good numbers of these guys. Mixed in are macks, jack crevalle, ladyfish and juvenile grouper.

Moving to the flats, the catch-and-release snook action has tapered off slightly but is still productive. Fish ranging 20-30 inches are the norm.

Catch-and-release spotted seatrout action is productive over the deep grass flats. Free-lining
live shiners as bait is doing the job. Spanish mackerel and ladyfish also are present, as well as mangrove snapper.

Capt. Warren Girle is targeting mangrove snapper over reefs and wrecks in Tampa Bay and the Gulf of Mexico. Baiting the hook with small live shiners is leading Girle and his clients to limits of these popular inshore snapper. Mixed in with the snapper are mackerel and juvenile grouper.

On the grass flats, Girle is finding catch-and-release spotted seatrout in good numbers for the sport anglers. Depths of 4-8 feet are producing the best action. Ladyfish and jack crevalle also are lurking on these deep flats, readily taking baits as they come across them.

Lastly, catch-and-release snook fishing along mangrove shorelines is giving Girle’s clients the thrill of hooking into a linesider.

Capt. Aaron Lowman is concentrating his efforts over the structure available around Tampa Bay. These areas are host to a variety of species, including mangrove snapper, Spanish mackerel and gag grouper. Chumming live bait is getting the fish fired up, which makes for some great light-tackle fishing.

Also in Tampa Bay, there is good catch-and-release action over the flats for snook and spotted seatrout. For the best results, Lowman suggests working a strong tidal flow.

Lastly, fishing some of the artificial reefs in the Gulf is producing some good action. Permit, bonita, goliath grouper and sharks are cruising for your bait.

Capt. Jason Stock says despite the weather being all over the boards, he’s still finding a good tarpon bite. Evening outgoing tides are producing tarpon action — if you know where to look.

Fishing around some of the nearshore reefs is yielding some catch-and-release over-slot snook, as well as goliath grouper. And both are crowd-pleasers, according to Stock.

Moving out to some of the offshore wrecks is resulting in some sizzling permit action. Lastly, American red snapper were the go-to while offshore before season wrapped up July 25.

Jim Malfese at the Rod & Reel Pier says catch-and-release redfish are being hooked frequently by the pier anglers using live shrimp as bait. Catches are 15-30 inches with most on the smaller side.

Mangrove snapper are finding their way to the hook for a live shrimp. Limits of these fish are going into the coolers of patient anglers with a ruler. Most are 10 to 12 inches.

Lastly, jack crevalle and ladyfish are predominant when the bait schools are present. Silver spoons or crappie jigs are pretty much guaranteed to attract a bite.

Capt. David White was in pursuit of American red snapper right up to the July 25 cutoff. Limits of these aggressive fish are occurring daily. Mangrove and yellowtail are being added to the snapper aggregates while on the charters with White. Targeting grouper is yet another offshore winner. Gag and red grouper are responding to both live and frozen baits.