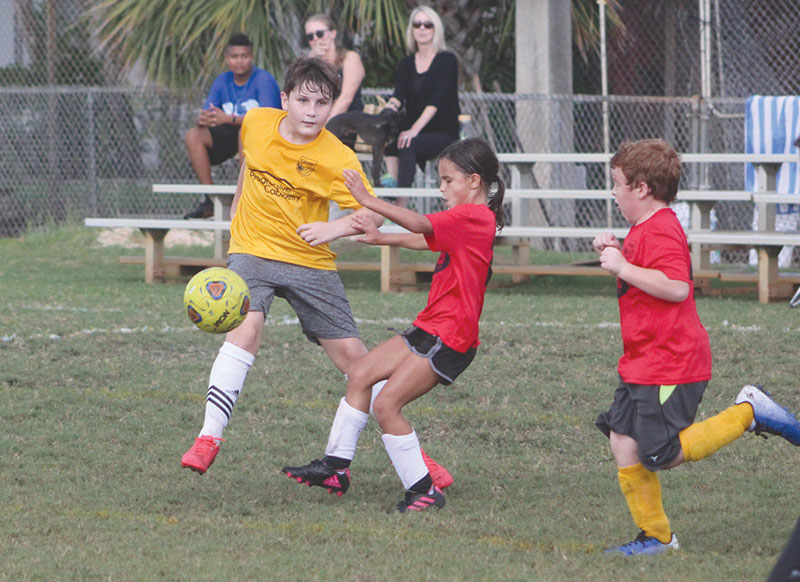 The last games of the regular season were played and playoff seedings were set Oct. 13. Progressive Cabinetry nailed down top seed in the 8-10 division, while Beach Bums finished second. Moss Builders held onto third seed, while HSH Designs takes No. 4.

Moss Builders takes on Beach Bums followed by HSH Designs taking on top-seeded Progressive Cabinetry in the semifinals Oct. 20, after press time for The Islander. The winners will meet in the championship match at 6:45 p.m. Tuesday, Oct. 27, following the consolation game between Miz & Hiz Biz and the loser of the Oct. 20 Moss vs. Bums matchup.

The 11-14 division has Tidy MD riding the top seed, taking on Slim’s Place after the 8-10 division wraps up Oct. 20, followed by No. 2 Ugly Grouper taking on No. 3 Gulf Drive Cafe in the second semifinal match. The winners will meet in the championship match Oct. 27.

Meanwhile, the final games of the regular season kicked off in the 8-10 division with Progressive Cabinetry cruising to a 5-1 victory over Beach Bums behind two goals and one assist from Jack McCarthy and a goal and an assist from Jesse Zaccagnino. Cale Rudacille chipped in with a goal while also making four saves between the pipes while sister Cammie Rudacille made it a family affair with a goal of her own.

Hayden Eurice scored the lone goal for Beach Bums, which also received four saves from Cyrus Ryan in the loss.

The second 8-10 division match saw HSH Designs edge Moss Builders 3-1 behind a pair of goals from Sterling Holiday and one goal from Paxton Lee. Brady Thompson helped preserve the victory with six saves in goal.

Nixon Conner notched the lone goal for Moss Builders which also received five saves from Liam Nunez in the loss.

Madison and Ferrari and Chad Nunez combined on three saves to lead Slim’s Place in the loss.

The last match of the night saw Tidy MD slip past Gulf Drive Cafe by a 1-0 score behind Jayden Sparks’ lone tally. Sparks also made two saves between the pipes while Emma Raulerson made four saves in goal to help preserve the victory.

After four weeks of action in the adult soccer league at the Center of Anna Maria Island, Slim’s Place is the only team without a loss. They are alone in first place with a 3-0-1 record, just ahead of Sato Real Estate at 3-1. Signature Granite holds down third place at 2-0-2, just ahead of Blalock Walters at 2-1-1. Ugly Grouper sits in fifth at 2-2, while Solid Rock Construction and Progressive Cabinetry share 1-3 records and sixth place. Skinny’s Tavern is alone at the bottom.

Action Oct. 14 kicked off with Ugly Grouper outscoring Skinny’s 9-5 behind four goals from Chris Scott and three goals from Nate Welch. Greg Ross added a goal for Ugly Grouper, which also received an assist from Eliza Faillace and nine saves from Robb Marshall in the victory.

Kevin Bell scored a hat trick to lead Skinny’s, which also received a goal each from Chase Diaz and Katie Christenson and 10 saves from Hayden Brewer in the loss.

Sato Real Estate cruised to a 7-3 victory over Solid Rock Construction behind four goals from Raul Loria and two goals and an assist from Rico Beissert. Jessica Williams added a goal and an assist in the loss, while John Hagerty made three saves.

Blalock Walters crushed Progressive Cabinetry 9-1 with hat tricks from Tyler Brewer and Murap Akay. Greg DeMeuse, Damir Glavan and Matt Staggs each scored a goal to round out the Blalock Walters scoring.

Chris Circharo scored the lone goal for Progressive in the loss on an assist from Daniel Adan.

The final matchup of the night produced some competitive play and a 3-3 tie for Signature Granite and Slim’s. Brent Moss, Andy Thompson and Nick Bouchard each scored goals to lead Slim’s, which also received an assist from Clancy Vaughn and six saves from Ryan Moss.

Aside from winless Gulfview Windows and Doors, the standings in the adult flag football league at the Center of Anna Maria Island are tight. Solid Rock Construction and Sandbar are both 4-1 with Sandbar on top by virtue of a victory over Solid Rock Construction. Slim’s is right on the Gulfview heels with a 3-2 record, Ugly Grouper follows at 2-2, while Moss Builders, Beach Bums and Progressive Cabinetry follow with 2-3 records.

Action this past week kicked off with Sandbar easing past Solid Rock 27-22. Other games saw Beach Bums crush Progressive 41-14 and Slim’s Place cruise past Gulfview Windows and Doors on a 20-6 score.

The game of the night, however, had to be the matchup that tipped for Ugly Grouper 31-30 against Moss Builders behind Ray Gardner’s two touchdown passes and a receiving touchdown for the Grouper. Ben Sato also had a big game, throwing for two touchdowns and catching a pair. Jay Hoffmeister, had a pick six and Chad Woods’ extra point completed the scoring for Ugly Grouper.

Moss Builders was led by Ryan Moss, who threw four TD passes to four receivers. Jon Moss, Evelyn Long, James Roadman and Cole Carter each had a touchdown catch with Carter chipping in a pair of 2-point conversions in the loss.

Golf is ramping up at the Key Royale Club in Holmes Beach, where a growing roster of members returning from their winter digs celebrated fall Oct. 10 with an Oktoberfest Scramble — and 52 golfers on the links.

Playing a Miami scramble — a regular scramble where the team plays its second shot from the spot of its best drive. The difference in the Miami scramble comes when the best drive hitter is eliminated from his or her second shot. The team of Anne Klein, Tom Nelson, Dan Haversten and Andi Saia combined on a 24.5 to win clubhouse bragging rights for the day. Eric Lawson won the men’s long-drive contest, while Debi Wohlers captured the prize among the women. Ellen Boin took the closes-to-the-pin for the women and Steve Vasbinder was the men’s winner.

Following play on the course, more than 60 members enjoyed Oktoberfest food and libations at the clubhouse.

Regular golf action teed off Oct. 12 with the men’s nine-hole modified Stableford-system match that saw Terry Tarras card a plus-5 to edge Larry Pippel by a point for the day’s honors.

Horseshoe action at the city of Anna Maria’s horseshoe pits was dominated by Tim Sofran. During the Oct. 14 games, he found himself matched up against Jerry Disbrow and Steve Doyle in the finals after both teams forged 3-0 records in pool play. Sofran cruised to a 22-0 victory to earn the day’s championship.

And he was again the winner at the conclusion of play during the Oct. 17 games, posting the lone 3-0 record in pool play.