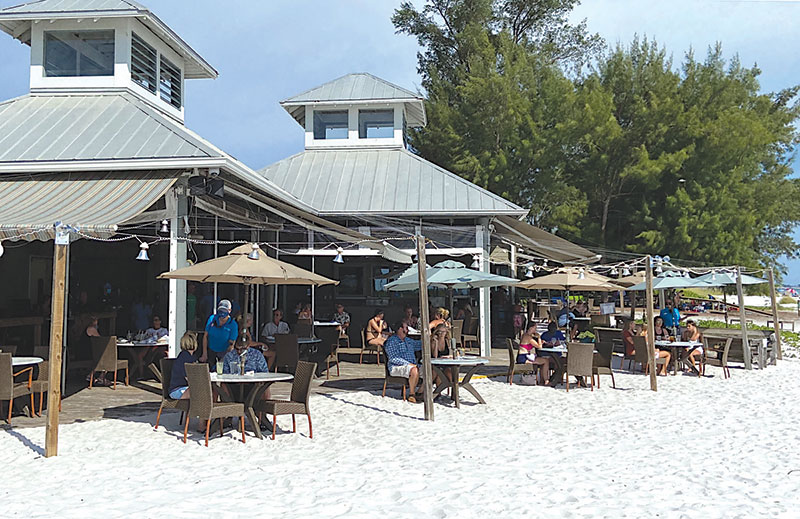 On the outdoor deck at the Sandbar Restaurant on the Gulffront in Anna Maria Aug. 7, guests include people in swimwear. Islander Photo: Ryan Paice

But he did so Aug. 3, quashing an ordinance that would have required men to cover their breasts — essentially requiring shirts for all patrons — at establishments that sell alcoholic beverages.

The city commission voted 4-1 to approve an ordinance July 30 that removed “female” from the city code that restricted women from exposing their breasts in establishments with alcohol service. The change was recommended by the city’s planning and zoning board to make the code gender-neutral.

Commissioner Jonathan Crane voted “no,” voicing concerns with fining or arresting men for showing their breasts in a beach community where they can walk shirtless.

The amended ordinance would have required any person to cover their breast in businesses selling alcohol for on-premises consumption, including outdoor dining areas that overlook the beach. It did not establish an age-related exemption to the requirement.

Murphy explained his veto in an Aug. 3 email:

Murphy asked the commissioners to “reconsider and modify this ordinance in the very near future.”

The commission could override Murphy’s veto with a supermajority — at least four votes. The next opportunity to discuss the ordinance will be at the commission meeting at 2 p.m. Thursday, Aug. 13, at city hall, 10005 Gulf Drive N.

Crane, who opposed the ordinance, said Aug. 3 that the policy change was “problematic,” but could be revisited.

Commissioner Carol Carter declined to comment Aug. 7 and Commissioner Amy Tripp did not respond to an Aug. 7 phone call from The Islander.

Commissioners Mark Short and Joe Muscatello did not respond to Aug. 7 emails from The Islander.

“Where we live is a very casual place,” Smargisso said. “To ask them to put a shirt on just to get a beer or a sandwich is kind of crazy.”

“I don’t think it’s necessary to go that far,” he said. “I didn’t know we had a problem in the first place.”

Smargisso agreed, sometimes people walk to and from the beach and stop by establishments in beach attire and they often bring kids, too.

However, Smargisso said he’d welcome the ordinance change if it applied to indoor spaces, adding that he personally would prefer to dine in a restaurant without shirtless people.

Planning and zoning board member Barbara Zdravecky, who proposed the changes to make city code more gender-neutral, said Aug. 8 the ordinance could be amended to establish an age-related exemption and specify that the breast-covering requirement only applies indoors.