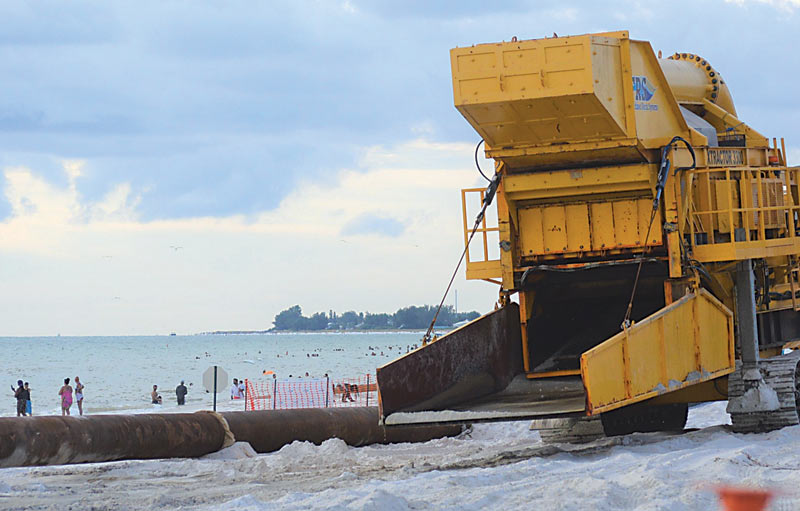 People line the shore of the Gulf of Mexico Aug. 15 near 34th Street in Holmes Beach, north of the beach renourishment project, which is moving south. An extractor that sifts rocks and shell from the sand that is pumped up from the offshore barge is idle. Islander Photos: ChrisAnn Allen 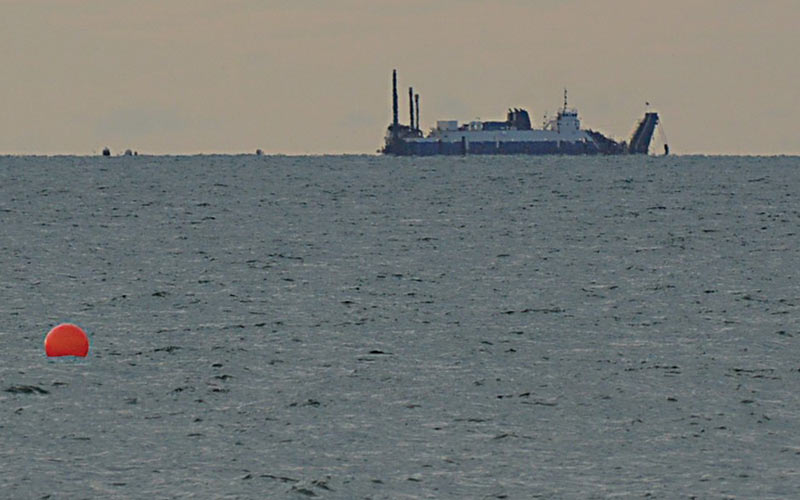 A second barge, added the week of Aug. 10, is a booster for the barge that is dredging sand farther north, providing extra force to pump sand through longer pipes to the beaches in the 3400 block of Gulf Drive, south of the project startup at 77th Street in Holmes Beach.

The sugar-white sand of Anna Maria Island has been the pride of residents.

“As I hope many are witnessing, we have the best quality sand being delivered to the beach that we have experienced in the 30 years we’ve been doing this program,” Charlie Hunsicker, the Manatee County parks and natural resources director, said Aug. 13 of a $17.3 million project to restore eroded beaches.

The project, which started July 8 at 78th Street in Holmes Beach, has traveled south with workers going 24/7 at a speed of about 300 feet every 24 hours.

As of Aug. 13, renourishment was completed through the area that includes the Manatee Public Beach at 4000 Gulf Drive in Holmes Beach, and was on hold while contractors prepared a second barge with a “booster” pump, which will provide extra force through the longer runs of pipe to the beaches south of the public beach.

Previously, Hunsicker said the middle of the island, south of the public beach, where the shore is narrowest, could take longer.

Hunsicker said Aug. 13 that the project would resume about four blocks south of the public beach after the second barge arrives, likely by Aug. 17.

He also said the project is relocating south on the beach so excessive pipeline doesn’t stretch the full length of the shore for the nine-month duration of the project.

The first phase, the Anna Maria Island Shore Protection Project, and will continue to about Fifth Street South in Bradenton Beach.

On the heels of phase 1, the second phase, the Coquina Beach Renourishment Project, will start at Fifth Street South in Bradenton Beach and continue south to Longboat Pass.

The project schedule listed on the county website shows beach fill pumping onto the shore through Oct. 31, with demobilization ending Nov. 15.