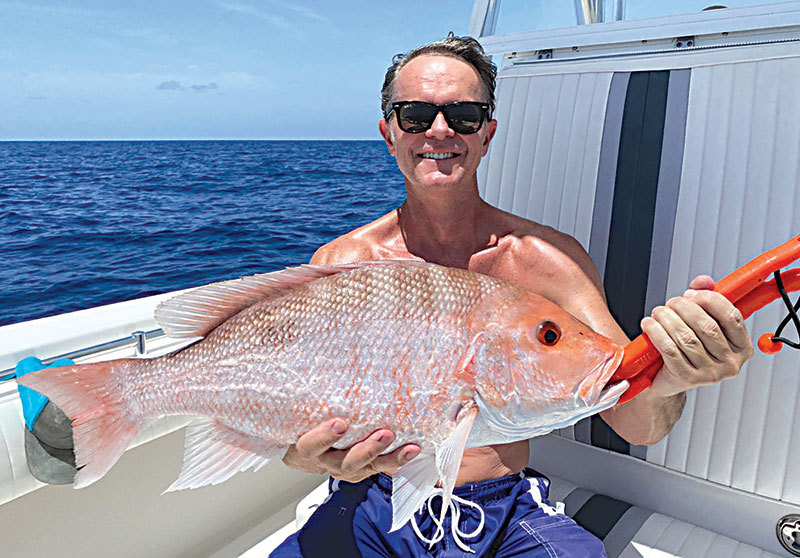 Jack DiPasqua of Bradenton shows off an American red snapper he caught July 29 — the final day of season for the American reds. He found success using a live pinfish for bait in 130 feet of water in the Gulf of Mexico with Capt. David White of Anna Maria Charters.

As the summer heat persists, fishing around Anna Maria Island requires planning your course for a successful day on the water.

This is especially true when fishing the shallow inshore waters of Tampa Bay.

Targeting catch-and-release snook and redfish is best in the morning hours, just before through just after sunrise. The shallow waters on the flats heat up quickly, leaving the fish lazy or unmotivated to bite.

So fishing in the early morning ensures slightly lower water temps and the cooler water results in active fish on the feed.

Another tactic is to fish deeper water. You may not be targeting snook and reds, but other species — mangrove snapper, mackerel and jacks — will keep you reeling.

The cooler, deeper waters are less intrusive on the fish, leaving them more apt to bite.

And there’s always the offshore bite. Traveling out into the Gulf of Mexico is yielding good action now on a variety of species, including permit, snapper and grouper.

On my Southernaire charters, I’m following a pattern determined by the heat.

As the sun gets higher, I’m changing tactics and rigging for deeper water and snapper and mackerel. Both species are cooperating — most days — as long as the tide is moving.

Lastly, fishing deep grass for catch-and-release spotted seatrout is producing action for my anglers. The trout are found mixed in with other species, including ladyfish and jack crevalle, all ready to take a bait.

Capt. Warren Girle is working the inshore waters of Tampa Bay around structure, where a variety of species, including mangrove snapper, juvenile grouper and Spanish mackerel are waiting for a meal. For the snapper and grouper, fishing baits on the bottom works well. For the macks, fishing baits near the surface over the structure produces the best action and Girle’s clients also are finding jack crevalle and ladyfish on the hook.

Moving to the grass flats, Girle is putting clients on plenty of catch-and-release snook and trout action, with both responding to live shiners as bait.

Capt. Aaron Lowman is running clients to the inshore waters of Terra Ceia and Tampa Bay for catch-and-release snook fishing, where live shiners are putting his clients on some excellent action. Swift moving tides combined with mangrove shorelines where oyster bars exist present a perfect recipe for a hook up with the popular backwater fish. While targeting the snook, catch-and-release redfish are sporadically taking a hook.

Moving away from the mangrove shoreline to deeper grass flats is producing frequent action on catch-and-release spotted seatrout, as well as ladyfish, jack crevalle and a few mackerel.

Additionally, running into the Gulf of Mexico is good for a variety of hookups, including mangrove snapper, gag grouper, permit, bonito, cobia and blacktip sharks.

Capt. David White was working charters offshore in pursuit of American red snapper right up to the cutoff July 25. The most aggressive of the snapper species was living up to its reputation, ravaging bait as it drops to the depths. In 100-plus feet of water, White found limits of the snapper. Both live bait and frozen baits attract the bite. While offshore, White is putting his clients on mangrove and yellowtail snappers, too.

Moving inshore, White is enjoying catch-and-release snook action, where, during swift moving tides, his clients are hooking into as many linesiders as they can handle.

Jim Malfese at the Rod & Reel Pier says fishers there are having success with mangrove snapper. Casting live shrimp under the pier results in near limits of the tasty little fish. Most are 10-12 inches. Pier fishers using shrimp as bait also are hooking up with catch-and-release redfish and a few catch-and-release snook. Casting lures — jigs and spoons away from the pier — is yielding lady fish and jack crevalle.

Capt. Jason Stock is finding plenty of offshore action for his clients in the Gulf of Mexico. Targeting permit over wrecks is outstanding, with catches in the 15-pound range.

While fishing around the wrecks, Stock is finding large sharks, which adds excitement to the adventure and wears out anglers. Bull sharks and blacktips can put up quite a fight.

Moving out deeper — to depths exceeding 100 feet — Stock finished out the American red snapper season with success, putting limits of these large snappers into his clients’ coolers.