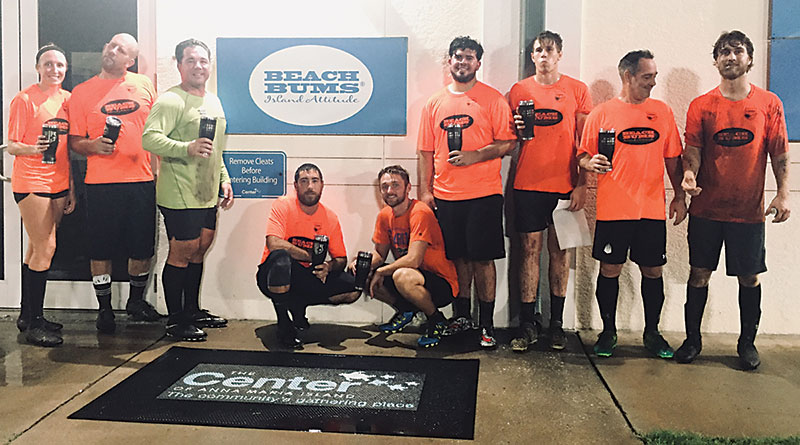 The championship game for the summer adult soccer league at the Center of Anna Maria Island was finally played Sept. 17.

The match came down to Beach Bums and Sato Real Estate but the original date for the championship, Sept. 10, was interrupted by a power outage about halfway through the night match.

It was replayed and the 8-5 victory went to Beach Bums as they jumped out to a 7-1 first-half lead, which then saw Sato Real Estate come out strong in the second half to pull to within 7-5, but Beach Bums tacked on a late goal to put the game away.

Connor Haughey paced Beach Bums with two goals and two assists, while Amy Ivin and Yuri Pereira both notched two goals. Kevin Roman and Andrew Sullivan chipped in with a goal each and Jason Sato posted seven saves in the victory.

Connor Bystrom scored two goals and Sarah Liggins and Josh Sato both added a goal and an assist. Hakan Toka completed the scoring for Sato with a goal and Steve Oelfke made seven saves in the loss.

The standings in the youth soccer league are predictably tight after two weeks of action, especially in the five-team 8-10 division.

Beach Bums is undefeated, but stand a point out of first place at 1-0-1, as Moss Builders leads at 1-0. HSH Designs is alone in third with a 1-1 record followed by 0-0-1 Progressive Cabinetry, which holds fourth place followed by Miz & Hiz Biz at 0-2.

Action kicked off Sept. 15 with Moss Builders and Progressive Cabinetry battling to a 3-3 tie in the 8-10 division. Dylan Sato paced Moss Builders with a pair of goals, while Silas Dewitt added a goal and Xane Flores made five saves in the tie.

Jack McCarthy scored a hat trick to lead Progressive, which also received six saves from Jack Zaccagnino in the tie.

Miz & Hiz Biz were led in the loss by three saves from goalie Liam Nunez.

The 11-14 division kicked off with Gulf Drive Cafe slipping by Slim’s Place 2-0 behind a goal each from Carter Eurice and Evan Talucci. Talucci also did duty in goal, combining with Aidan Gannon on eight saves to help preserve the victory.

Asa Brisson and Mya Ferrari combined on five saves to lead Slim’s Place in the loss.

The last match of the night saw Tidy MD outscore Ugly Grouper 5-3 behind two goals each from Caden Quimby and Frankie Coleman. Victor Albrecht had a busy night, scoring a goal and assisting on two others, while also making five saves between the pipes.

Ronan Robertson scored two goals and had an assist to lead Ugly Grouper, which also received a goal in the loss from Audrey Guess and nine saves from Benjamin Young.

Persistent rains closed the golf course Sept. 14-15 at the Key Royale Club in Holmes Beach, leaving members to talk over golf in the clubhouse.

The course dried out enough Sept. 17 for the men to play a nine-hole scramble that saw the team of Jon Holcomb, Bill MacMillan, Bill Shuman and Quentin Talbert combine on a 6-under-par 26 to take first place for the day. Second went to the team of Bill Dimenna, Clint Hurdle, Art McMillan and Dave Richardson at 4-under-par 28.

Tim Sofran fell behind early to Norm Good and Bob Heiger, but rallied for a 23-16 victory to earn the day’s bragging rights.

Sofran again found himself in the winner’s circle Sept. 19, this time teaming up with Gary Howcroft to forge the lone 3-0 record in pool play.

Play gets underway at 9 a.m. Wednesdays and Saturdays at the Anna Maria pits with warmups starting at 8:45 a.m. followed by random team selection.