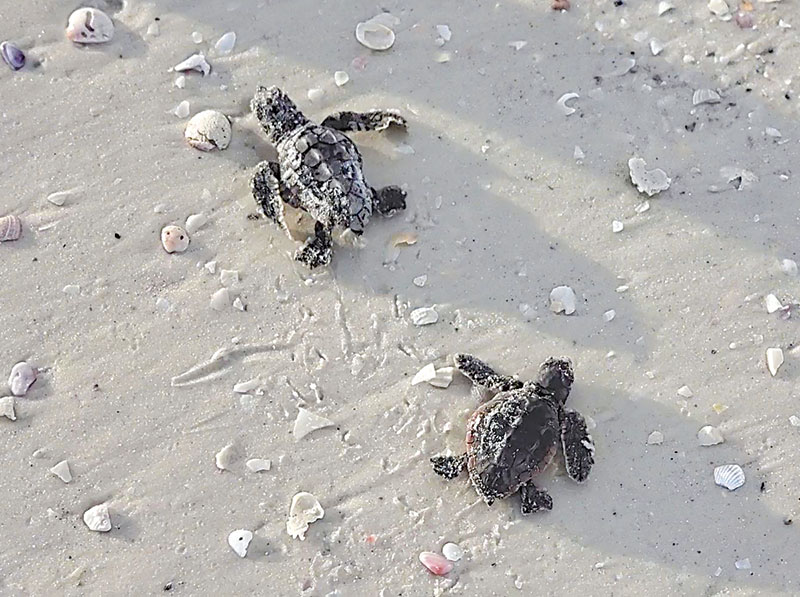 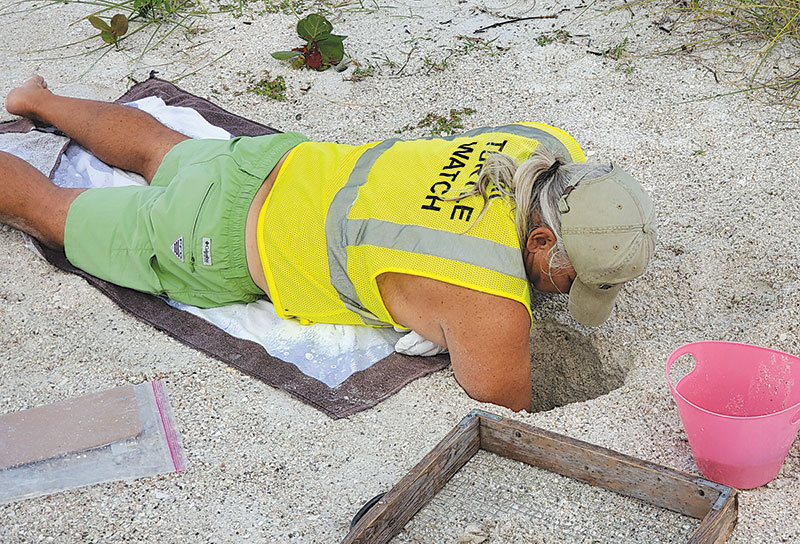 Sea turtle nesting season and the hatches that follow are winding down.

So Anna Maria Island Turtle Watch and Shorebird monitoring is planning for 2021.

As of Sept. 8, 52 of 349 nests laid this season remained to hatch in a “nursery” on the beach near White Avenue and Peppertree Lane, near the Anna Maria/Holmes Beach boundary.

Nests laid in Bradenton Beach and Holmes Beach since season began with the first nest in late April have been relocated to Anna Maria due to the ongoing $17 million beach renourishment project. The sand replenishment started near 77th Street in Holmes Beach July 8 and will continue south to Longboat Pass through the end of October, paralleling sea turtle season.

In August, a private security light atop a tall pole in Holmes Beach near the nursery caused hatchlings from 65 nests to disorient and travel away from the Gulf of Mexico.

Artificial light visible at a sea turtle’s eye level can draw them away from the Gulf of Mexico, increasing the chances of death by predation, dehydration or exhaustion.

The city contacted the property owner and worked with Florida Power and Light to fix the problem, and the light was turned off.

However, Suzi Fox, AMITW executive director, said Sept. 8, since turtle watch started keeping records in 1992 that is the highest number of nests to disorient. In 2019, 59 nests had disorientations and there were 50 in 2018.

Fox must submit reports for each nest — hours of paperwork — to be shared with the Florida Fish and Wildlife Conservation Commission and Manatee County.

She also said the U.S. Army Corp of Engineers, a major funding source for the renourishment project, was concerned about the lighting issue.

The Corps and county must ensure wildlife is not disrupted by the renourishment or by changes to the environment caused by the project.

And, Fox added, that doesn’t account for the loss to the sea turtle population.

Fox plans to address lighting before a new season starts May 1, 2021, when nests will remain wherever the female turtles deposit them, as opposed to this year’s relocations.

She said the sand on the beach will be 3 feet higher in some areas, which means lights previously not visible to turtles might now be seen.

Properties along the beachfront — and in some cases beyond it — must be compliant with FWC standards for turtle-friendly lighting.

So Fox will be conducting a preseason lighting inspection, then another May 1, 2021, contracted by the Corps and the county, to determine what has changed since the renourishment project and what lights must be brought into compliance. Code compliance in each city also will conduct lighting inspections.

“Our inspections better match up,” Fox said. “Any lights that are not compliant must be corrected when season starts. Everybody must be accountable.”