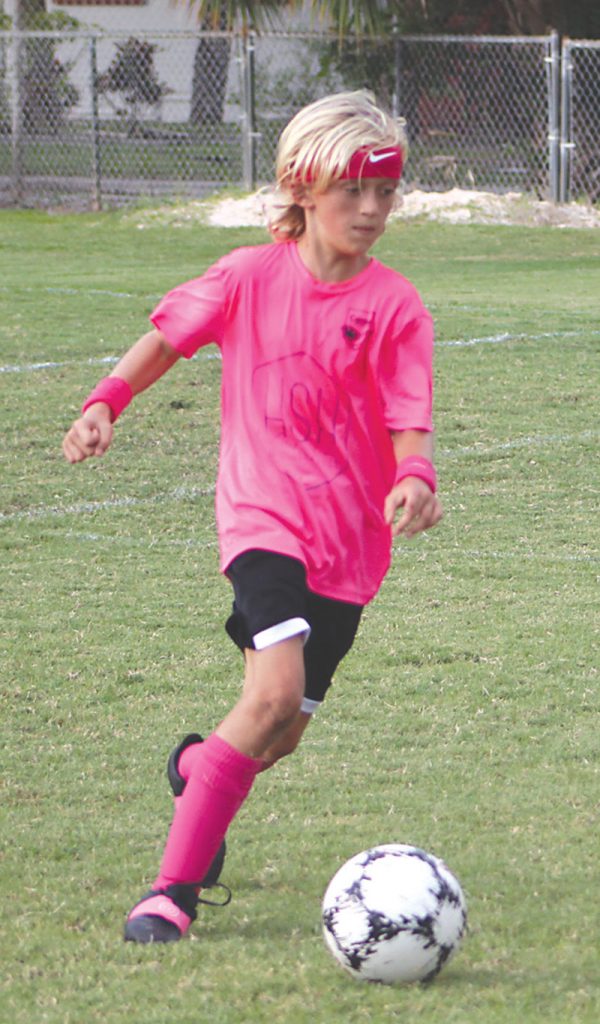 A week of no rain saw football and soccer play on at the Center of Anna Maria Island, while golf in Holmes Beach and horseshoes in Anna Maria rounded things out.

After two weeks of action in the adult flag football league, there are two teams chasing perfection. Solid Rock Construction is on top of the standings at 2-0 with 1-0 Ugly Grouper on their heels. Sandbar, Slim’s Place, Moss Builders and Beach Bums follow with matching 1-1 records, while Gulfview Windows and Doors at 0-1 and Progressive Cabinetry at 0-2 are in search of victory.

The action kicked off Sept. 24 with Moss Builders earning a 35-24 victory over Gulfview Windows and Doors behind three touchdown passes and a rushing TD from Ryan Moss. Jonathan Moss contributed rushing and receiving touchdowns, while Evelyn Long and Carter Cole each added a TD catch to the victory.

Matt Briley had a strong game for Gulfview, finishing with two touchdown passes and a rushing and receiving score. Jason Sato added a touchdown pass, while Jordan Demers and Cory Banks each finished with touchdown receptions in the loss.

The second game of the evening saw Beach Bums outscore Sandbar 41-36 behind five touchdown passes and a rushing touchdown from quarterback Matthew Manger. Kemo Harris was his top target, finishing with six catches, including three for touchdown. Dina DeJesus and Jaret Rojas each finished with touchdown catches in the victory.

The last game of the evening saw Ugly Grouper swim past Progressive Cabinetry 39-6 behind Ray Gardner’s four passing TDs, a rushing touchdown and a pick-six on defense. Ava Zink added a pair of touchdown receptions and Jay Hoffmeister and Ben Sato completed the scoring with touchdown grabs.

Brandin Holcomb connected with Brandon Kull for the lone touchdown in the loss for Progressive Cabinetry.

Youth soccer completed its third week and the battle for first place is far from decided in both divisions.

The action kicked off in the 8-10 division Sept. 22 with Progressive Cabinetry cruising to a 3-0 victory over HSH Designs. Jack McCarthy led the way with a pair of goals and an assist and Jesse Zaccagnino added a goal. Jack Zaccagnino and Cammie Rudacille combined on seven saves to preserve the victory.

Paxton Lee helped keep the game close for HSH Designs with five saves in the loss.

Nixon Connor scored for Miz & Hiz Biz, while Liam Nunez made four saves in the tie.

The last match of the evening saw Tidy MD and Gulf Drive Cafe battle to a 1-1 tie. Victor Albrecht scored for Tidy MD, while also coming through with six saves.

Carter Eurice notched the lone goal in the tie for Gulf Drive Cafe, which also received a combined six saves from Aidan Gannon and Katelyn Cecil.

Golf action at the Key Royale Club in Holmes Beach teed off Sept. 21 with a nine-hole modified Stableford-system match.

John Kolojeski fired a plus-4, four points above his average score, to win the day’s event. Ken Butler, Pat Dea, Bill Dimenna and Al Waal all finished at plus-2 to finish in a four-way tie for second place.

The women took the course Sept. 22 in a nine-hole individual-low-net match in two flights.

Sue Wheeler grabbed first place in Flight A with an even-par 32 to edge second-place finisher Meredith Slavin by a stroke.

Penny Williams and Terry Westby both carded even-par 32s to tie for first in Flight B.

The men were back on the course Sept. 24 for a nine-hole shamble that counted the top two scores for each foursome.

The team of Ken Butler, Jon Holcomb, Jana Samuels and Quentin Talbert took first place with a score of 8-under-par 56, with the team of Pat Day, Ken Nagengast and Mike Riddick two strokes back in second.

Four teams emerged from pool play with 2-1 records and battled it out for the day’s championship during Sept. 23 horseshoe action at the Anna Maria City hall horseshoe pits.

In the first semifinal, Neil Hennessey cruised past Tim Sofran 21-12, while Bud Meyers and Bob Heiger combined on a 22-0 shutout victory over Gary Howcroft and Tim Reiber.

Hennessey stayed hot in the finals, earning a 21-6 victory over Meyers-Heiger to earn the day’s bragging rights.

Two teams met in the finals during the Sept. 26 games with matching 2-1 records. The team of Jerry Disbrow and Heiger jumped out to an early lead and held on for an easy 22-3 victory over Hennessey.