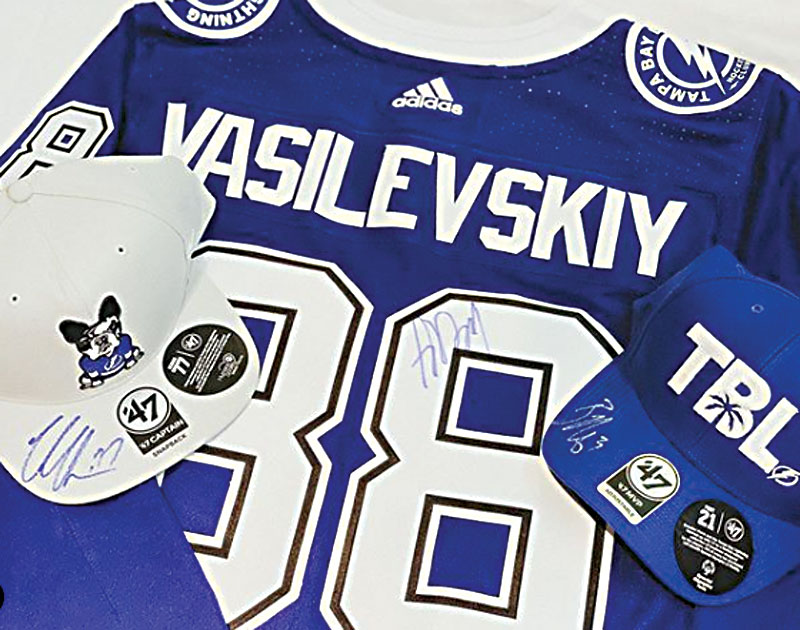 Bolts swag was offered as prizes in a raffle held by Sean Murphy during the Stanley Cup finals. Winners were announced Oct. 1. The signed jersey was donated by Lightning CEO Steve Griggs. Islander Courtesy Photo

The standings are still pretty tight after three weeks of action in the kids fall soccer league at the Center of Anna Maria Island.

The 8-10 division has Beach Bums and Progressive Cabinetry sharing first place with matching 2-0-1 records, just ahead of second-place Moss Builders, which stands at 1-1-1. HSH Designs follows at 1-2, while Miz & Hiz Biz is 0-3-1.

Action Sept. 29 for the 8-10s saw Beach Bums edge Moss Builders by a 1-0 score behind a goal and all-around play from Hayden Eurice. Ryan Cyrus had four saves in goal to help preserve the victory.

Austin Guess and Xane Flores teamed for three saves in the loss.

The second match of the night saw Progressive Cabinetry outscore Miz & Hiz Biz 3-1 behind a pair of goals from Jack McCarthy. Jesse Zaccagnino added a goal, Cammie Rudacille chipped in with an assist and Jack Zaccagnino made six saves in the victory.

Nixon Connor scored the lone goal for Miz & Hiz Biz while Liam Nunez and Bam Gartman combined on nine saves in the loss.

Action in the 11-14 division opened up with Tidy MD cruising past Slim’s Place on a 3-1 score behind a strong all-around game from Victor Albrecht. Albrecht had a hat trick and made three saves in goal, while Frankie Coleman added an assist for the victory.

Maddison Ferrari notched the lone goal for Slim’s, which also received a save and an assist from Elek Brisson in the loss.

After two weeks of action in the fall adult soccer league at the center, Slim’s Place is alone at the top of the standings with a 2-0 record. Right on its heels with matching 1-0-1 records are Signature Granite and Blalock Walters. They are followed by a trio of 1-1 teams: Solid Rock Construction, Sato Real Estate and Ugly Grouper. Skinny’s and Progressive Cabinetry round out the standings with 0-2 records.

The action kicked off Sept. 30 with Slim’s Place rolling to a 7-3 victory over Solid Rock Construction on a hat trick from Brent Moss and two goals and an assist from Kevin Roman. Nick Bouchard added a goal and an assist and John Coleman added a goal.

Neil Fellowes scored a pair of goals to lead Solid Rock, which also received a goal from Connor Bystrom and eight saves from Mark Long in the loss.

The second adult match of the night saw Signature Granite and Blalock Walters battle to a 6-6 tie. Signature Granite’s Zach Lieb led all players with five goals, while Zoran Kolega added a goal and an assist. Steve Oelfke helped preserve the tie with five saves in goal.

Sato then outscored Skinny’s Place 9-6 behind four goals from Raul Loria and three goals from Jessica Williams. John Haggarty and Trevor Fair each scored goals and Rico Beisert made nine saves between the pipes in the victory.

Kevin Bell and Jonathan Aragon scored two goals each for Skinny’s, which also received goals from Katie Christianson and AJ Colagiovanni. Garret Richelieu came through with six saves in the loss.

Ugly Grouper closed out the Sept. 30 action with a 7-3 beat down of Progressive Cabinetry behind a hat trick from Ben Sato and a goal and three assists from Chris Scott. Nate Welch and Eliza Faillace completed the scoring, while Robb Marshall came through with 11 saves in the victory.

Progressive Cabinetry was led by two goals from Daniel Adan and a goal each from Andrew Sullivan and Keith Mahoney in the loss.

The adult flag football league at the Center of Anna Maria Island completed its third week and only one team remains undefeated. Solid Rock Construction is holding first place at 3-0, just ahead of Sandbar and Slim’s Place, which both boast 2-1 records. Ugly Grouper is 1-1 followed by Moss Builders, Beach Bums and Progressive Cabinetry, all at 1-2. Gulfview Windows and Doors falls in last with an 0-2 record.

The action Oct. 1 kicked off with Progressive Cabinetry cruising to a 45-20 victory over Gulfview Windows and Doors behind five touchdown passes from Brandon Kull and one from Wendell Williamson. The duo connected with Donnie Dietch twice, while Kull, Brandin Holcomb and Cam Winston each added a touchdown catch. Winston also added to the scoring with a pick-six interception return for a touchdown.

Jason Sato threw four touchdown passes, including two to Matt Briley to lead Gulfview Windows and Doors, which also received touchdowns from Jordan Demers and an unnamed player in the loss.

Sandbar outlasted Moss 31-30 behind a huge game from Chase Richardson, who threw for a pair of TDs and ran for two. Anthony Mannino finished with two TDs, a 2-point conversion and an extra point.

Moss Builders was led in the loss by Ryan and Jon Moss who combined to throw five touchdown passes with Ryan Moss on the receiving end for a TD. Cole Carter finished with a pair of TDs, while James Roadman and Zack Long each added a touchdown catch.

Slim’s Place rode a defense that had three interceptions, including two by Connor Haughey that he turned into pick sixes for a 19-12 victory over Ugly Grouper. Keith McQuillen connected with Haughey for a touchdown pass and Luis Campos added an extra point to complete the scoring for Slim’s in the victory.

Ugly Grouper was led in the loss by TDs from Ray Gardner and Octavious Cole.

Matthew Manger threw for a score and ran for a score to lead Beach Bums, which also received a touchdown catch from Dina DeJesus and a pick six from Jaret Rojas in the loss.

Island restaurateur Sean Murphy put out some swag — autographed gear — for a raffle in advance of the Stanley Cup finals for three lucky fans.

The first prize, a jersey signed “by the friendly giant and superstar goalie Andrei Vasilevskiy” was won by Henry Lawrence. You may recognize his name from a 13-season career with the Oakland/LA Raiders.

He showed his love for both by sponsoring the raffle during the NHL hockey finals, with prizes donated by his pal, Bolts CEO Steve Griggs.

The raffle winners were announced Oct. 1.