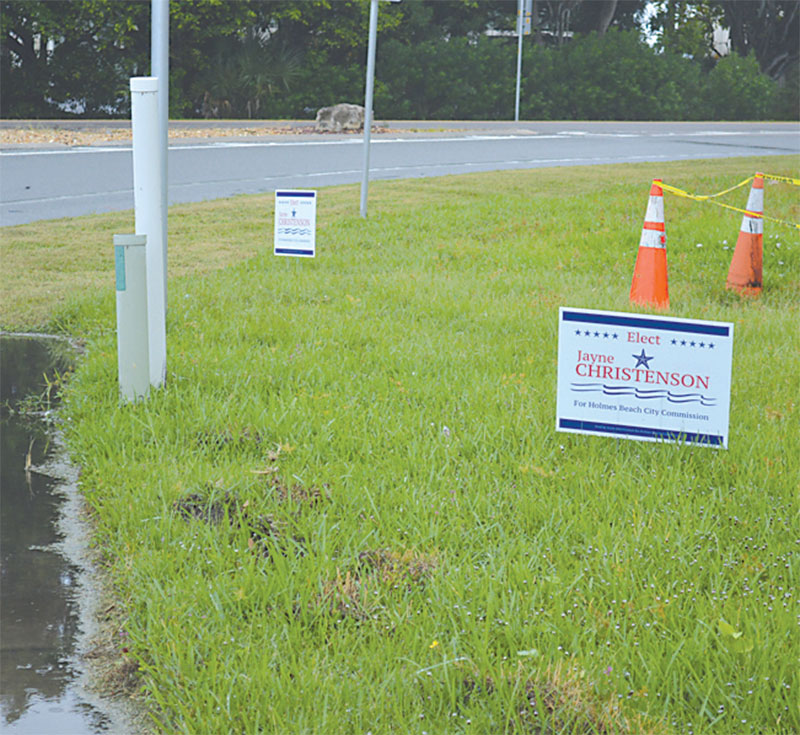 Holmes Beach candidate Jayne Christenson was notified Oct. 10 that some of her signs violated the rights of way on East Bay Drive and Manatee Avenue. Islander Photo: ChrisAnn Allen

Bob Bolus, owner of the defunct Bank of America property in the 600 block of Manatee Avenue in Holmes Beach, posted three political flags on the walls of the building that were determined to be in violation of city code that requires flags to be attached to poles.

On Sept. 30, Bolus reported political signs posted on the lawn at his property were vandalized and the city was still investigating as of Oct. 10.

Earlier in the week, the city issued Bolus a notice of violation for the flags, which gave him until Oct. 12 to remove the flags from the building. They were gone by the afternoon on Oct. 10, although Holmes Beach code compliance supervisor JT Thomas said earlier that day that Bolus had not responded to his calls or reacted to notices posted at the property.

Also, on Oct. 9, nine signs placed by Commissioner Pat Morton for his reelection in the 3000 block of East Bay Drive and several other locations were reported stolen overnight. The Holmes Beach Police Department was investigating the crime as of press time for The Islander.

If someone steals or otherwise removes a sign from someone else’s yard, the offense is treated as a theft.

Additionally, city and state regulations specify that signs must not be placed in the right of way, a possible safety hazard.

It was reported to the city Oct. 9 that commission candidate Jayne Christenson placed multiple signs close to the road at the intersection of East Bay Drive and Manatee Avenue.

Thomas said Oct. 10 that code compliance asked Christenson to move her signs and later that day two of her signs remained but were set back from the right of way. By sunset the same day, the signs had been removed.

“We make sure to give everyone an opportunity for freedom of expression and when we speak with them, candidates always comply,” Thomas said. “They just need to stay within the city codes.”