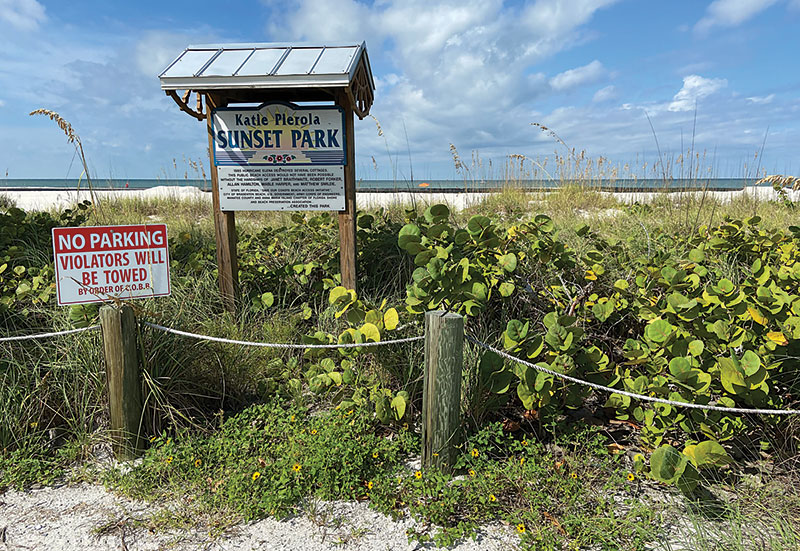 More improvements are in store.

Maro, who proposed the project, said the park’s pathway to the beach has been narrowed by overgrown seagrape plants and other vegetation. She suggested pruning the vegetation and widening the walkway, then installing ropes and bollards to delineate a clear path and prevent erosion.

She also proposed adding two benches and planting trees to provide seating area and shade for parkgoers in lieu of the picnic tables and tiki huts that were there but removed after sustaining storm damage.

“I think this looks like something that, for the most part, we can do,” Mayor John Chappie said.

“It sounds great,” Commissioner Jake Spooner said. “I appreciate Marilyn for bringing this to our attention.”

Building official Steve Gilbert said the park is set beyond the Coastal Construction Control Line, so any improvements require a permit from the Florida Department of Environmental Protection.

City engineer Lynn Burnett said the city may be able to include the improvements as work under a Florida Department of Transportation permit for Gulf Drive beautification to cut costs and save time.

Woodard said he would return to the commission with pricing for the work.

There was no public comment and Commissioner Jan Vosburgh moved to authorize Woodard to complete the work. Maro seconded the motion.

City attorney Ricinda Perry advised on a couple of Bridge Street improvement projects, including one to replace the strip’s solar-powered lighting with LED- powered lighting to improve vehicle and pedestrian

While the city must wait 8-11 weeks for a street- light manufacturing backlog to smooth out, Perry said she soon may call a special community redevelopment agency meeting to discuss the “big-ticket” cost.

In the meantime, Care Electric relocated five solar-powered streetlights from Third Street North to Bridge Street to improve lighting, however, three of the streetlights failed. The contractor plans to repair the malfunctioning fixtures in the coming weeks.

“I think this was a great safety move on the city’s part,” Perry said.