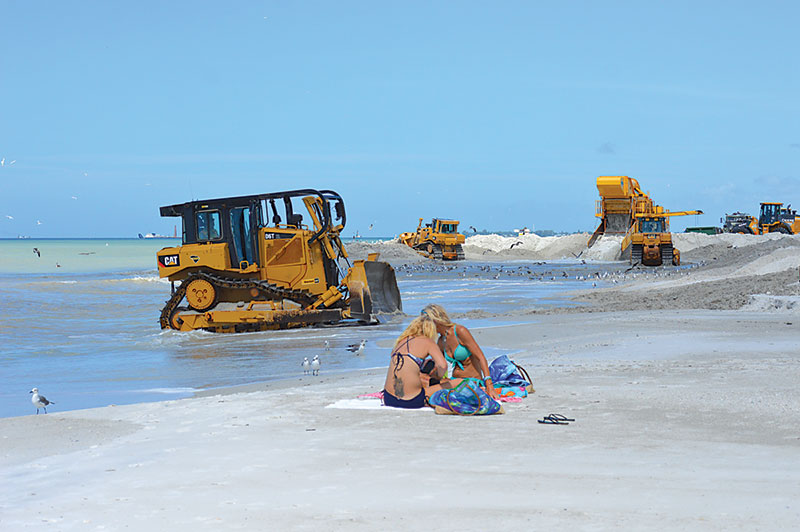 Renourishment project advances through Bradenton Beach A pair of beachgoers and a bevy of birds flank equipment Oct. 6 behind the Beach House Restaurant in Bradenton Beach. The bulldozers and the large sand separator are part of a $17 million project to add about 250 feet of new beach on its path from the north end of Holmes Beach to the south end of Bradenton Beach at Longboat Pass. Islander Photo: ChrisAnn Allen 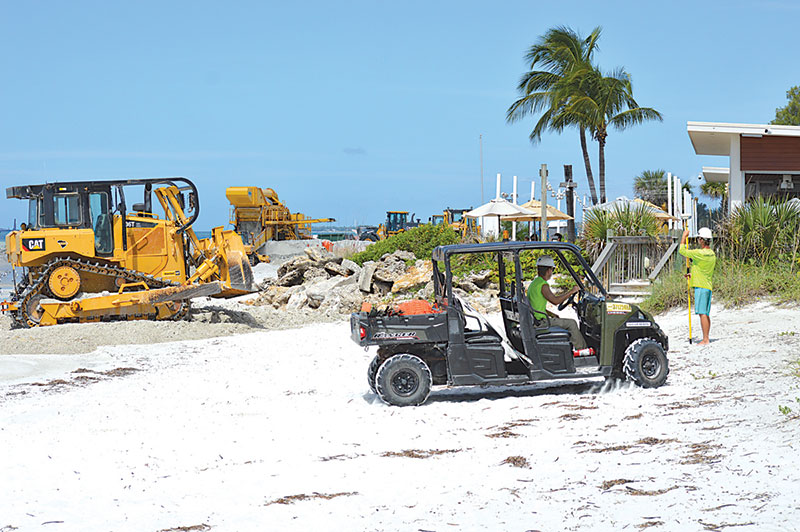 A bulldozer pushes fresh sand, pumped from an offshore seabed, toward the rocks on the west edge of the Beach House Restaurant, 200 Gulf Drive N., in Bradenton Beach, while a contractor uses a GPS device to check the height of the sand. The project, which started July 8 near 77th Street in Holmes Beach, will end at Longboat Pass. Renourishment was about 75% complete as of Oct. 2, and should be finished by late October or early November, according to the Manatee County website. Project updates can be viewed at mymanatee.org/beachproject. 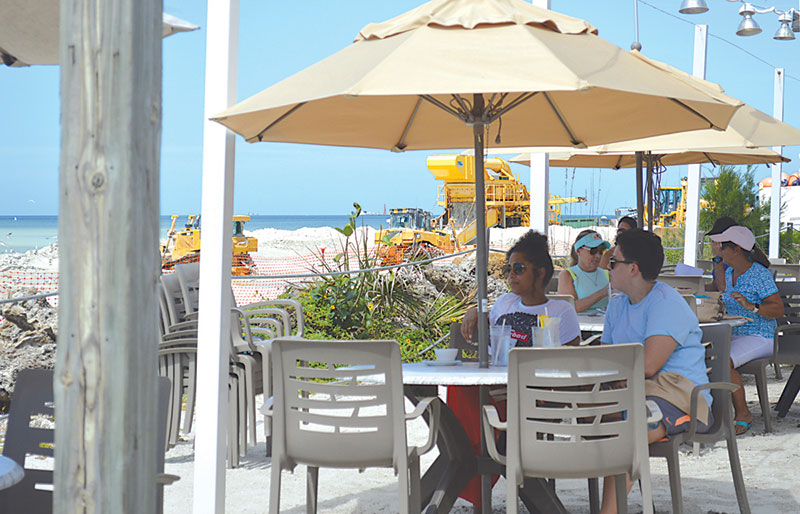 People watch while they dine Oct. 6 as a $17 million beach renourishment project replenishes sand behind the Beach House restaurant, 200 Gulf Drive N., Bradenton Beach. “It’s actually kind of fascinating to watch,” Bob Billstone of Oklahoma said Oct. 6, while at the restaurant. “Definitely not something I am used to seeing back home.” Upon completion, the project, will have renourished sand along 5.5 miles of Anna Maria Island beaches.

Beach renourishment on Anna Maria Island paused Oct. 7 for the passage of Hurricane Delta in the Gulf of Mexico, about 800 miles west of Tampa Bay.

“The Dredge Savannah ceased operations last night and is heading into Egmont Key for shelter due to Hurricane Delta sea conditions,” David Ruderman, communications representative for the U.S. Army Corps of Engineers, a funding source for the $17 million project, along with the state and Manatee County, wrote The Islander Oct. 8.

Ruderman wrote that the contractor must wait for residual swells to calm before resuming operations, likely starting Oct. 14-15.

Work will pick up just south of Second Street South and continue to about Fourth Street South in Bradenton Beach, then the crew will reconfigure the pipeline to work the section southward toward Coquina Beach, “and all the interested parties are quite satisfied with the quality of the work accomplished so far,” he wrote.

As of Oct. 8, the $17 million renourishment project has piped more than 800,000 cubic yards of sand onto the beach from offshore borrow areas via the Savannah, sometimes employing an additional booster dredge.

Construction began July 8 near 77th Street in Holmes Beach. The project is expected to run through October or early November and will end at Longboat Pass.

People can visit mymanatee.org and search for “beach renourishment updates” for more information about the project.