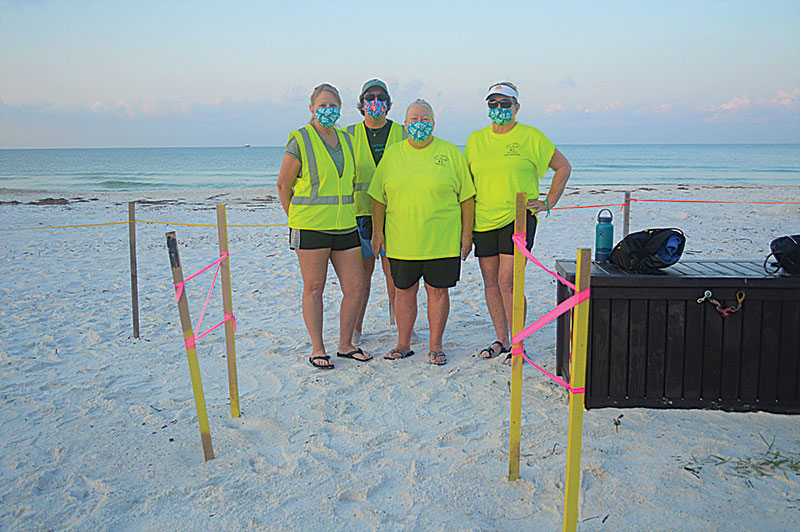 AMITW volunteers Linda Oneal, Amy Waterbury, Barbara Riskay and Carla Boehme pose Oct. 14 between the last two sea turtle nests yet to hatch in the nursery near Peppertree Lane in Anna Maria before season ends Oct. 31. The team has been collecting data since nests began hatching in July. The data is shared with the state and Manatee County. Islander Photo: ChrisAnn Allen

Sea turtle nesting season on Anna Maria Island is all but over.

However, people must remain vigilant of possible “surprise hatches” through early November in all areas of the beach but, the days are counting down at a nest nursery established between White Avenue and Peppertree Lane near the border between Holmes Beach and Anna Maria, according to Anna Maria Island Turtle Watch and Shorebird Monitoring director, Suzi Fox.

Since May, turtle watch relocated 349 clutches of eggs to human-made nests to the nursery, out of harm’s way from a sand renourishment project, which started July 8 near 77th Street in Holmes Beach and was planned to end the first week in November at Longboat Pass.

As of Oct. 16, two nests in the nursery remained to hatch and 20,174 hatchlings had made their way to the Gulf of Mexico.

But Fox said there might be nests laid in other areas that turtle watch volunteers did not spot on their morning ATV patrols. So people must adhere to turtle-friendly lighting regulations, as any of the unknown nests could hatch late.

“Surprise hatches happen every year,” Fox said. “We do the best we can to spot them all, but occasionally they fool us.”

Additionally, nests laid north of the project in Anna Maria were counted but not monitored for data, so those nests were not staked off and hatch data was not documented.

In the meantime, a small team of volunteers has been excavating hatched nests in the nursery, since flotillas of hatchlings — usually about 100 per nest — started emerging in July.

Linda Oneal, one of the nursery volunteers who dug new nests for relocated eggs early in season, has been conducting excavations and collecting data in the mornings.

Oneal and teammates Carla Boehme and Barbara Riskay wait 72 hours after a nest hatches, per Florida Fish and Wildlife Conservation Commission regulations, then dig into the nests to count how many eggs hatched, didn’t hatch, or if there are dead or live hatchlings remaining. The data is shared with the state and Manatee County and live hatchlings are released to the Gulf of Mexico.

“I’ve learned a lot as I’ve never gone through this before with renourishment,” Oneal said. “We’re tired but we don’t want it to end.”

For more information on the nesting season, contact AMITW executive director Suzi Fox at suzifox@gmail.com or 941-778-5638.