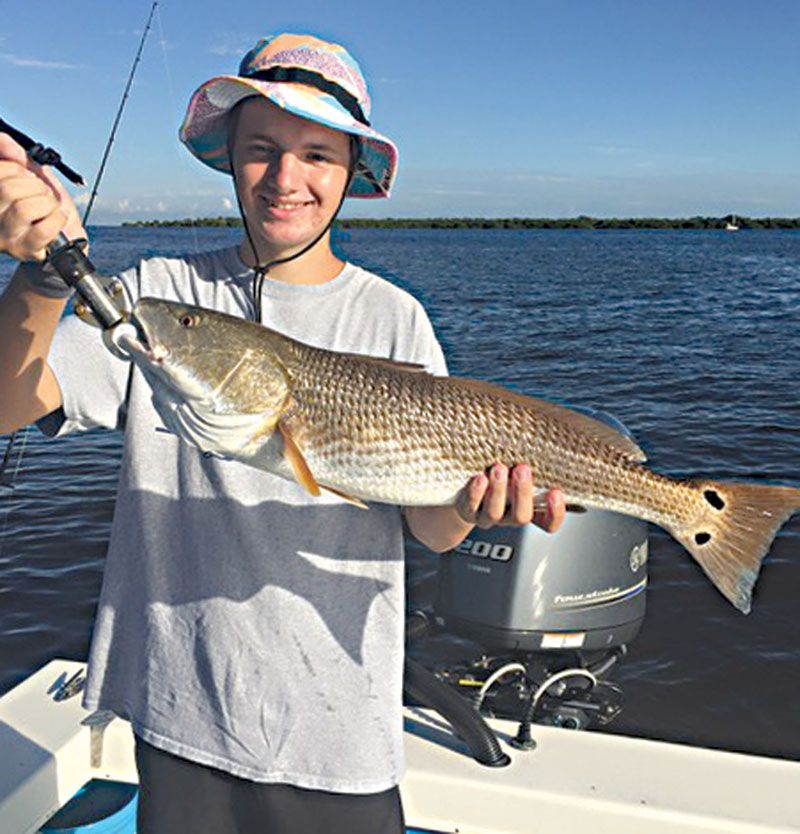 Spot on Nick Crowell of Atlanta shows off a 28-inch redfish caught and released Sept. 29 while fishing inshore near Anna Maria Island with Capt. Danny Stasny of Southernaire Fishing Charters. 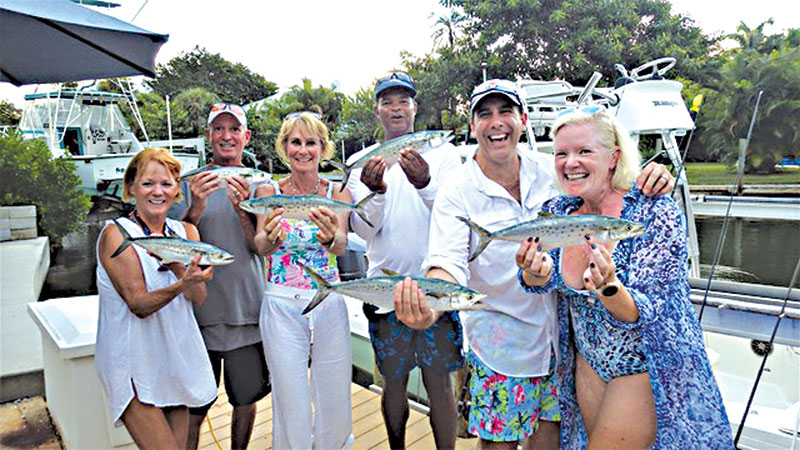 Friends from Longboat Key and Sarasota — Chris and Bryan Goodwin, Brenda Moore-Terihay, Ron Shields, Marc Pommainville and Stacey Allerton — fished Oct. 4 in Sarasota Bay with Capt. Warren Girle. The group used shiners for bait and caught numerous mackerel. The highlight after catching dinner was a 6-foot hammerhead, caught by Pommainville and then released.

During the past week’s cold fronts, we saw both inshore and offshore species becoming active.

Throughout the inshore waters of Tampa Bay, Spanish mackerel are making a presence, along with a variety of other migratory fish, including jack crevalle, ladyfish, blue runners and bluefish.

Using light spinning tackle for such bites can be entertaining.

All of those species readily take a bait and they all fight well for their size. They are attracted to live bait and artificials, which makes them attainable to all anglers.

For those who chose lures, I suggest jigs and spoons. Small jigs in white, pink or chartreuse will get the job done. As for spoons, anything silver should do the trick.

On the flats of Tampa Bay, popular catch-and-release species — snook, redfish and spotted seatrout — are apparent and hungry.

Casting a free-lined shiner over the shallow flats is resulting in a bite from snook and redfish. For the trout, deeper grass flats are best.

These species can be taken on live baits or artificials. Live bait presentations work best, but lures, such as top-water poppers, attract bites, too. Bottom fishing with bait while offshore is producing a bite, especially on yellowtail and mangrove snapper. Red and gag grouper also are being caught.

On my Southernaire charters, I’m seeing vast numbers of spotted seatrout on the hook. On some of the deeper grass flats, I’m seeing 20-30 trout caught in one area. Most of the fish are keeper-size, which is encouraging to see if the FWC is ever to open the species up for harvest again.

Targeting catch-and-release snook along the mangrove shorelines is productive, with most catches 20-30 inches.

Catch-and-release redfish are coming to the boat in basically the same manner as the snook and schooling redfish are available if you know where to look.

Fishing structure in Tampa Bay is a good bet as I’m seeing as many Spanish mackerel as one person would want to catch. The bite is quick and abundant.

Mixed in with the macks are jacks, ladyfish, bluefish and some tasty keeper-size mangrove snapper.

While on this bite, Girle is putting anglers on limits of mangrove snapper.

Moving into Tampa Bay, Girle is working structure and producing great action on Spanish mackerel. He says a bite is occurring on just about every bait cast into the water.

On shallow grass flats, Girle is casting top-water plugs on a jig head to target catch-and-release snook and redfish. He reports both species are responding nicely.

Capt. Jason Stock is catching blackfin tuna while working the offshore waters in the Gulf of Mexico. The tunas are being caught while free-lining live baits for yellowtail snapper. As for the snapper, near limits are being caught.

Pelagic species — amberjack, kingfish and cobia and even a sailfish — are coming to the boat while offshore.

As we experience more cold fronts, the bite on the pelagics will get better and better, Stock predicts.

Jim Malfese at the Rod & Reel Pier says despite rough waters due to windy weather, the fishing is quite good on the north end of Anna Maria Island.

Catch-and-release species — snook and redfish — also are being hooked.

Pier fishers working with heavy tackle rigged with large baits fished on the bottom are hooking into some blacktip sharks and an occasional tarpon.

Lastly, artificials such as small white jigs are working on some of the macks, ladyfish and blue runners.