Sept. 27, 300 block of Tarpon Street, recovered weapon. The Manatee County Sheriff’s Office received a report that a guest in an Airbnb lodging left his gun behind in the accommodation. A deputy obtained access to the home to recover the gun and return the weapon to the owner.

Sept. 24, Anna Maria Island Inn, 2218 Gulf Drive N., larceny. A couple that stayed at the inn called the Bradenton Beach Police Department to report they forgot a credit card in their room and it was being used without their permission. The caller stated that the card activity began after an employee asked for information in order to mail the card back.

Sept. 27, 1300 block of Gulf Drive North, larceny. A patrolling BBPD officer spotted a man who said someone entered his vehicle — which he thought was locked — while he was working and took a suitcase containing documents, including his Social Security card. The officer found no prints or signs of forced entry, so he gave the man a victim’s rights pamphlet and a case number.

Sept. 29, Drift In, 120 Bridge St., domestic disturbance. A BBPD officer responded to a call from the Holmes Beach Police Department regarding a domestic disturbance that began in Bradenton Beach. Upon arrival, the officer found a woman who said her husband found her with another man at the bar and began yelling at them before she left on the Island Monkey Bus. The husband followed the bus, yelling from his vehicle before it stopped at the HBPD. The two were told to remain separated for the night.

Sept. 23, Manatee Public Beach, 4000 Gulf Drive, warrant. While on beach patrol, a Holmes Beach police officer observed a person lying on a picnic table. The officer determined there was a warrant for the individual in Manatee County. The person was transported to the Manatee County jail.

Sept. 24, Jessie’s Island Store, 5424 Marina Drive, trespass. An HBPD officer responded to a verbal disturbance. The store manager told a customer to wear a face mask upon entering the store and the customer refused. The person was issued a one-year trespass notice from the store.

Sept. 24, Bali Hai Beach Resort, 6900 Gulf Drive, burglary. A person reported $250 missing from a locked hotel room. The resort provided the HBPD with a list of housekeepers on duty.

Sept. 26, Manatee Public Beach, 4000 Gulf Drive, alcohol. An officer was called to the public beach for a fight and possible overdose. Upon arrival, the officer determined the subject was intoxicated but conscious. The officer observed a bottle of alcohol next to the individual, who was cited for alcohol on the beach.

Sept. 27, 200 block of 65th Street, noise. An officer was dispatched to a rental for a noise complaint. The officer could hear yelling two houses away from the origin of the complaint. The tenant where the noise originated was cited.

Sept. 27, 100 block of 52nd Street, information. An officer was dispatched to a fight in progress over a beach access parking spot. One person said the other person pulled a vehicle into a spot and tried to hit him with the car while he was standing in the space, holding the spot for a family member. The dispute was resolved and no charges were filed.

Sept. 27, Manatee Public Beach, 4000 Gulf Drive, disturbance. An officer observed three people in a verbal altercation. One person said another scratched and hit him. Witnesses stated the injuries were self-inflicted. The injured person was transported to the hospital and the other two people left the beach.

Sept. 27, The Ugly Grouper, 5704 Marina Drive, trespass warning. A restaurant manager contacted the HBPD about a person who allegedly was trying to start a fight with another customer. An officer arrived and trespassed the person who was instigating the argument from the property.

Sept. 28, Bali Hai Beach Resort, 6900 Gulf Drive, theft. A person reported a firearm missing from a room. HBPD officers spoke with an employee, who admitted to stealing the firearm and led officers to where it was hidden. The firearm was returned and the gun owner did not press charges. 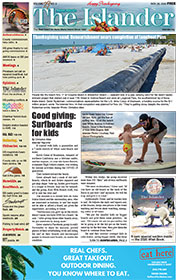