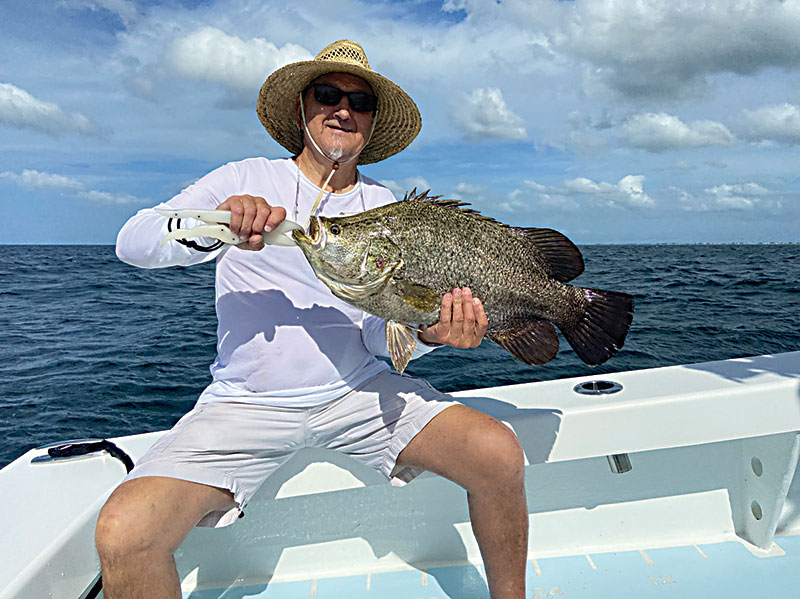 August Mrozowski of Springfield, Illinois, formerly of Anna Maria Island, shows off a nice tripletail grouper caught on a shiner offshore of Longboat Key on a charter fishing trip with Capt. David White of Anna Maria Charters. Mrozowski barely got home before cooking up some of his catch. He is a recently retired owner/chef of Augie’s Front Burner and former chef at Cafe L’Europe.

As for the offshore anglers, strong winds make it challenging to travel any kind of distance offshore in the Gulf of Mexico.

On days when the winds are slightly lighter, fishing offshore is productive, although the windows of opportunity are few and far between.

On the good days, offshore fishers are enjoying action on red and gag grouper, as well as numerous varieties of snappers.

Migratory fish — blackfin tuna, cobia and even some sailfish — are being reported by anglers free-lining baits on the surface.

Moving inshore, fishing along the beaches on days when the winds are out of the east is good for Spanish and king mackerel, bonito and sharks of all kinds.

For the sheer action, this bite is where it’s at.

If you prefer fishing the flats, catch-and-release redfish are making a showing. Mangrove shorelines , where oyster bars and good tidal flow exist, are great places to look. Catch-and-release snook can be found in these areas, too.

Fishing on deeper grass flats is excellent for catch-and-release spotted seatrout, especially during the last half of the incoming tide.

Capt. Aaron Lowman is fishing inshore throughout the grass flats of Tampa Bay south to Cortez. Catch-and-release species — snook, redfish and trout — are being caught frequently when using live shiners as bait. For the reds, fresh-cut ladyfish as bait works well — especially when the fish are schooled up. On structure in Tampa Bay, Lowman is finding plenty of action on Spanish mackerel, jacks and ladyfish. Also around the structure, Lowman is hooking into keeper-size flounder.

Capt. Jason Stock is fishing offshore when the seas are calm. Using live bait such as shiners is attracting red and gag grouper to the hook. Keeper sizes of both are being caught frequently by Stock’s clients.

Mangrove snapper of considerable size are being caught on live shiners. The fish are being found close to the bottom, around structure and hard bottom.

More toward the surface, Stock is hooking into blackfin tuna, cobia and sailfish. With the sailfish not being a frequent bite in local waters, hooking and landing them is a real treat. Stock reports he’s seeing some almost every trip offshore.

Jim Malfese at the Rod & Reel Pier says fishing is good for pier fishers using life shrimp as bait. Fishing live shrimp on the bottom with a weighted rig is resulting in a variety of fish, including black drum, mangrove snapper, flounder, sheepshead and some catch-and-release redfish. Catch-and-release snook are eating some of these live shrimp, too.

For pier fishers opting to use lures, silver spoons or small jigs are working well for Spanish mackerel, jack crevalle and ladyfish.

Capt. David White is fishing closer to shore this week due to strong winds and rough seas. Fishing along the beaches within a mile of shore is yielding excitement with bonito, Spanish mackerel and an occasional kingfish. Free-lining live shiners on a long shank hook is achieving this bite.

Numerous sharks are present, being caught on fresh-cut chunks of bonito.

Moving to the flats inside Tampa Bay, White is experiencing good action on catch-and-release redfish and snook. Catch-and-release spotted seatrout are being caught while fishing in the bay as well as some keeper-size flounder.