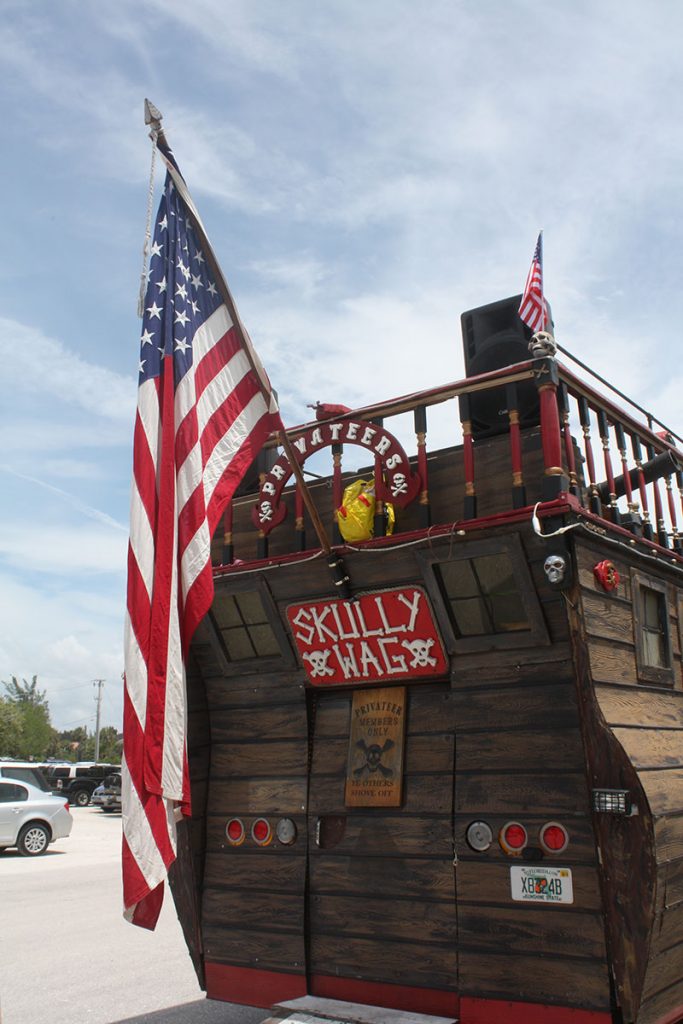 The Skullywag is adrift apparently, left without a place to park and perform upkeep and routine maintenance after Privateers learned they can no longer use the area adjacent to Holmes Beach Public Works and the new skate park.

The Skullywag is back on the road and the Anna Maria Island Privateers crew is planning to celebrate the boat-float’s return with a pub crawl.

The nonprofit invited people to meet the pirates on Bridge Street in Bradenton Beach starting at 11 a.m. Saturday, Nov. 28.

The pub crawl will begin at the Drift-In indoor/outdoor tavern, 120 Bridge St.

Earlier this month, the Privateers announced the cancellation of its annual, islandwide Christmas parade and post-parade party for kids and Santa Claus, citing the coronavirus pandemic.

However, the group is organizing the pub crawl, as well as a Christmas party for up to 50 kids in lieu of their annual Christmas family adoption.

In a Nov. 20 email to The Islander, Boyd described pandemic precautions for the pub crawl: “While on the ship, as we have at all events and meetings, we provide masks and hand sanitizer to the members.”

She added, “This pub crawl is just for the krewe on our ship.” Also, the Privateers will observe establishment rules for precautionary measures.

From the Drift-In, the celebration will move to Tommy Knockers Saloon, 111 Seventh St. N., Bradenton Beach, and then to the mainland, according to liaison officer Tim “Hammer” Thompson Nov. 20.

The route was to be posted on the organization’s website, www.amiprivateers.memberlodge.org.

Because the pub crawl is not a public event, and the Privateers have permission to “dock” the Skullywag at the various stops along the crawl, unlike the Christmas parade, it did not require an event permit.

“If (the public) want to join us, that’s a fine thing,” Thompson said about the celebration. But the pub crawl is not a fundraiser, it’s a chance for the organization members to celebrate the revival of the boat/float.

“It’s been a long time since the Privateers, pirates and wenches have gotten into pirate garb, been aboard the Skullywag to sail the open road.”

Thompson invited everyone to join the celebration at any of the pubs. “Dress like a Pirate if you wish as fun will be had by all.” he wrote in a Nov. 20 news release.

The Skullywag followed an earlier boat/float in service in 2007, but “went down” at the end of January on the return to the island from the Gasparilla Festival in Tampa, Boyd said.

Suncoast Auto and Truck Repair in Bradenton repaired the “ship,” which was returned to the Privateers in mid-November.

Then the Privateers discovered they have a ship without a port. When they returned to their designated parking space alongside the public works department in Holmes Beach, they were informed they could no longer park there, Thompson said.

The Skullywag had been allowed to park there for many years and the city posted a large, green sign designating the spot as parking for “Privateers only.”

Now, Thompson said, the sign is gone and no one at city hall knows where it went.

But many improvements and changes have been made to the park in the course of the past year or so.

Holmes Beach Mayor Judy Titsworth said in a phone call Nov. 21 with The Islander that as the skate park popularity grew, having the Skullywag parked alongside the amenity became a safety concern.

But there are other areas on city property where the Privateers boat/float could potentially dock and those options are being looked into, the mayor said.

The other city properties the mayor is looking at aren’t as visible as the prior spot, which she said the Privateers expressed concern over.

The crew also needs access to utilities to perform maintenance.

“I’m still not convinced we can’t find a place for them to park,” Titsworth said.

As to the whereabouts of the sign, the mayor said the Privateers are working with public works staff to locate it.

For more information, call Thompson at 941-780-1668 or go to www.amiprivateers.memberlodge.org.