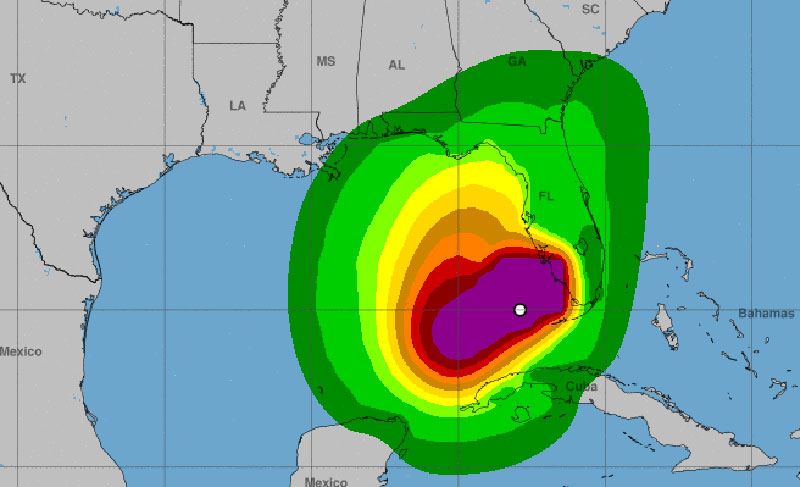 Tropical Storm Eta made landfall late Nov. 8 at Lower Matecumbe Key in the Florida Keys with maximum winds estimated to be near 65 mph.

“Eta could approach the Florida Gulf Coast later this week as a tropical storm,” the National Hurricane Center stated in an advisory at 4 a.m. Nov. 9.

The storm could bring “impacts from rain, wind and storm surge” and interests in the region should monitor Eta’s progress, the NHC cautioned in an advisory released as The Islander went to press.

That morning, with the storm about 60 miles south of Naples, there were dark skies over the Gulf but still a few walkers on the shore at the Manatee Public Beach, 4000 Gulf Drive, Holmes Beach.

On the south side of the county-run beach, large white tents were erected for the World’s Strongest Man competition, still set to begin Nov. 11, despite the weather forecast.

Gusty winds and a drizzle could be felt as Anna Maria Island came under a tropical storm warning.

And, already, the Sunshine Skyway Bridge was closed to traffic due to high winds.

County officials, in a news release, said people could expect “some winds and rain on Monday, into Tuesday night.

“After that time Eta is projected to take a turn to the north. Once it does, local officials will have a better idea of the storm’s track and potential local impacts.”

Island officials also were monitoring the storm and encouraging residents to be prepared.

“We are keeping up with the updates and making any decisions as it gets closer,” said Bradenton Beach police Detective Sgt. Lenard Diaz.

Also, a new sandbagger was placed at city hall, 5801 Marina Drive, for people in low-lying areas that might flood.

The building department was reaching out to contractors to make certain job sites were secured and code compliance was confirmed.

Additionally, the police department was watching projections to determine the next steps, per the city’s emergency operations plan, according to Mayor Judy Titsworth.

The city of Anna Maria did not respond by press time to The Islander’s inquiries.

People can text ManateeReady to 888-777 for the latest messages regarding any storm, as well as the coronavirus pandemic.