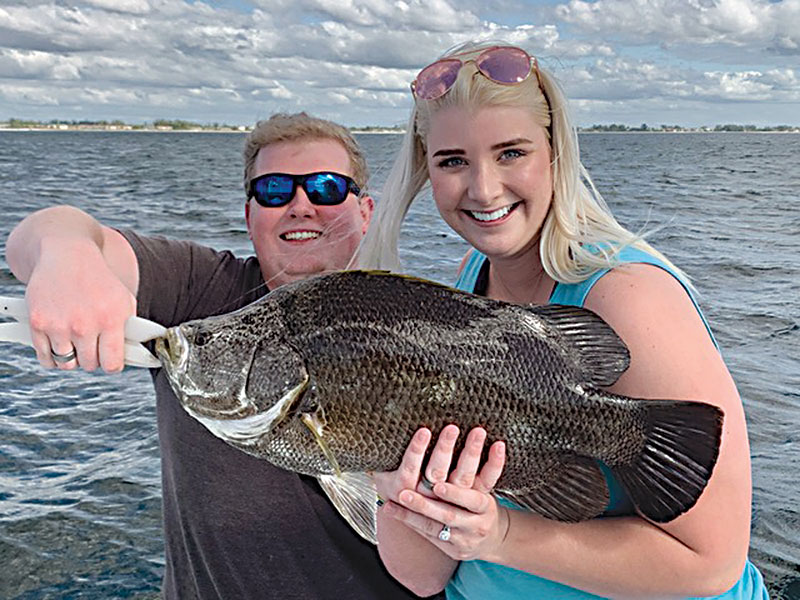 Newlyweds Clay and Montana Hatfield of Houston married Nov. 14. They show off a healthy tripletail they landed Nov. 20 on a live jumbo shrimp while on a honeymoon charter fishing trip with Capt. David White. Congratulations to the Hatfields! 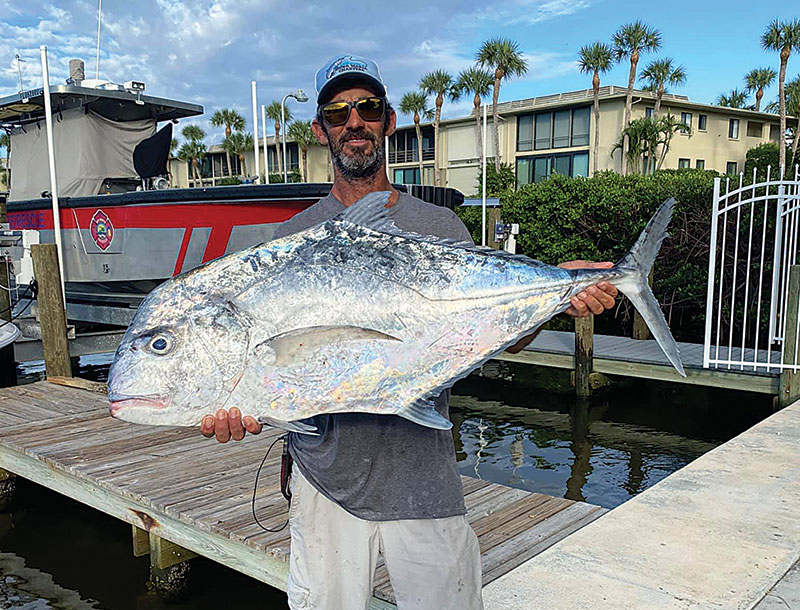 Platter size! Capt. David White of Anna Maria Charters shows off a super-sized pompano, suitable for a large Thanksgiving platter, Nov. 22 at the dock at the 63rd Street Boat Ramp in Holmes Beach.

Settling into fall fishing around Anna Maria Island means you’ll be getting used to fishing in the wind.

Well, at least it does this fall. With strong winds from the north and northeast, getting out to your favorite offshore fishing grounds may not be as easy as usual — or as frequent, for that matter.

The offshore anglers are boasting of great fishing in depths of 100 feet or more, although the days to reach these areas have been few and far between. Even fishing the inland waters around Tampa Bay south to Sarasota Bay is challenging with the wind kicking up.

But, don’t be discouraged.

Even on windy days, finding fish in the bay waters isn’t impossible.

You can always duck out of the wind and into the canals and cast your bait toward the docks and pilings for a bite.

Plenty of catch-and-release snook and redfish are taking the hook on the lee side of the mangrove shorelines. Casting live shiners in these areas is resulting in some great action. And, as overnight temperatures fall south of 70 degrees, you can bet these fish are going to eat, as they try to pack on the pounds in anticipation of winter’s approach.

As for catching shiners as bait, you’ll probably notice they are getting slightly harder to find. Determination and a little patience may be required — as well as an ample supply of chum.

Using shrimp as bait is an option, although it’s a little early to be shrimp fishing on the flats. There are still too many pinfish present, which prevents using live shrimp effectively. They end up getting nibbled off the hook before any substantial-size fish has a chance to discover them. That being said, artificials such as DOA CAL jigs and other assorted soft plastics will work — especially for catch-and-release spotted seatrout. With the abundance of trout in the bays, it would be quite easy to find success by drifting and jigging over the deep grass areas.

You can expect to encounter plenty of ladyfish and jack crevalle. They love to hit those jigs.

Lastly, if shrimp is your one and only option, try fishing the canals and surrounding residential docks and seawalls. Rumors of catch-and-release redfish and flounder being caught in these areas are floating around.

This bite is especially good at the Rod & Reel Pier, where pier fishers are catching numerous black drum and catch-and-release reds, as well as some flounder.

Capt. Aaron Lowman is working the flats of Tampa Bay south to Sarasota Bay on his charters. Casting free-lined live shiners along mangrove shorelines and oyster bars is resulting in numerous catch-and-release snook. Mixed in with the snook bite are some catch-and-release redfish. Moving away from the mangroves to slightly deeper water, where grass is present, is yielding many catch-and-release spotted seatrout, as well as some bluefish, jack crevalle and ladyfish. Traveling to deeper water in Tampa Bay is producing action — especially over structure — for Spanish mackerel and jack crevalle.

Capt. Jason Stock is venturing offshore in the Gulf of Mexico when the winds are light and the seas are calm. On those select days, Stock is finding a great mangrove snapper bite. Snapper up to 8-pounds are being caught on live shiners combined with a typical bottom rig.

On the windier days, when traveling offshore is not possible, Stock is staying close to the beaches. In depths of 20-30 feet of water, he’s got clients hooking into Spanish mackerel, kingfish and plenty of sharks of all varieties.

Jim Malfese at the Rod & Reel Pier says black drum and catch-and-release redfish have been the most prominent catch. Pier fishers using live shrimp fished close to the bottom under the pier are catching plenty of both species. Other fish being caught on shrimp include flounder, sheepshead and some catch-and-release snook. On the calmer days when the wind is blowing out of the northeast, pier fishers are casting lures — silver spoons, Gotcha plugs or white jigs — and they’re hooking into some mackerel and ladyfish.

Capt. David White is working offshore when the opportunity presents. With strong winds and rough seas, traveling long distances in the Gulf of Mexico can be nearly impossible. But on calmer days, White is heading out there.

Bottom fishing in the gulf is resulting in red grouper, a few pompano and yellowtail snappers up to 26 inches.

On the windy days, when going offshore is not feasible, White is staying in Tampa Bay to target the usual catch-and-release trio — snook, redfish and trout. The snook and redfish bite is going well for White’s clients with frequent catches of slot-size fish.