NOAA’s GOES-16 satellite took an image Sept. 14 showing five tropical systems spinning at one time in the Atlantic basin: Hurricane Sally in the Gulf of Mexico, Hurricane Paulette east of the Carolinas, the remnants of Tropical Storm Rene in the central Atlantic and Tropical Storms Teddy and Vicky in the eastern Atlantic. Ten named storms formed in September — the most for any month on record. Islander Images: Courtesy NOAA 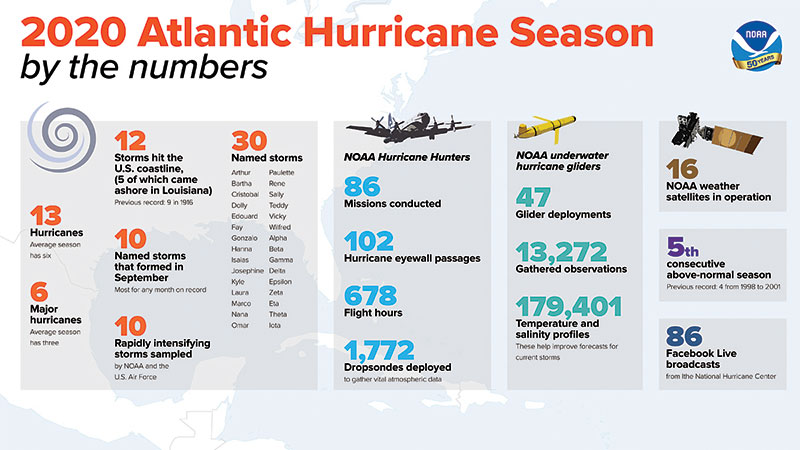 The 2020 Atlantic hurricane season is one for the history books. 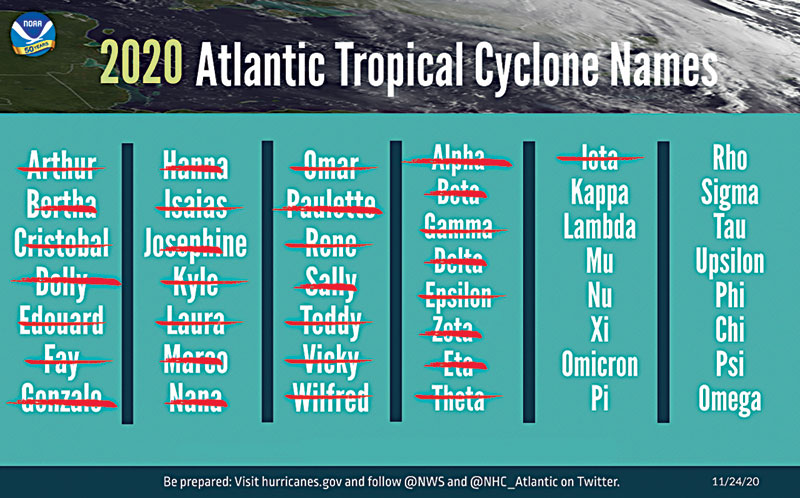 The 2020 Atlantic hurricane season ended Nov. 30, with a record-breaking 30 named storms and 12 landfalling storms in the continental United States.

While season concluded Nov. 30, tropical storms may continue to develop past that day and emergency management officials at the county, state and federal levels encouraged preparedness.

The seasonal hurricane outlook from the National Oceanic and Atmospheric Administration accurately predicted a high likelihood of an above-normal season with a strong possibility of it being extremely active.

U.S. Secretary of Commerce Wilbur Ross, in a news release, called the season relentless, and that’s likely how residents of the northern Gulf states, the Caribbean and Central America experienced the season.

On Anna Maria Island, multiple storms passing in the Gulf of Mexico roughed up waters, disrupting and delaying beach renourishment work and one storm, Tropical Storm Eta Nov. 11-12, was a factor in a death, caused by electrocution, as well as flooding, beach erosion and minor wind damage.

The season got off to an early and rapid pace with a record nine named storms from May through July, and then exhausted the 21-name Atlantic list when Tropical Storm Wilfred formed Sept. 18.

For only the second time in history, the Greek alphabet was used for the remainder of the season, extending through the ninth name on the list, Iota.

“The 2020 Atlantic hurricane season ramped up quickly and broke records across the board,” Neil Jacobs, acting NOAA administrator, said in a statement.

The season was the fifth consecutive one with an above-normal activity and there have been 18 above-normal seasons out of the past 26.

This increased hurricane activity was attributed to the warm phase of the Atlantic Multi-Decadal Oscillation — which began in 1995 — and has favored more, stronger and longer-lasting storms since that time.

Such active eras for Atlantic hurricanes have historically lasted about 25 to 40 years.

“As we correctly predicted, an interrelated set of atmospheric and oceanic conditions linked to the warm AMO were again present this year,” said Gerry Bell, lead seasonal hurricane forecaster at NOAA’s Climate Prediction Center. “These included warmer-than-average Atlantic sea surface temperatures and a stronger west African monsoon, along with much weaker vertical wind shear and wind patterns coming off of Africa that were more favorable for storm development.”

Also, scientists at NOAA’s Atlantic Oceanographic and Meteorological Laboratory and the Satellite and Information Service were able to deliver wave height information to forecasters using new instrumentation like the Ka-band Interferometric Altimeter.

The first seasonal outlooks will be released in April and May.