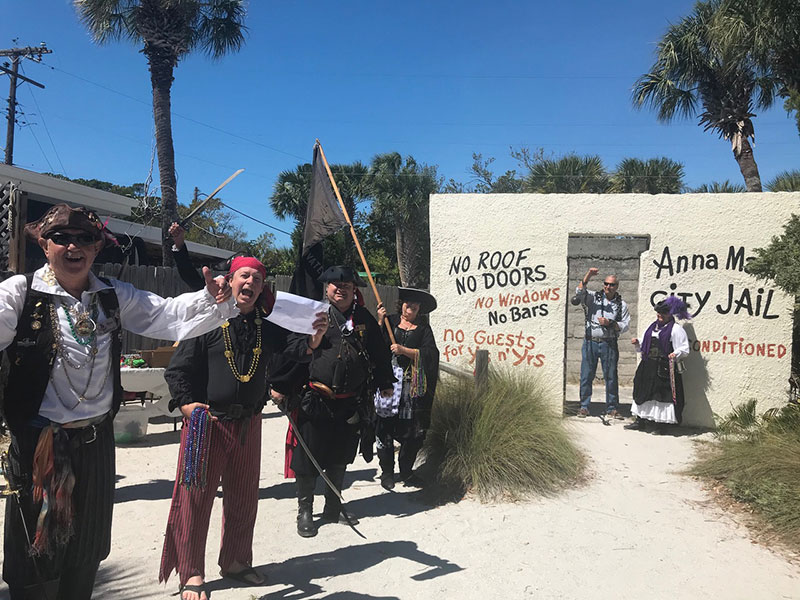 The Anna Maria Island Privateers are going for “gold” in 2021.

Since 1971, the nonprofit has raised money for kids and community and will continue to sail their route in 2021, while celebrating a “Golden Jubilee.”

The anniversary will begin with a “Conquest of the City of Anna Maria” at noon Saturday, Jan. 2.

An invitation on the group’s social media page describes the event as “a fun day on the island,” beginning at the Anna Maria City Pier and moving along Pine Avenue, South Bay Boulevard and Gulf Drive, with stops at businesses, restaurants, bars and the Anna Maria Island Historical Society Museum, 420 Pine Ave., Anna Maria.

Next on the calendar will be the first fundraiser of the year — set for 5 p.m. Friday, Jan. 8, when Bradenton Beach Mayor John Chappie will be “dragged from his office and shackled to the mast of the Privateers 60-foot pirate boat/float, Skullywag,” according to a Dec. 22 news release.

For Chappie’s release, the Privateers will demand a key to the city, a Letter of Marque — otherwise known as a proclamation when pirates and privateers sailed the seas — and ransom.

The ransom could pay for Chappie’s release or payments could encourage the krewe to keep him. In either case, the funds will go toward the group’s annual scholarship program.

During the event, the Anna Maria Island Chamber of Commerce will host a ribbon-cutting to recognize the group’s 50 years on the island.

Also, there will be a “ship-gate” party, with Champagne and food.

The nonprofit’s first recorded fundraiser was a mullet smoke, which sold out early and raised more than $2,000, veteran Privateer John “Barbarosa” Swager said Nov. 12 in a phone interview with The Islander.

Since then, the nonprofit has expanded its activities to include golf tournaments, captures and conquests, parades, children’s parties, galas and a series of winter Thieves Markets.

Another event in the yearlong celebration, Swager said, is a black-tie gala, possibly in November.

“A privateer was a pirate with papers. As the name suggests, privateers were private individuals commissioned by governments to carry out quasi-military activities,” according to www.britannica.com.

In other words, privateers were hired to go after the pirates who had stolen government-owned property. Usually on the high seas. And usually with extreme force.

What are the Anna Maria Island Privateers?

A 501c3 nonprofit organization, the Anna Maria Island Privateers raise funds for the betterment of the community.

According to lore, and their website, amiprivateers.memberlodge.org, the Privateers were founded by four men who wanted to serve the community by raising money to better youth.

The contest was conducted online with votes by supporters.

Swager made it as far as the quarterfinals.

Had he won, he hoped to raffle the bike as a fundraiser for the Anna Maria Island Privateers’ 50th anniversary, with the winner being announced at a gala event.