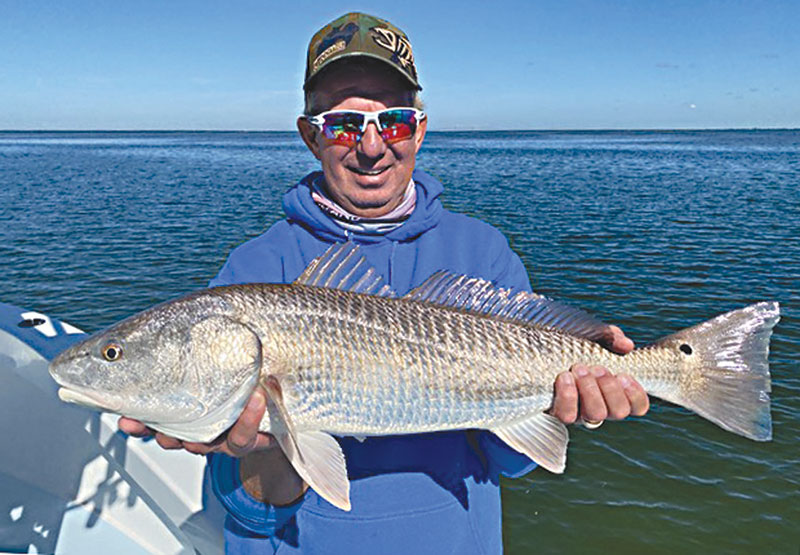 Hunter Paschal of Longwood shows off a beautiful redfish caught on a live shiner and released Dec. 19 on a charter fishing trip with Capt. David White of Anna Maria Charters.

When winter conditions are right around Anna Maria Island, the fishing follows suit.

Those opting to venture offshore are being rewarded with catches of red and gag grouper. Live pinfish or frozen sardines work well as bait for these species.

Using live shrimp while offshore also is attracting a bite — especially from hogfish and mangrove snapper. And for those looking for a real battle, amberjack are making quite a showing in the Gulf of Mexico. Live pinfish are working well to get these powerful fish to eat.

Moving in to nearshore structure, hogfish are the main attraction. Mixed in with the hogs are sheepshead, mangrove snapper, porgies and grunts.

For those who prefer to stay inshore — in the bays and Intracoastal Waterway — there’s action for you, too. Catch-and-release spotted seatrout are coming on around deeper grass flats. You also may find them in the mouths of canals and creeks, where the water temps are slightly warmer.

Speaking of canals, casting live shrimp around and under residential docks is yielding action on flounder, black drum, sheepshead and catch-and-release redfish. Rumors of pompano being spotted on the flats are floating around among the guides, so you may want to carry some jigs — just in case.

On my Southernaire charters, I’m finding plenty of action for my clients around the docks and canals. Catch-and-release redfish and spotted seatrout are being caught frequently using live shrimp for bait. Keeper species — sheepshead, flounder and black drum — also are responding nicely to the shrimp offerings.

Capt. David White is working inshore around residential docks and canals when he can’t run offshore, targeting a variety of species. Sheepshead and black drum are frequently being caught on live shrimp offerings. White says the same bite is occurring around artificial reefs and rock piles in southern Tampa Bay.

Fishing on the flats is producing action on pompano and catch-and-release spotted seatrout by casting small shrimp-tipped jigs.

Lastly, on warmer days during afternoon tides, White is finding a good catch-and-release snook bite for his clients. These illusive fish are being caught using live shiners as bait.

Jim Malfese at the Rod & Reel Pier says keeper sheepshead and black drum and catch-and-release redfish are the main catches this week. Malfese said fishing is slightly challenging due to the water in Tampa Bay being almost crystal clear. He compares it to looking into an aquarium. This scenario can be most entertaining, but the fish tend to get a little hesitant to eat your bait. Determination is key to getting a bite, according to Malfese. Live shrimp as bait is working the best for pier anglers.

Capt. Jason Stock is targeting gag grouper and experiencing some great fishing. Limits of gags are being caught by Stock’s clients while fishing offshore. Also red grouper are following suit, resulting in limits of them as well.

Bottom fishing offshore is providing action on hogfish and mangrove snapper, nice additions to the action.

Lastly, Stock notes that amberjack have shown up in great numbers, bending rods and resulting in sore arms for clients who meet the challenge.

Capt. Aaron Lowman is working nearshore structure while the winds are calm and the Gulf waters are navigable. In depths of 40 feet, Lowman is finding good numbers of gag grouper, as well as hogfish. Other species coming to the hook for his clients in these depths include mangrove snapper, Key West grunts, sheepshead and porgies.

On windier days, Lowman is hanging inshore and fishing the flats and residential canals.

On a conservation note, the Florida Fish and Wildlife Conservation Commission approved changes to the management of Florida’s flounder fishery during a December commission meeting.

Due to a decline in the fishery — likely caused by overfishing — the following changes will take effect March 1, 2021: