Cameron Donahue of Bradenton shows off the tasty hogfish he caught while on a charter fishing trip Dec. 13 with Capt. David White. “They are hands down, the best fish in our area to eat,” White said. “Probably in the top 5 on the planet!” Dave Doty of Noblesville, Indiana, shows off the tripletail he caught for dinner Dec. 12 on a live shrimp while on a charter with Capt. David White of Anna Maria Charters. 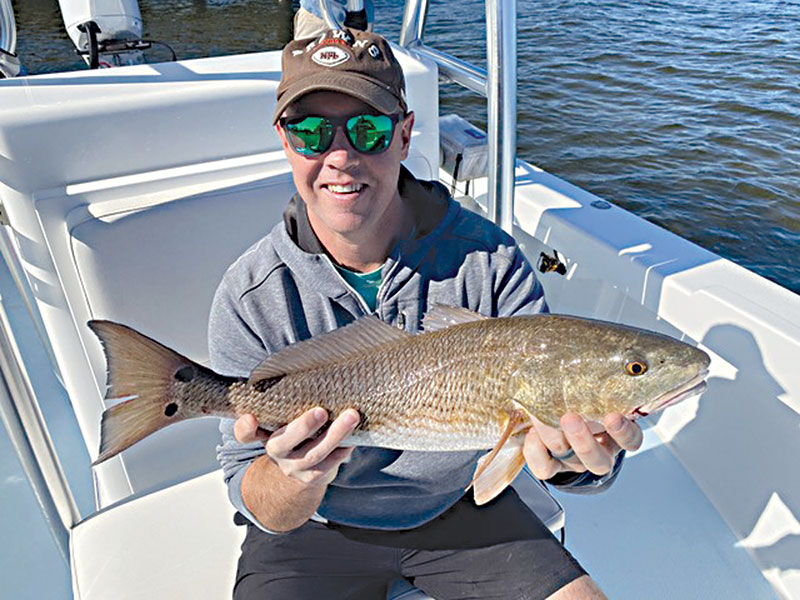 Brett Harper, visiting from Columbus, Ohio, shows off a redfish he caught and released Dec. 11 using a live pilchard as bait while on a guided fishing trip with Capt. David White of Anna Maria Charters.

Fishing around Anna Maria Island is shaping up nicely for the winter season.

Most of the inshore species we target are settling into their wintertime haunts and in good numbers, too.

Casting live shrimp around residential docks and in the canals is proving advantageous for catch-and-release redfish and spotted seatrout.

Other species — sheepshead, black drum and flounder — also are being cooperative in these wintertime sanctuaries.

Other inshore species tolerant of the cooler winter temperatures include pompano, bluefish, jack crevalle and ladyfish.

Try drifting over deep grass flats while casting soft plastics combined with a jig head to target these fish. This method can lead to some great catch-and-release action on spotted seatrout.

I tend to lean toward the DOA Cal jig as my choice for soft plastics. As far as colors go, you’ll have to experiment to see what the fish want on any particular day. As a rule of thumb, I tend to use darker colors if I’m fishing darker water and lighter colors in clear water.

If bay fishing isn’t your thing, you can venture out into the Gulf of Mexico. There are plenty of reefs, ledges and hard-bottom areas to be found within 10 miles of shore.

During the winter months, these areas can be quite productive.

What’s nice about this bite is every one of these fish is excellent once they are introduced to your favorite breading and a frying pan. If you’re looking to have a fish fry, these are the go-to fish. And most put up quite a fight on medium spinning gear.

On my Southernaire charters, I’m working in the backcountry in the canals and around docks. Casting live shrimp in these areas is yielding quite a variety of species, including black drum, sheepshead and flounder, as well as catch-and-release redfish and spotted seatrout. The sheepshead and flounder give my clients the option to take a few fish home for dinner. And the action on the catch-and-release reds and trout can be exciting as we are hooking up respectable numbers of both species.

Capt. David White is targeting inshore species at the north end of AMI in and around Tampa Bay. Catch-and-release snook and redfish are being caught frequently using live shiners as bait. This bite is occurring during the warmer days between the cold fronts. When the water is too cold to achieve a good snook bite, White is putting live shrimp on the hook to target black drum, sheepshead and flounder. The catch-and-release reds are available during the colder days, so White can target them, too.

Capt. Aaron Loman is fishing with his charters at the nearshore structure within 10 miles of shore. In depths of 40-50 feet, Lowman’s anglers are reeling up hogfish, mangrove snapper and plenty of Key West grunts. Also, while in these depths, Lowman is keeping his eyes peeled for floating debris, which can hold tripletail for the taking.

Moving closer to shore in the backcountry of Sarasota Bay, Lowman is finding good action using soft plastics combined with a jig head. Jigging over the grass flats is resulting in many catch-and-release spotted seatrout, as well as some ladyfish and jack crevalle for his clients. Casting live shrimp around rocks and docks also is working, especially for black drum and catch-and-release redfish.

Hamilton Brown at the Rod & Reel Pier says winter is coming on, as evidenced by the sheepshead gathering around the barnacle-encrusted pilings under the pier. Fishers using live shrimp as bait are hooking into and reeling up the zebra-striped fish with some consistency. And black drum are taking shrimp frequently as well.

There are still catch-and-release redfish being caught, although Brown warns that they are getting finicky. He advises anglers to be patient if they have their heart set on catching a R&R redfish.

Capt. Jason Stock is enjoying the light breezes and calm seas, enabling him to venture offshore on his full-day trips. Big mangrove snapper, blackfin tuna, kingfish and some mahi are being caught in the deeper Gulf waters. On the shorter trips, closer to shore, Stock is putting clients on gag grouper, hogfish, cobia and tripletail. With that list of species, the fishing speaks for itself.