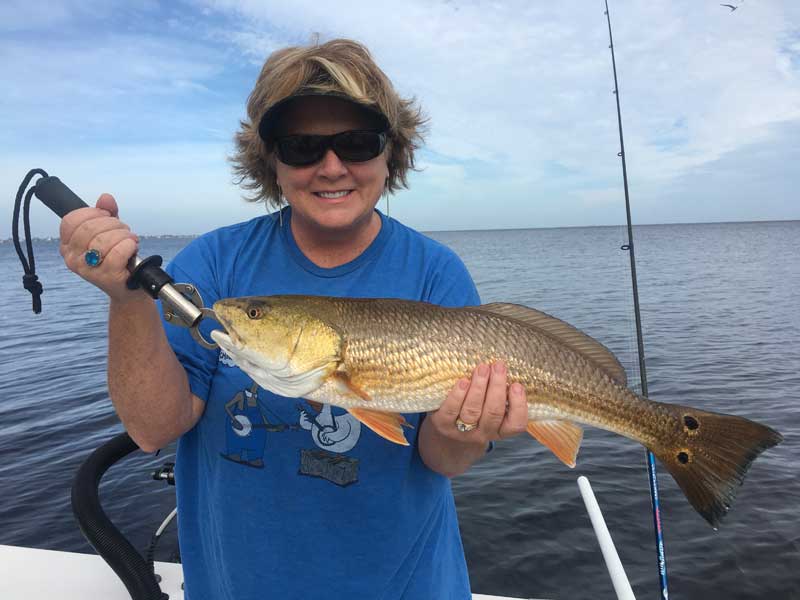 Carla Beardslee of Decatur, Alabama, shows off a 24-inch redfish she caught Oct. 7 on a charter trip with Capt. Danny Stasny of Southernaire Fishing. 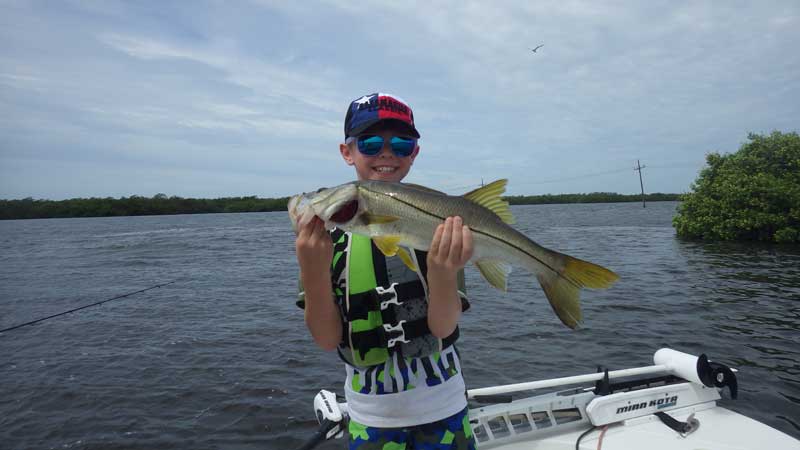 Brock Mason, 10, of Lakewood Ranch, shows off a nice snook he hooked on live bait inshore Oct. 7. Brock and his group of anglers were guided to the fish by Capt. Warren Girle. 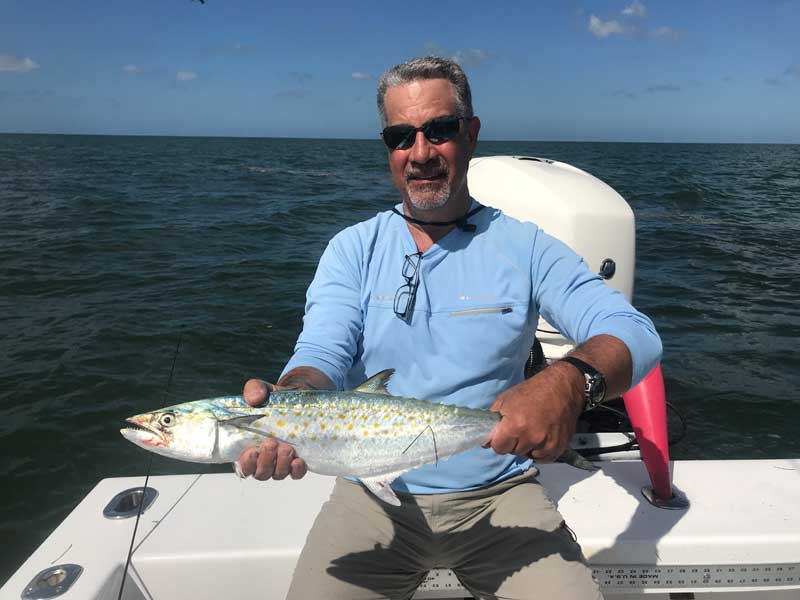 Fishing around Anna Maria Island is falling into the familiar autumn pattern, including the arrival of seasonal species.
Kingfish are making a showing along the beaches of Anna Maria Island, as well as the artificial reefs. Slow trolling large shiners or threadfin herring on a light wire rig is producing a bite.

Numerous Spanish mackerel are showing off the beaches, where anchoring and chumming live shiners is key to firing up these speedy fish.

Moving to the flats, we are seeing large schools of redfish moving in. I’m seeing these schools “pop up,” as I run the outer bars during low tides. It’s smart to carry a couple of gold spoons for the approach on schools of reds, as they can sometimes be spooky and unapproachable. The gold spoon is heavy enough to enable the angler to make long casts, which comes in handy when you can’t get the boat close to the fish.

On one of my recent Southernaire charters, I was joined by Geno Lynn of Bradenton and his friends Jim and Carla Beardslee of Decatur, Alabama. We had a great morning on snook, trout and redfish — the morning of the king tide and the full moon.

The morning started slow but, as that flood tide came in, we were able to fish close to the mangrove shoreline. Within minutes of setting the anchor, we had bent rods.

At first, the snook were keeping us busy. We even had times when all three anglers were hooked up at once.

After a good dose of snook, we started hooking up redfish, one after another. The biggest red — a 24-incher — kept Carla busy for a good five minutes before she reeled the fish to my net.

After the wave of redfish, the bite calmed slightly, although we still managed to catch more snook and reds. And we even started getting some nice keeper-sized trout. Needless to say, Geno, Jim and Carla were thrilled with the bite they experienced. They also got some bragging rights, as all three recorded an “inshore slam” — snook, redfish and trout.

Jim Malfese at the Rod & Reel Pier is seeing black drum, redfish, flounder and a few sheepshead coming to the deck this week. All of these species are being taken using live shrimp as bait. Snook are being caught by anglers using live shiners and pinfish. Lastly, Spanish mackerel, jack crevalle and ladyfish are accommodating pier fishers on either live shrimp or artificial lures, such as jigs or spoons.

Capt. Aaron Lowman is working the flats of Tampa Bay, where the king tide brought swift moving water around the edges of grass flats, mangrove shorelines and oyster bars. As a result, these areas are great staging points for snook and redfish to feed. With this in mind, Lowman is targeting these areas with live free-lined shiners. Snook up to 30 inches are the result, as well as slot and over-slot redfish.

Fishing the deeper flats during these swift tides is producing good numbers of spotted seatrout for Lowman’s clients, as well as jack crevalle and macks.

Capt. David White of Anna Maria Charters is patrolling the beaches of Anna Maria Island in search of migratory species — Spanish and king mackerel. Both species are being found within a couple of miles of shore. For the macks, a live shiner on a long shank hook is producing a bite. As for the kings, large live shiners or small blue runners are the baits of choice. Slow trolling these baits is producing good action on the kings, while anchoring and chumming is working well for the macks.

On the flats, White is targeting redfish and schoolie-sized snook. Both are being taken during morning outgoing tides, when live shiners free-lined over the flats are producing this bite.

Capt. Jason Stock is running charters nearshore along the beaches of Anna Maria Island and Longboat Key. Fishing around artificial reefs and wrecks is producing good action on Spanish and king mackerel as well as barracuda. Slow-trolling live threadfin herring or live shiners is attracting kingfish in the 30-inch range to the hook. For the macks, small live shiners free-lined around the structure is proving prosperous. As for the barracuda, most of these thieves are being taken as they chase down the mackerel that are being reeled in by the clients. Lastly, free-lining live crabs around structure is producing some permit action for Stock’s charters.

The key to getting the bite going is chumming, according to Girle. Tossing handfuls of dead bait into the water and letting them sink to the reef is getting the snapper to school up, which is producing limits of fish in the box. While chumming, macks and kingfish are being attracted to the boat, which adds a nice variety to the bite.

Moving inshore, Girle is putting clients on numerous redfish and snook with ladyfish as bait. Casting a hook with fresh-cut chunks in areas where these fish are lurking is resulting in slot-sizes of both species.