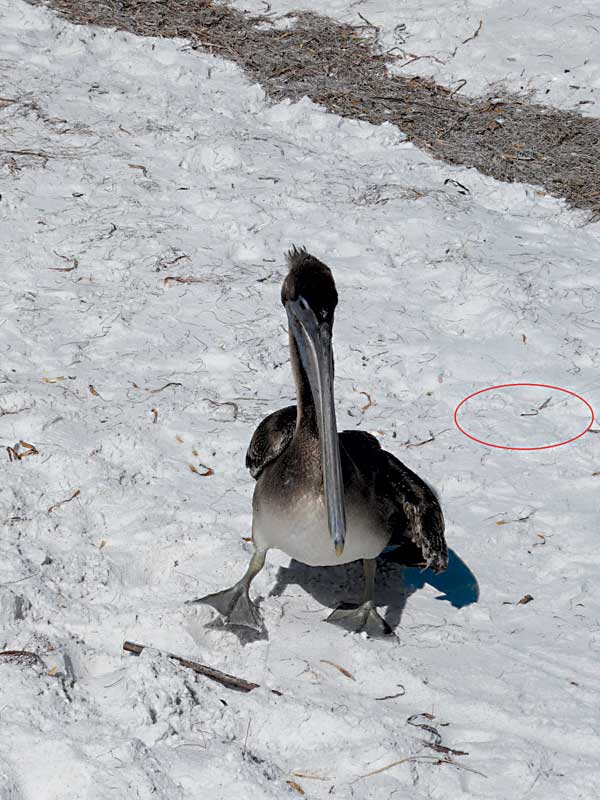 A pelican at the Rod & Reel Pier that was entangled in fishing line and hooks. Islander Courtesy Photo

My wife and I spent another fantastic two weeks on Anna Maria Island relaxing and taking in the healing warmth from the sun. You really have such a special island that will forever live in our hearts.

However, I think the area around the Rod & Reel Pier in Anna Maria needs to be managed better with regard to the birds and wildlife.

While dining at the Rod & Reel on several occasions, I witnessed a couple of distressing scenes with the birds.

One involved a youngster who seemed hell bent on scaring every bird away with his fishing rod when the birds got too near to him. If he had hit one of the birds with his rod, he would have injured it. He also handled any caught fish in a very rough way.

However, my main cause for concern is for fishing line and hooks. On one occasion, we stood at the land’s end of the pier as a pelican came up the beach. I thought: How cute, as the bird looked at me, but on closer inspection I saw fishing line wrapped around the pelican’s wings and it was dragging more line and hooks up the beach.

The bird was looking for help from me, I now believe. We tried to get help from someone on the pier, who told us at the time he was more concerned with the pelican behind us.

When turned to see a pelican hanging upside down from a boat mooring with line around its wings and feet, with its head underwater. The bird managed to break free but flew off with the line and hooks in trail and blood coming from its wounds.

Not nice to witness.

Going back to the other bird, I grabbed the pelican’s bill and unwound most of the line, but could not remove the hooks.

A fisherman on his way home stopped and used his scissors to remove the rest of the line and hooks.

The bird scuttled off down the beach but did not fly.

I went back to the beach and collected yards of line, which was tangled around the piers posts.

I feel that on the pier, humans come before the birds. The area should be more closely monitored, with a daily inspection for hooks and line.