Bob McCaffery wants the city to clean up Spring Lake, a saltwater lake fed by underground pipes that connect to the canals across Palm and Marina drives. Islander Photo: Terry O’Connor 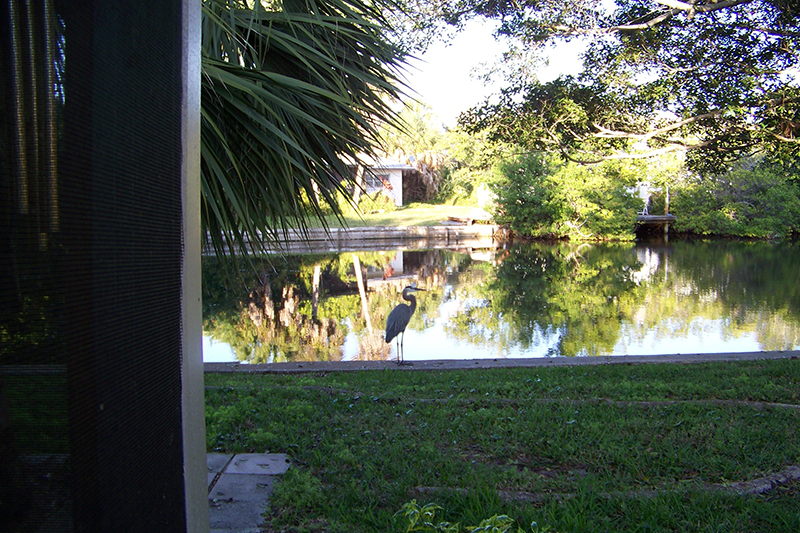 Dick Suman shows off a 37-pound grouper caught by his wife, Thelma, July 4, 1976, from the patio of their home on Spring Lake in Holmes Beach. The Suman’s home eventually became a pocket park, accessible from Holmes Boulevard. Islander Courtesy Photo

Holmes Beach residents say they used to be able to see the bottom of Spring Lake.

Now, they see only their own muddy reflections in a layer of scum on the surface.

In late October 2015, about 22,000 gallons of sewage flowed from a broken Manatee County sewer force main into Spring Lake near the intersection of Clark and Palm drives in Holmes Beach.

Hundreds of crabs and fish perished.

The lake, fed by tidal flow in underground pipes connected to canals on Marina Drive, was closed while the Holmes Beach police and public works departments, Manatee County Public Works Department and the Florida Fish & Wildlife Conservation Commission investigated the spill and what killed the marine life.

The spill came from a ruptured sewer force main, according to a Manatee County report to the Florida Department of Environmental Protection. A storm drain structure placed atop the force main proved too weighty and crushed it.

State, county and Holmes Beach investigators cleared Spring Lake for public use less than two weeks after it was shocked by the waste dump.

Amy Pilson, public affairs liaison to Manatee County Utilities, told The Islander in 2015 the fish kill could be unrelated to the spilled sewage.

Pilson said dead fish first were reported in the lake Oct. 26, 2015, two days before the Oct. 28, 2015, sewage dump. With the spill coming so close to the reported fish kill, Pilson said the cause of the kill would be hard to pinpoint.

To remediate the afflicted lake, county personnel removed fish carcasses, vacuumed as much wastewater as possible and repaired the force main.

Water tests showed lake contaminants within “normal range” by Nov. 5, 2015, which prompted the county to close its investigation.

“The county dumped the restoration on the city and the city has done nothing about it,” McCaffrey said.

“We’ve been using our money and stormwater money,” the mayor said. “That has been worked on since the incident.”

“That pipe was a bloody mess,” Johnson said. “It wasn’t really functioning well at all.”

The city re-sleeved the connector and added an estimated $111,000 worth of WaStop valves, which prevent backflow, flooding and sewage odor in pipes.

“That lake has been cleaning itself for more than a year,” Johnson said.

“Manatee County followed all appropriate procedures and testing,” she emailed The Islander. “Any pollution, especially visible pollution, would not be as a result of an event that occurred (in 2015), but is most likely from another source.”

Spring Lake is clearly fouled, McCaffrey said. The brown water is unappealing at best, he said.

“There are some fish now,” he said. “Used to be a lot of ducks and birds. That’s dwindled down, too. I haven’t seen a great blue heron in quite awhile.”

McCaffrey, who has lived on the lake 28 years, wants it restocked with fish — after it’s cleaned.

“I’d just like them to put it back the way it was,” he said. “Every now and then it gets on my nerves, thinking what Spring Lake could be.”

One thought on “Spring Lake may be polluted, but source is unknown”