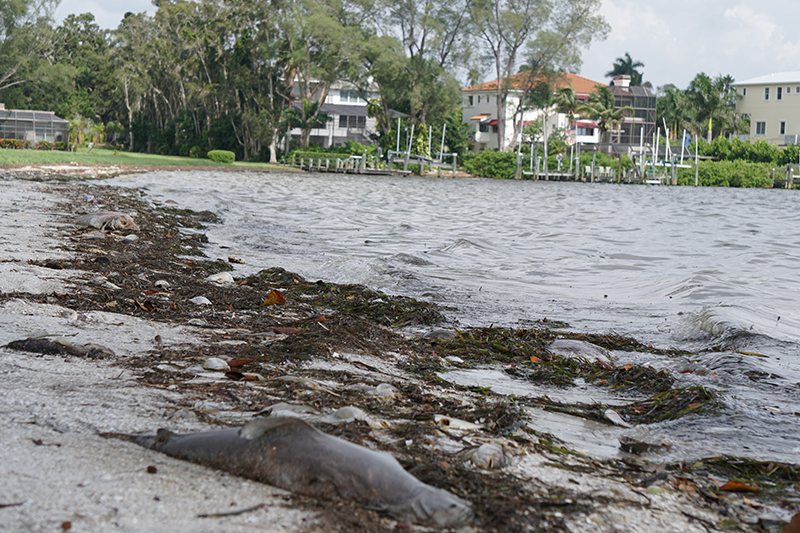 Palma Sola Bay was slammed by red tide less than a week after the Florida Department of Health lifted a “no-swim” advisory warning for the beach.

The state health department lifted a “no-swim” warning Aug. 8 that was issued in late July due to elevated bacteria levels on the Palma Sola Causeway.

And a sign on the south side of the Manatee Avenue West at 81st Street that advised beachgoers to stay out of the water morphed to a “no advisory” sign.

“This beach is monitored as part of the healthy beaches program. No water quality advisory at this time,” stated the sign atop a 10-foot pole, behind a construction trailer near the beach littered with dead fish, rays, sea snakes, crabs and sharks.

The FWC tests the bay periodically, with the most recent test Aug. 6, according to Veach.

“It’s one of those situations that doesn’t seem to make any sense,” said Tom Iovino, communications director for the health department in Manatee County, referring to the lack of a health advisory — and a sign that says as much — now that red tide has hit the location.

Iovino said the no-swim advisory was rescinded after the Aug. 6 testing.

The health department tests only for enterococci bacteria levels, which measure fecal matter in the water, and that’s gone, he said.

According to the FDH website, Aug. 6 testing showed 35.4 CFU enterococci per 100 milliliters.

Red tide is another issue.

Should people go to into the water?

According to Iovino, the answer from the health department is: “Swim It. Shore It. Dodge It.”

When people and beaches are healthy, swimmers should swim with a buddy. With an open cut, people should stay on shore.

“Dodge It” would be applicable to algae blooms, he said.

Suncoast Waterkeeper’s Andy Mele called the message, considering the pile up of dead marine life on the beach the second week in August, “lame.”

The bacteria from the rotting marine life can cause life threatening infections and criticized the multiple agencies’ “profound disconnect” between what is on the beaches and the government report.

“If you go swimming and get one drop of it in your mouth, there are risks,” Mele said.

Mele also is part of a watchdog group, Friends of Palma Sola Bay, which organized in July to hold public officials accountable for the health of the bay.