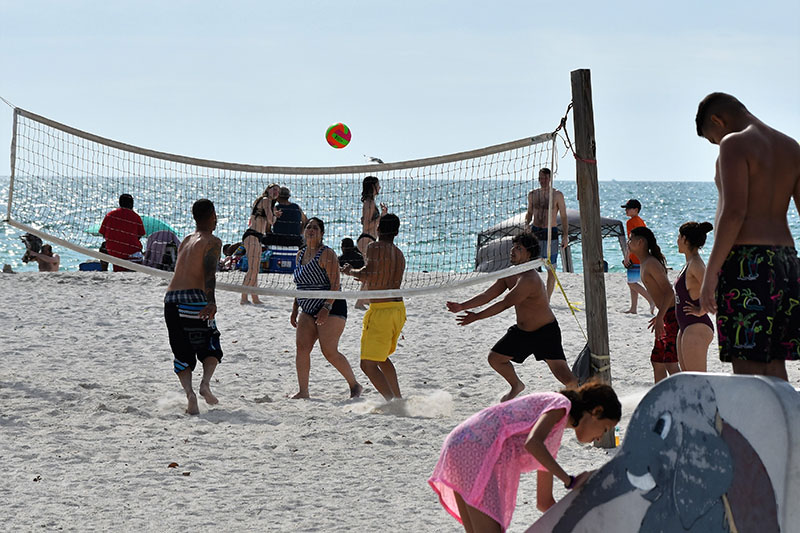 Teenagers play a game of pickup volleyball while parents attend children at play on the elephant slide March 31 at the Manatee Public Beach in Holmes Beach. The weekend weather was chamber-of-commerce perfect for a day at the beach. Islander Photo: Sandy Ambrogi

The season-ending playoffs in the adult indoor volleyball league at the Center of Anna Maria Island kicked off March 26 in the center gym with a quarterfinal match between Ace Hardware and Freckled Fin.

Ace took the first game by a 25-21 score, but Fin bounced back in the second game to edge Ace 25-23, forcing a third game that saw Ace jump to an early lead and a 15-8 victory to advance to the semifinals.

The championship match was closer, but Solid Rock earned a solid 25-18, 25-16 victory over Planet Stone to take the championship.

The Key Royale Club President’s Cup tournament for men took place March 27 at the club in Holmes Beach and Dick Mills came out on top by firing a 3-under-par 29, edging Jerry Elson for the top spot by one stroke. Ron Buck, Jack Lowry and Gary Risner finished in a tie for third place with matching 1-under-par 31s.

Regular golf action got started for the week with the men playing a nine-hole modified-Stableford system match March 25.

Tom Solosky won individual honors with a score of plus-5, a point ahead of second-place finisher Greg Shorten who finished at plus-4.

The team of Bill Ford, Bill Koche, Mike Lovell and Jack Lowry combined on a plus-4 to win the team competition.

The women were on the course March 26 for a nine-hole, individual low-net match in four flights.

Pam Lowry fired an even-par 32 to grab first place in Flight A by one stroke over Phyllis Roe and Helen Pollock, who finished in a tie for second.

Flight B was won by Sue Christenson, who carded an even-par 32 to earn a one-stroke victory over Carol Patterson. Meredith Slavin was alone in third with 6-over-par 38.

Roxane Koche fired a 5-under-par 27 for the low-net round of the day and first place in Flight C. Barb Rincky was a stroke back in second place, while Fran Barford had a pair of chip-ins on the fourth and eighth holes on the way to a 3-under-par 29 third-place finish.

Jan Jump and Terry Westby finished in a tie for first place in Flight D with matching 2-under-par 30s. Marty Clark was alone in third with an even-par 32.

The men were back on the course March 28 for a nine-hole scramble that saw the team of Bob Kramer, Bill MacMillan, Doug Michaels and Chuck Patrick match the 4-under-par 28 carded by Bill Brodie, Dale Hudson, Diane Miller and Marie Taddeo to tie for first place. No report on who bought the post-match drinks in the clubhouse.

Two teams squared off for the day’s bragging rights after emerging from pool play during March 27 horseshoe action at the Anna Maria City Hall horseshoe pits.

Tom Skoloda, AKA Captain Comeback, staged his comeback in final pool play and then pulled the same trick in the finals. Trailing 18-0, Skoloda stunned the team of Dave Long and Del Reese with a 21-point scoring run to earn the day’s bragging rights with a 21-18 victory.

The March 30 games saw Tom Farrington and Myles Macleod team up and finish as outright champs after posting the lone undefeated record in pool play.

Young soccer enthusiasts hoping to take their game to the next level are encouraged to try out for the Manatee Magic competitive soccer teams.

Tryouts will be held in age groups for boys and girls teams at G.T. Bray Park, 5502 33rd Ave. Drive W., Bradenton. There is no charge to tryout. The player fee for the season, if selected, is $550.

To register for the tryouts or learn more about Manatee Magic and the Manatee Area Youth Soccer Organization, go online to mayso.org.

Tryout dates, based on team and birth years, are as follows: