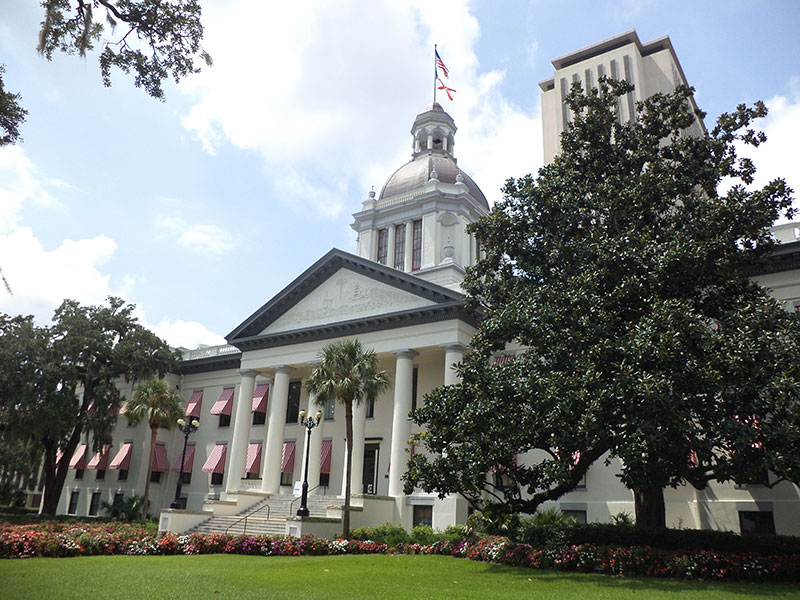 "The Old Capitol,", built in 1845, was threatened with demolition in the late 1970s when the new capitol building was built. Having been restored to its 1902-version in 1982, the Historic Capitol is directly behind the new Capitol tower. Islander File Photo: Bonner Joy

The right for local governments to regulate is on the line in Tallahassee.

“Another week, more movement” was how Florida League of Cities lobbyist Casey Cook begrudgingly began a Feb. 3 summary of vacation rental bills being considered in the legislative session.

Regulations adopted before 2011 would be grandfathered. However, many cities, including Anna Maria, Bradenton Beach and Holmes Beach, adopted vacation rental regulations after 2011.

HB 1011 was approved 8-5 Feb. 4 by the government operations and technology appropriations subcommittee, after being ruled favorable 10-5 Jan. 21 by the workforce development and tourism subcommittee.

SB 1128, the companion to HB 1011, was approved 8-2 by the innovation, industry and technology subcommittee. As of Feb. 6, it was pending consideration by the commerce and tourism subcommittee, which is chaired by Sen. Joe Gruters, R-Sarasota.

Cook said he anticipated the bill would be up for a vote Feb. 11, after press time for The Islander. He said Florida League of Cities’ legislative action days would be Feb. 11-12 in Tallahassee and he urged people to arrive in time to attend the subcommittee hearing.

Action days provide people an opportunity to speak with legislators.

“We need to have our members in the room talking about some of the issues that you’re having and why we think local solutions are the best option here,” Cook said.

SB 1766 would require any settlement reached on a Bert J. Harris Private Property Rights Protection Act claim that involves the issuance of a variance or exception to a regulation be applied across the board to all “similarly situated residential properties.”

The Bert Harris Act allows demands for compensation due to government regulations that diminish the value of private property.

According to a report given Feb. 3 by league lobbyist David Cruz, the bill also would allow for business damages to be incorporated into Bert Harris claims and would prevent local governments from recovering legal fees, even if they prevail.

“We have a whole host of concerns with this,” Cruz said. “This is a priority issue for the league.”

The bill was approved 6-0 Feb. 4 by the judiciary subcommittee.

Bills being considered this session and information to connect with legislative committee members can be tracked online at www.flsenate.gov and myfloridahouse.gov.

The session is scheduled to end March 13.

Florida legislators can be contacted via phone, email, regular mail or in person.

Senate President Bill Galvano, R-Bradenton, can be reached at 941-741-3401. His Bradenton office is at 1023 Manatee Ave. W. He can be emailed at galvano.bill@flsenate.gov.

Sen. Joe Gruters, R-Sarasota, can be reached at 941-378-6309. His Sarasota office address is 381 Interstate Blvd. He can be emailed at gruters.joe@flsenate.gov.

State Rep. Will Robinson, R-Bradenton, can be reached at 941-708-4968. His office address is 717 Manatee Ave. W., Bradenton. He can be emailed at william.robinson@myfloridahouse.gov.

The Bradenton Beach City Commission voted 5-0 Feb. 6 to renew a contract with the Tallahassee-based Ramba Consulting Group for the services of lobbyists David Ramba and Thomas Hobbs.

Ramba and Hobbs have lobbied state lawmakers since the firm was hired in 2017. The pair helped earn $3,194,248 in state appropriations for the city last year, including $500,000 for seagrass mitigation and $2,694,248 for a flood prevention program.