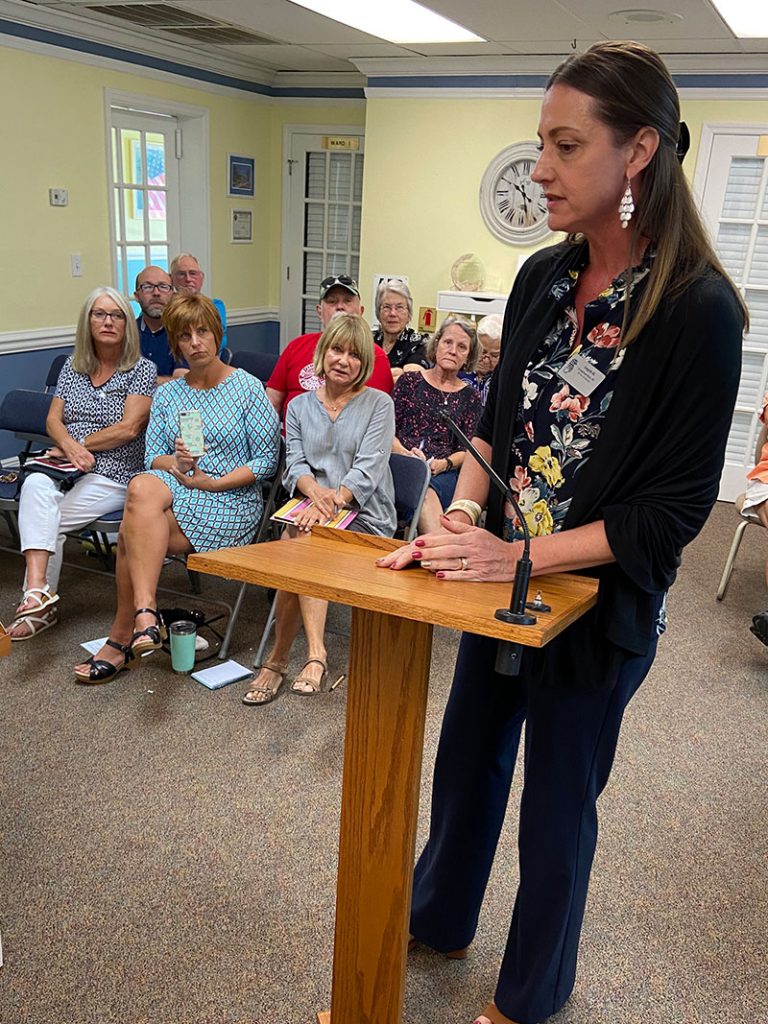 Angela Rodocker of BridgeWalk Resort on Bridge Street speaks March 4 in favor of a proposed service to shuttle people between the commercial district and Coquina Beach for parking. Islander Photo: Ryan Paice

Plans are accelerating for a shuttle to transport people from Coquina Beach to Bridge Street in Bradenton Beach.

The motion directs Burnett to reconfigure parking along Cortez Beach to accommodate the pathway, which would stretch alongside Gulf Drive from Coquina Beach to Fifth Street South, then along Bay Drive South to Bridge Street, and to the Bradenton Beach Marina.

The current head-in/back-out parking perpendicular to Gulf Drive would be angled so a southbound driver would pull off State Road 789 and back into a spot.

Burnett said a back-in/head-out reconfiguration would create room for the tram and improve safety, as drivers would not back out Gulf Drive.

CRA members reached consensus to move forward with the proposed parking if Manatee County and the Florida Department of Transportation approve.

The motion also directed Spooner, Perry and Burnett to plan signage, as well as produce a parking count to ensure there wouldn’t be a loss in spaces.

CRA members allocated $10,000 to create the plan for the path and reconfigured parking.

Perry said they should prepare a request for proposals to operate the tram service because the Bradenton Beach Area Merchants is overwhelmed with the project and can’t operate the service.

The CRA came to a tentative agreement with BBAM in February to work together to create a pilot program using shuttles owned by BBAM businesses. However, Perry said that after talking with BBAM members, the group is still willing to contribute financially, but couldn’t organize the shuttle’s operation.

CRA members voted 4-1 to direct Perry to prepare such an RFP.

Perry said it could take 30 days to prepare the RFP and another 30 to collect bids.

Mayor John Chappie, a CRA member, said he had hoped to pilot a program by July, but the tram might not roll until September.

The reception from nearby residents to the CRA’s plans has been mixed.

Resident Terry Gebhardt said a tram would be redundant, copying a service provided now by Manatee County Area Transit trolleys. Also, she said the tram would worsen traffic on Fifth. She recommended promoting use of the trolley instead of creating a tram service.

Gebhardt added that taking parking away from the beaches to benefit Bridge Street business owners would be “offensive.”

Resident Ellen Smith said she opposes the tram service because it would negatively impact the quality of life along Fifth by creating more traffic.

Resident Christel Lewis asked CRA members why Fifth Street South was chosen as a part of the route since it is a residential street. She said establishing a lane of traffic on Fifth would inspire other motorists to follow down the street.

Angela Rodocker, owner of the BridgeWalk Resort and a BBAM member, spoke in support of the tram service.

Rodocker said the business district can’t handle the number of people who visit the area and the tram is necessary to address traffic and parking challenges. She said several BBAM members, including herself, Mike Bazzy of Bradenton Beach Marina and Sherman Baldwin of Paradise Boat Tours, would financially participate with the CRA to launch the pilot program.

“This train left the station a long, long time ago,” Rodocker said of the shuttle.

Perry said she wanted to address residents’ misconceptions, including that the project would take parking from the beaches or that creating a tram path would lead to others using the path.

Perry said the reconfigured parking would more efficiently use parking space and might result in additional parking spaces for the beaches.

Also, she said the city adopted an ordinance requiring a license with the city to drive along the path, so the number of people using the path would be limited.