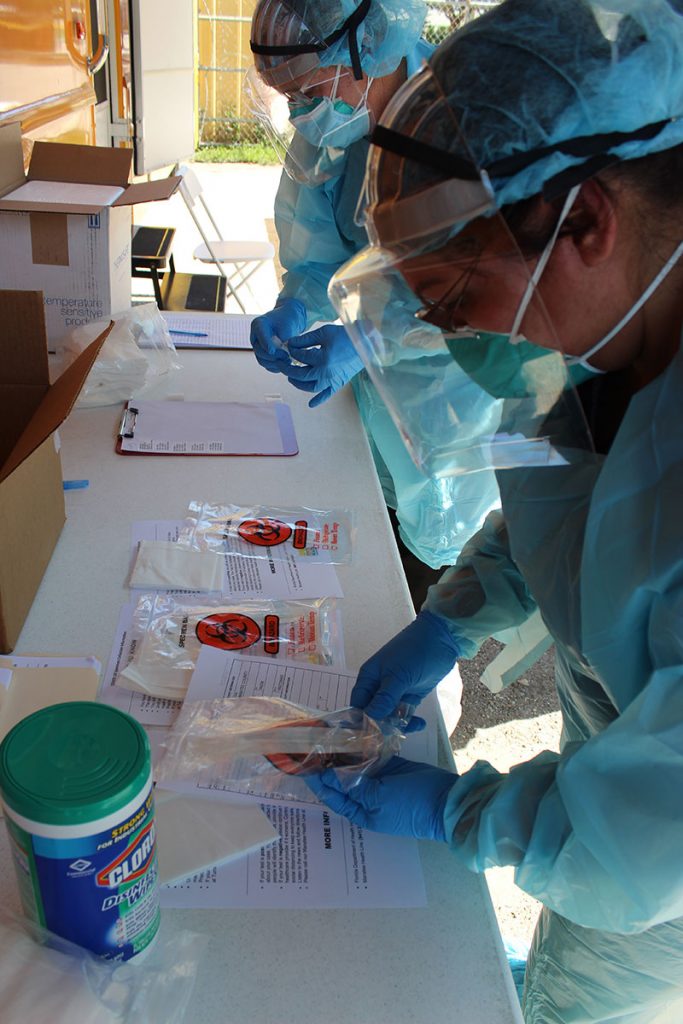 It’s not over yet.

The percentage of positive numbers dropped, but cases still were being confirmed daily in Manatee County as of May 17.

“The effects of the pandemic continue to rise,” Jake Saur, the county’s public safety director, said May 12 during a teleconferenced county commission meeting.

He continued, “That being said, fatalities and the percent of the population testing positive, both Manatee County and the statewide average, is finally trending downward, while the number of new positive cases are trending slightly upward.”

As of May 17, the rate of positive COVID-19 cases in Manatee County was 8.5% of 9,964 people tested, according to statistics from the Florida Department of Health.

The rate decreased by more than 5% in one week due to increased tested through the second week of May.

Residents and staff of long-term care facilities accounted for 52 deaths, totaling 64% of fatalities in Manatee County related to the novel coronavirus.

State-initiated incident management teams were assisting facilities the weeks of May 4 and May 11 with infectious disease control, according to Saur.

He said the short-term goal was to test another 2% of the population, about 16,400 people, by mid-June.

The week of May 11, the health department conducted walk-up testing at Turning Points, a homeless facility in downtown Bradenton, and was encouraging the underserved population to get tested.

Saur said the health department also started assisting management teams by conducting mobile testing on a bus that traveled to long-term care facilities and was training paramedics to swab so they could test people that could not drive to a test site.

At a positive percentage rate of 9.3%, Saur said the county had dropped below 10%, the state’s target rate for reopening established by the Florida Department of Health.

However, Saur noted some delays in state-reported test results.

“Until the data proves otherwise,” Saur said, it is likely that we will see peaks and valleys, as have occurred in recent weeks.”

Manatee County is encouraging people, with or without virus symptoms, to get tested for COVID-19.

The health department plans to hold drive-thru testing 9 a.m.-3 p.m. Friday, May 29, at the Bradenton Area Convention Center, 1 Haben Blvd., Palmetto. A prescription is not required, but people must make an appointment and present a photo ID, as well as proof of residency, such as a utility bill. Appointments are available by calling 941-748-0747.

Testing at the state and DOH sites was provided to Manatee County residents at no cost.

Also, people now can be tested for antibodies, indicating they likely were infected and recovered.

The Manatee County Health Department issued a statement May 13 urging people to wear cloth face coverings to prevent the spread of COVID-19, the disease caused by the new coronavirus.

The U.S. Centers for Disease Control and Prevention has posted guidance on cloth face coverings to www.cdc.gov and recommends “wearing cloth face coverings in public settings where other social distancing measures are difficult to maintain … especially in areas of significant community-based transmission.”

The CDC also advises that “cloth face coverings fashioned from household items or made at home from common materials at low cost can be used as an additional, voluntary public health measure.”

Also, the CDC and the health department urge people to remain at home as much as possible and practice physical distancing, remaining 6 feet away from others to help prevent spread of COVID-19.