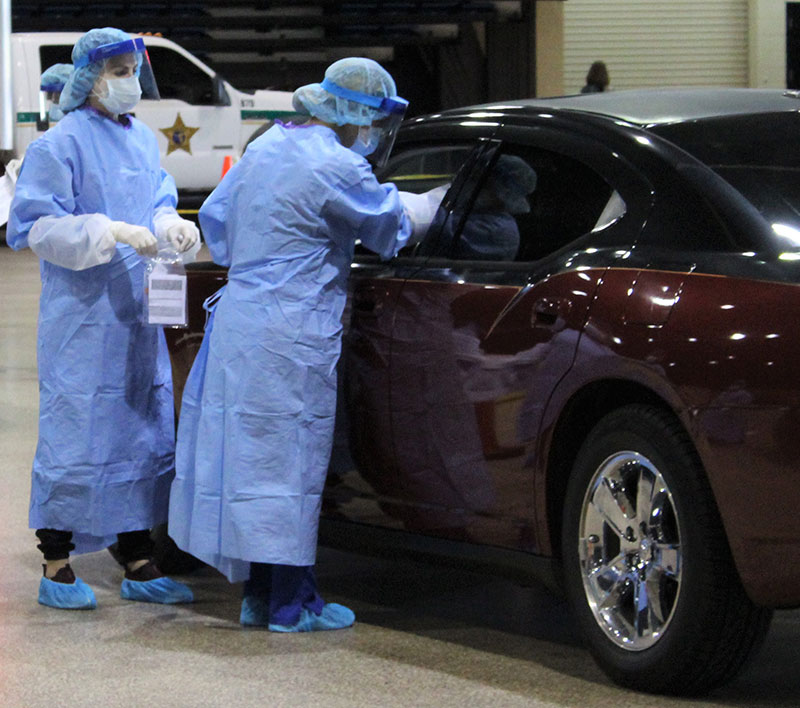 DOH workers collect a specimen from a motorist May 6 at a drive-thru COVID-19 test site at the Bradenton Area Convention Center in Palmetto. Islander Photo: Courtesy FDOH Manatee County 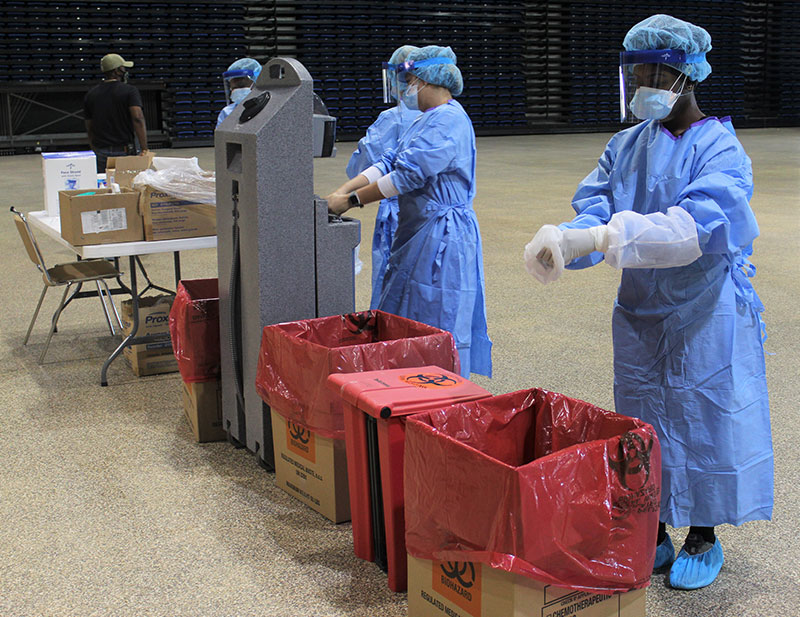 The curve is flattening.

It took longer than much of the rest of the state but, as of May 10, the rate of positive COVID-19 cases in Manatee County dropped to 10% of 7,729 people tested, according to statistics from the Florida Department of Health.

The rate decreased by more than 4% in five days when the county increased testing at the end of April.

About 0.5% of the population had been tested as of April 21.

County administrator Cheri Coryea told commissioners that the state’s goal to relax social distancing measures for each county was to drop the percentage of positive cases below 13%.

The county’s positive percentage rate lingered at 14.5% May 4, the day it started reopening public beaches, restaurants and retail at 25% capacity, following the implementation of phase 1 of the state’s three-phase reopening plan.

With increased funding and state support, county staff worked with the Florida Department of Health Manatee and Manatee County Rural Health to test more than 3,000 people May 1-8.

Saur reported May 5 to commissioners that the trend of positive cases appeared to be slanting downward.

“It will be key to pay attention over the coming weeks to see if this is a trend or an aberration in data as a result of reporting lags and data dumps from the state,” he said.

As of May 10, 772 residents and four non-Florida residents tested positive in the county.

Residents were identified by a Florida ID. Nonresidents were visitors with out-of-state identification who tested positive while visiting the state.

Saur also said May 5 that more than 441 people who tested positive had recovered.

A state-run regional testing site for Manatee and Sarasota counties was open seven days a week 9 a.m.-5 p.m., at the Mall at University Town Center in east Manatee County until further notice. No prescriptions or appointments were required.

The health department also held its third round of drive-thru testing at the Bradenton Area Convention Center in Palmetto 9 a.m.-3 p.m. May 6-8, and added testing dates for May 11, May 15 and May 29.

A prescription was not required, but people had to make an appointment and present a photo ID with the name matching the appointment, as well as proof of residency, such as a utility bill.

MCR Health also held drive-thru testing at four sites in the county May 2 and tested more than 1,665 residents, according to Saur’s report.

As of May 10, 46 of 74 deaths occurred among residents or staff of long-term care facilities and 205 positive cases, totaling 26.5%, were staff or residents of LTCFs.

Commissioner Vanessa Baugh said May 5 that certain ZIP codes had significantly higher positive numbers and asked Saur if that was due to LTCFs in those areas.

Saur said “yes,” and the state regional incident management teams continued to work with the facility “hot spots” with the higher numbers of positive cases.

Coryea added that when people are tested, the results initially show up for the ZIP code in which they were tested, and are later changed to the ZIP code where they reside, following contact tracing and updated reporting.