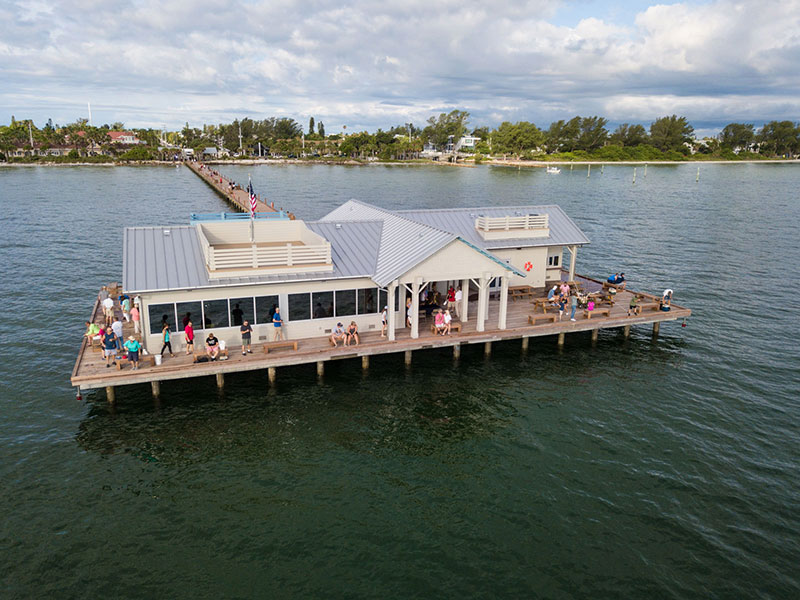 Another view Looking northeast from the Anna Maria City Pier across the treetops in Anna Maria, the first visitors to the new city pier on June 19 walk, talk, tour and fish. Islander Photo: Jack Elka

Following nearly two years of construction, the city opened the pier June 19 to sightseers and anglers.

The city also reached a settlement with the former restaurant and bait shop tenant.

The new pier was built to replace the old pier, which opened in 1911 but was removed by the city after it was deemed destroyed by Hurricane Irma in September 2017.

At their June 25 meeting, commissioners unanimously approved a motion banning smoking on the pier, including the covered entrance and T-end.

Murphy said “no smoking” signs would be posted on the pier. He also said signage would be placed at the pier entrance stating dogs, excluding service animals, and bicycles are not allowed, per city ordinance.

He suggested, with help from the Anna Maria Historical Society, the city could place pictures of the old pier on the bulletin board at the entrance and photos of historic island scenes in restrooms.

Additionally, he said the city is considering placing a shade sail at the T-end.

Previously, Murphy said the city hopes to have the restaurant and bait shop open in late 2020 or early 2021, with the new tenant or the city taking on the build-out of the operations.

The city commission voted in May to approve the bid from the Ugly Grouper restaurant, 5704 Marina Drive, Holmes Beach, and the mayor has been negotiating the terms with the owners.

In the meantime, city attorney Becky Vose worked out a settlement with the former tenant, Mario Schoenfelder, whose lease was set to expire Dec. 15.

Schoenfelder’s lease and payments have been abated since the September 2017 closure.

Vose reported June 25 that a settlement was reached and the city will pay Schoenfelder $20,000 to end the lease.

“Once it is approved, the city will have full use of the pier and the lease will be over,” Vose said.

Commissioners unanimously approved a motion to accept the settlement.

Murphy did not provide an update June 25 on negotiations with the Ugly Grouper, but previously said fact-finding with restaurant co-owner Mike Ross was underway, and he anticipated Ross would present a proposal to commissioners at the end of June or July.

At the start of the June 25 meeting, Murphy said he was upset by allegations of a possible Government-in-the-Sunshine Law violation in The Islander’s June 24 editorial, following the June 19 pier opening, when the mayor and Commissioners Carol Carter and Amy Tripp met at the T-end of the pier prior to the public being admitted for more than 15 minutes.

A notice that two or more officials might be gathered on the pier over opening weekend was posted on the bulletin board a city hall, but was not distributed to the media or the city website.

The notice does not give officials carte blanche to hold a discussion without allowing the public to be present or without a recording of the meeting.

Murphy said video cameras captured activities on the pier prior to the event, including the mayor, his wife and a Manatee County sheriff’s deputy arriving at 7:45:30 a.m. and Carter at 7:47:28 a.m. Tripp arrived at 8:03 a.m.

Murphy said he chatted with Tripp, before the rest of the people at the opening made their way to the T-end.

“There was no sunshine violation here, as alleged in this article,” Murphy said, referring to an opinion piece in the newspaper. “This article is totally false, it’s mean-spirited, it’s bullying and it’s libelous.”

He did not offer the recording or a transcript of the meeting to The Islander.

The alleged violation was detailed in the opinion column by Bonner Joy, publisher of The Islander.

The next commission meeting will be at 2 p.m. Thursday, July 16, at city hall, 10005 Gulf Drive. Information on participating by phone is provided with the agenda on the city website at cityofannamaria.com.