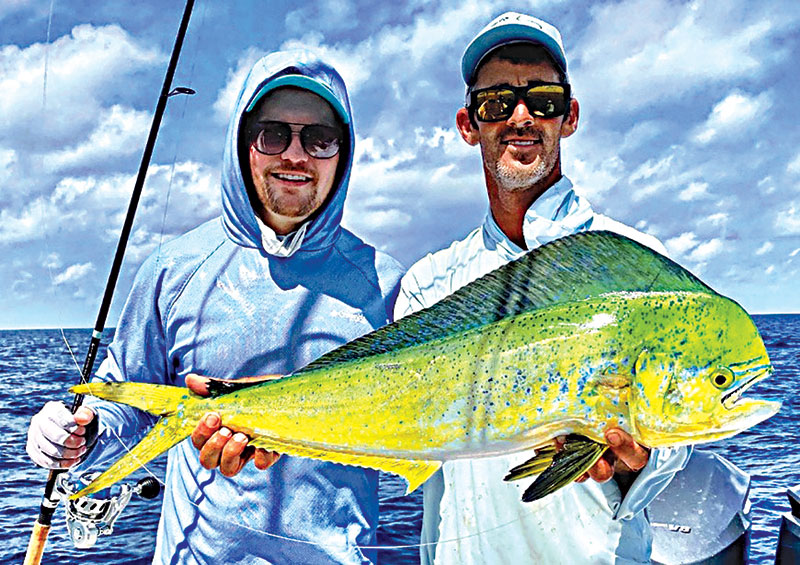 Mahi wowie Capt. David White, right, and angler Spencer Dienes, a radiologist in Miami, show off what White termed “a respectable little mahi-mahi” caught Sept. 2 on a live shiner in about 120 feet of water off Anna Maria Island. Dolphinfish, Coryphaena hippurus, also known as mahi-mahi or dorado, can run up to 63 inches and 88 pounds, but it’s common to find fish of 30 pounds. The fish is capable of flashing purple, chartreuse and a wide range of other colors. 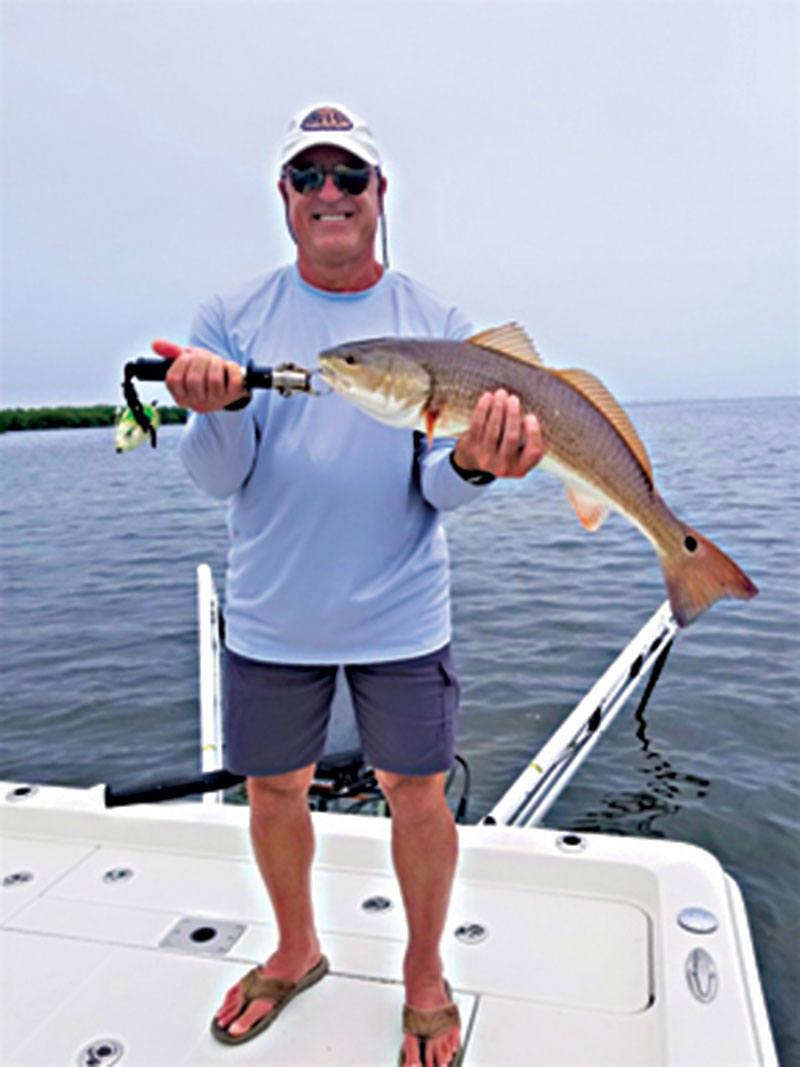 Darryl Dewort of Odessa shows off one of several redfish he caught Aug. 22 while fishing inshore in Sarasota Bay using shiners as bait. All fish were released. Dewort was guided on the fishing trip by Capt. Warren Girle. 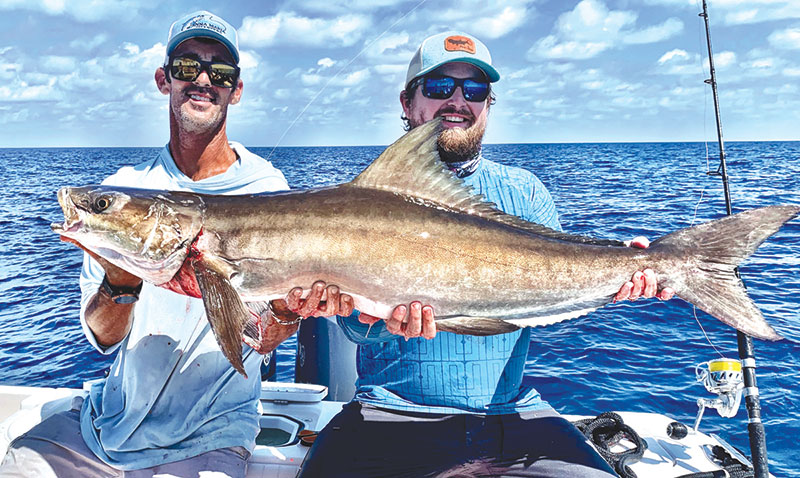 Capt. David White of Anna Maria Charters helps Jess Sturtevant of Bradenton Sept. 2 to hoist his catch, a cobia in the 60-pound range, for a trophy photo. “This animal popped up right behind the boat in 160 feet of water and ate a live pinfish,” White said.

Fishing around Anna Maria Island remained consistent despite the fresh water draining from the Manatee River to the bays.

The fresh water is pushing catch-and-release species —trout, redfish and snook — into Tampa Bay and Anna Maria Sound. Patrolling these areas around the mouth of the river is advantageous in September, when we experience a lot of rainfall, because its possible to find good concentrations of fish.

Schooling redfish are being found in this manner, as are large schools of snook. The reds are on the feed, but for the snook you may have to experiment.

Some groups of fish I’ve located won’t eat, while others are more than happy to take a bait. When you run across the stubborn ones, you’ll know it. Give them a few casts and if they don’t take a shiner with a hook in it, move on.

Spotted seatrout are being found throughout Anna Maria Sound, especially over deep grass flats. Rallies of 20-30 trout are attainable without even pulling the anchor.

Moving offshore, amberjack are being caught in good numbers, which suits anglers who want to go head-to-head with strong fighting fish.

For the dinner table, there are plenty of yellowtail and mangrove snapper.

On my Southernaire charters, the inshore action in the deep grass areas is good. Ladyfish, jack crevalle and bluefish are filling the gaps between the bites from catch-and-release spotted seatrout. This results in practically every cast yielding a fish.

The catch-and-release snook action can be consistent, depending on what schools of snook you’re fishing. Some are cooperative, others are stubborn.

Capt. Warren Girle is finding good action on the deep grass areas of Sarasota Bay by anchoring and chumming. Fishing over deep grass flats in 6-8 feet of water yields a variety of species, including mangrove snapper, bluefish, ladyfish, jack crevalle and catch-and-release spotted seatrout. All of the species are being caught using live shiners as bait.

In shallow areas of the bay, where oyster bars and mangroves are present, Girle is finding catch-and-release snook and redfish — both are taking live shiners as bait.

Capt. Jason Stock is taking advantage of the light winds and calm seas to venture offshore. While offshore, he is putting anglers on numerous amberjack. Also, clients are hooking yellowtail and mangrove snapper, as well as a rainbow runners.

On windier days, Stock is remaining in Tampa Bay, where he’s finding action for clients on flounder, mangrove snapper and some juvenile tarpon.

Jim Malfese at the Rod & Reel Pier is seeing catch-and-release snook caught with frequency — but not as often as the mangrove snapper. Pier fishers using live shrimp as bait are putting limits of snapper in their coolers on good days.

Other catches include catch-and-release redfish, ladyfish and jack crevalle. Casting silver spoons or jigs from the pier is yielding some action for the pier anglers on Spanish mackerel.

Capt. David White is seeing a migration of cobia on his days offshore. He believes it’s a little early, but he’s beginning to see them and manage a hookup or few in our local waters.

White also is hooking into offshore is mahi. Although not a consistent bite, it’s always rewarding to come across these fish in our waters. Other offshore catches include red grouper and an assortment of snapper, including mangrove, yellowtail and vermilion.