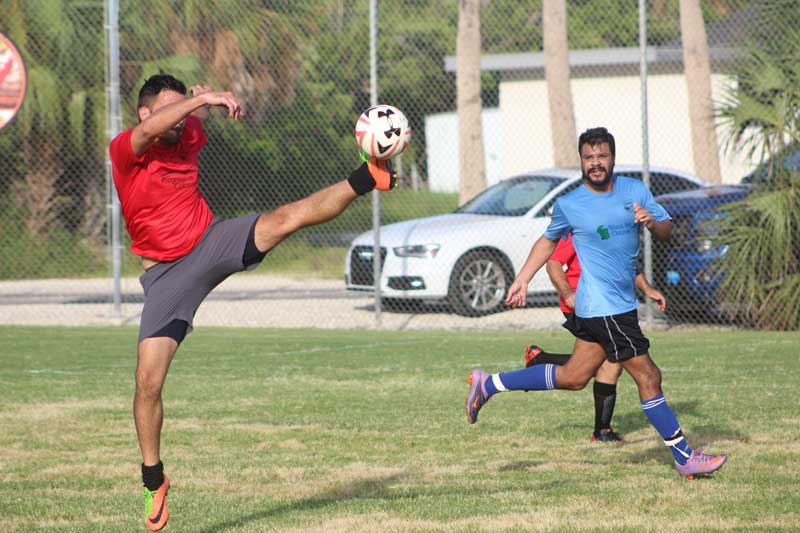 Progressive Cabinetry’s Kris Yavalar stretches out to settle the ball July 26 during adult soccer action against Bins Be Clean on the pitch at the Center of Anna Maria Island. Islander Photos: Kevin Cassidy 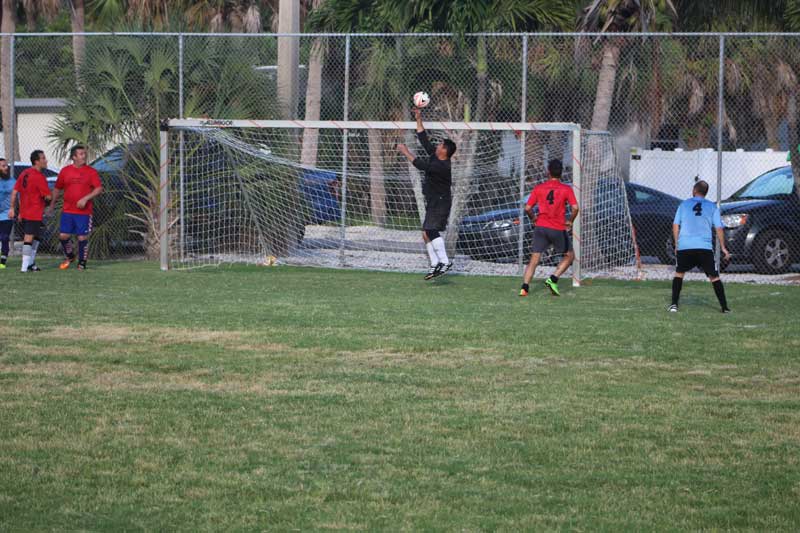 Progressive Cabinetry goalie William Case tips the ball over the goal to deny a Bins Be Clean scoring chance during adult soccer action at the Center of Anna Maria Island.

After two weeks of action in the adult coed soccer league on the pitch at the Center of Anna Maria Island, Lancaster Design has surged to the top of the standings with a 2-0 record.

Right behind the designers are Moss Builders and Sato Real Estate with matching 1-0 records, while Progressive Cabinetry sits alone in fourth place with a 1-1 record.

Bins Be Clean and Mar/Kis Insurance are tied for the fifth spot with matching 0-1-1 records, while Ross Built is still in search of its first victory at 0-2.

Hogan and Glavan finished with two goals each, while Avinaj John paced the squad with three goals. Kris Yavalar added a goal and Hakan Toka completed the scoring with a goal and two assists. William Case and Steve Velliquette combined to make seven saves in goal to help preserve the victory.

The second match of the evening saw Sato Real Estate record a 5-0 shutout victory over Ross Built. Josh Sato led the way to two goals, while Zack Lieb, Cemal Duzgan and Jessica Williams each scored once. Scott Bear made five saves in goal to preserve the shutout.

Goalie Ben Sato made seven saves to lead Ross Built in the loss.

The last match of the evening saw Lancaster Design outlast Mar/Kis Insurance by an 8-5 score. Robert Armstrong had a hat trick and two assists to lead Lancaster, which received a goal and an assist from Adam Mott and Murap Akay. Nate Talucci and Steve Oelfke each scored once, while goalie Jordan Demers came through with eight saves and contributed a goal on offense.

Mar/Kis Insurance was led by Shay Coleman’s two goals and an assist and two goals from Tony Morales. Joel Sanchez completed the Mar/Kis scoring, while also making four saves between the pipes.

High scoring match
The youth soccer league at the center completed its second week of indoor action July 24 in the 9-12 age group. The standings are pretty tight for the Ugly Grouper Red and Blue teams, both sporting 1-0 records, while White fell to 0-2 after Tuesday’s action.

UG Blue edged UG White 11-10 behind an incredible 10 goals from Jackson Pakbaz and a trio of goal keepers. Michael Coleman, William Pakbaz and Caden Quimby combined to make 14 saves to help preserve the victory, while Frankie Coleman added a goal and two assists to the Blue offense.

Connor Samblis paced the White squad with seven goals and an assist while Riley Lawson added a hat trick and two assists in the loss. Kane Richardson and Victor Albrecht kept White in the game with a combined 12 saves.

Key Royale Golf news
The women golfers at the Key Royale Club played a nine-hole individual-low-net match in two flights July 24. Carol Duncan was the outright winner in Flight A with a 3-over-par 35.

Flight B was captured by Janet Razze with a 2-under-par 30. Sue Wheeler was alone in second place with a 1-over-par 33, while Terry Westby, who had a chipin on the fourth hole was one stroke back in third place in the flight.

The men got on the course July 26 for a nine-hole scramble. The team of Herb Clauhs, Tom Nelson and Gary Razze combined on a 5-under-par 27 to earn clubhouse bragging rights for the day.

Horseshoe news
The team of Steve Doyle and Neil Hennessey were the only duo to earn a 3-0 record in pool play and were the day’s outright champs in the July 25 horseshoe action at the Anna Maria City Hall horseshoe pits.